To say Hayley is obsessed with Doc McStuffins, is an understatement. I remember attending Blogher 12 and going to a Disney Interactive Breakfast. There they talked about the new shows with Doc McStuffins being on the agenda to be released that year. I remember thinking how much Hayley would love this and I was so right! Now Doc McStuffins runs on the TV whenever it is on. It is one of her absolute favorites! 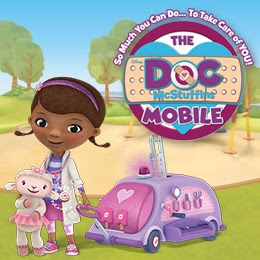 Now the ACCLAIMED DISNEY JUNIOR SERIES “DOC MCSTUFFINS” INSPIRES
INTERACTIVE HEALTH-FOCUSED “DOC MOBILE” TOUR, KICKING OFF
SUNDAY, AUGUST 18 IN BOSTON!!! If you are not Boston based, do not worry, as they will be touring major US cities this coming season! 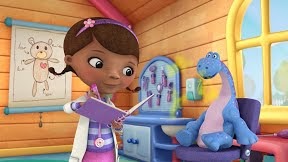 The Doc Mobile, a 27-foot Airstream trailer custom-made to reach young kids (age 2-7) and families with fun and empowering experiences relating to health and nutrition will embark on a multi-city tour SUNDAY, AUGUST 18 in Boston. Themed “So Much You Can Do…to Take Care of You!” the initiative is inspired by Disney Junior’s acclaimed “Doc McStuffins,” the animated series that models good health and compassion through stories of a young girl, a would-be doctor, who cares for her ailing stuffed animals and other toys. The Doc Mobile features an area for kids to perform a “check-up” on their own toys plus other activities and age-appropriate health and wellness lessons including nutrition and physical development and fitness. 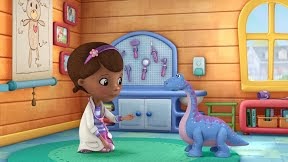 Doc McStuffins the character debuted this past weekend at Disney’s  D23 Expo 2013 and will be on-hand to greet fans at select stops along The Doc Mobile tour route.  During the multi-city tour, kids and parents will also have the opportunity to meet real-life doctors from the Artemis Medical Society, an organization of more than 2500 female African-American physicians from around the world who formed their group after seeing a reflection of themselves in “Doc McStuffins.” Recognizing the opportunity to further inspire young girls, the group serves to nurture, mentor and provide the foundation necessary to create a diverse physician workforce. 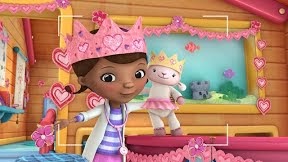 A “Doc McStuffins: The Doc Mobile” game and other digital activities including one that invites boys and girls to create a customized doctor avatar, will debut on DisneyJunior.com/Doc on Friday, August 30. Also debuting that day is a preview of the season two premiere “Doc McStuffins Goes McMobile/Chip Off the Ol’ Box”  WATCHDisneyJunior.com, the WATCH Disney Junior app for smartphones and tablets, and Disney Junior on Demand. It will become available for download on iTunes, Amazon and Xbox beginning Saturday, September 7

Fans are invited to follow The Doc Mobile tour route on  Disney Junior’s Facebook page and on Twitter at  @DisneyJuniorUSA, #DocMobile. Scheduled tour dates are as follows (all events are scheduled from 10:30 a.m. – 4:00 p.m. unless otherwise noted); a full schedule will be posted at DisneyJunior.com/DocMobile beginning Thursday, August 15:

Fort Worth Museum of Science

**A winner among preschoolers and their parents, “Doc McStuffins” was 2012’s #1 cable TV series in Kids 2-5 and the #1 cable TV preschool series in Total Viewers and Women 18-49.* The popular series has inspired the creation of brand extensions across other Disney businesses. The award-winning “Doc McStuffins Time For Your Check Up Doll” was lauded as 2013’s Preschool Toy of the Year by the Toy Industry Association.  The “Doc McStuffins Time For Your Check Up” app launched in April 2013 as the #1 paid entertainment iPad app, and the series recently debuted two new appisodes for the Disney Junior Appisode app for iPad, iPhone, and iPod touch. There are over 50 “Doc McStuffins” book titles from Disney Publishing, a soundtrack and two DVDs from Disney Studios and the series is prominently featured in the popular “Disney Junior Live on Stage!” attraction at Disney Parks & Resorts.

Created and executive-produced by Humanitas Prize and Emmy Award-winning Chris Nee (writer on “Little Bill” and producer of “Deadliest Catch: Crab Fishing in Alaska”) and directed by Emmy-winning Norton Virgien (“Rugrats”), “Doc McStuffins” is a production of Dublin, Ireland’s Brown Bag Films in association with Disney Channel. The Hollywood Health & Society division of the USC Annenberg Norman Lear Center serves as its health and medical consultants, advising on basic health issues that are relevant to young kids and families.

Come out and see the #DocMobile tour today!!! Your Doc McStuffins obsessed children will thank you!!

Saturday’s Top Five Laughs- Come Join Our Blog Hop!
I am definitely a #ReebokMom with my new kicks!