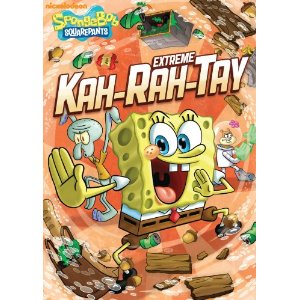 Hayley and Zane both love this DVD. It is great because it is broken down to around 11 minute episodes each, so they could watch one when I am getting dinner ready, eat, and then watch another one after dinner. I always tell them they could watch 3 episodes each day and they usually pick Face Freeze, Extreme Spots, and Squid Defense. Hayley got introduced to karate through this DVD and now wants to take it! It is actually really cute to see SpongeBob partake in his love of karate. The action, the fun, and the animation makes SpongeBob SquarePants: Extreme Kah-Rah-Tay a winning DVD!

*We received a copy of the DVD for review purposes. As always, all my opinions are my own and not swayed by outside sources.