Disney and Pixar’s original series “Cars on the Road” debuted exclusively on Disney + last week. The Disney+ Original series follows Lightning McQueen (voice of Owen Wilson) and his best friend Mater (voice of Larry the Cable Guy) as they head east from Radiator Springs on a cross-country road trip to meet up with Mater’s sister. “The series is a romp across the country with Lightning McQueen and Mater,” says director Steve Purcell. “Like any real road trip, every day is a new mini-adventure with unexpected twists and turns.”

1. What were the advantages of doing a short form series on Disney+ with Cars on the Road? – asked to Marc

2. Why was a cross country road trip an ideal starting point for this series of shorts. – asked to Steve 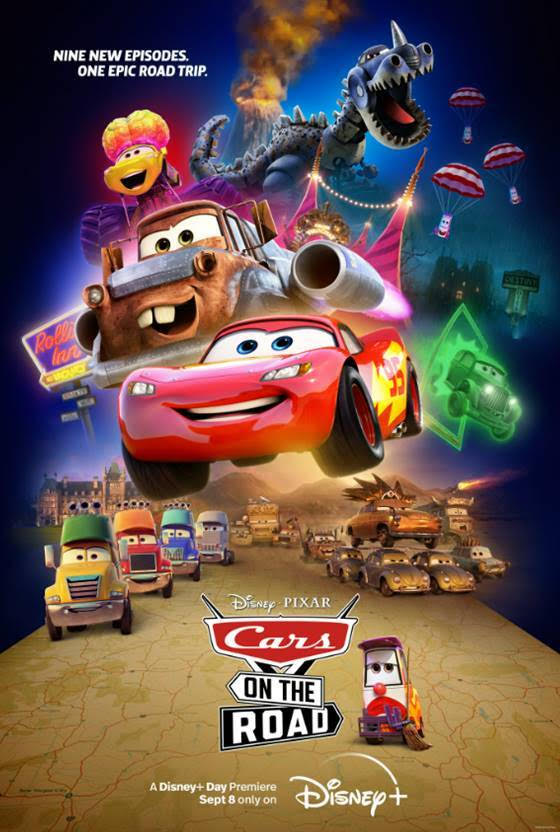 3.  Brian, how did you, Steve, and Bobby kind of collaborate together to make the series cohesive?

Brian said all three of them have been in the franchise since the beginning so they know each other well. They are all heavily rooted in the characters.  All of them have different personalities and that is what makes this franchise work.

Larry said all the episodes are his favorite and he can’t pick one.  When Larry goes into the studio they have a funny sketch already written and he just does the voice and is creative with it. But the true genius behind it is the writing and the creativity of what Mater’s going to do.

5. What were some of the new character dynamics you wanted to explore in the series that you hadn’t gotten to do before in the franchise previously?  -asked to Steve

McQueen and Mater have spent this so much time together continuously in all of the stories.  They come together and go apart.  This time they are on the road trip together so there will be some arguing along the way.  We get to see McQueen being a know-it-all, but then getting brought low in the haunted house, kind of forcing them to have to stay in that place that Mater didn’t want to stay in.

6. What’s your favorite movie reference and or Easter egg in Cars on the Road?

The Pizza Planet truck makes an appearance throughout the entire series in every episode. But his favorite personally was the kind of the Harryhausen stop motion assimilation they did in Dino Park.  That was fun to watch the animators craft that. Letting the animation team do their thing and  watching Steve direct that.  And just have fun with it and just all the homages are really fun to kind of dig into and watch.

Brian said besides Mater would be the motel keeper, desk clerk as they go into the haunted motel because as a kid he loved haunted house movies.  He loved that genre.

CARS ON THE ROAD is streaming exclusively on Disney+ Now!

*Thanks to Disney for inviting me to this press junket. All opinions are my own.*