When we were in LA last month previewing the new Tinkerbell movie, Tinkerbell and the Legend of the Neverbeast, my very first remark was how awesome the music was. You don’t think much about the background music and sound effects when watching movies, but in this movie, you just have to. The music is what brings the emotions to life of the characters. We had the change to interview the Music Supervisor Brett Swain & Bleu and see just how potent the music is to this movie. 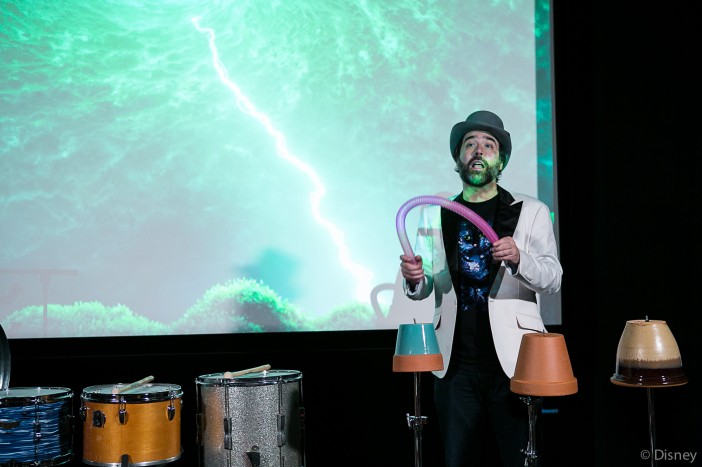 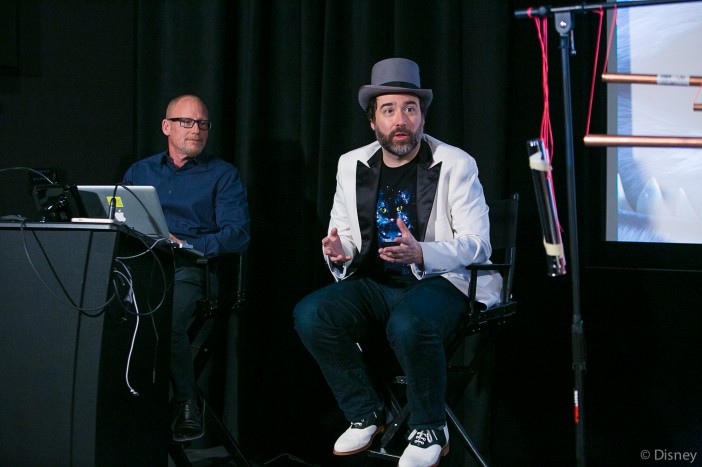 When we entered the room, there was Brett Swain and Bleu set up with a lot of instruments around them. Some were traditional sounds of bells, while others were noses made out of tubing. It was quite interesting to hear the different sounds they used in Tinkerbell. We were able to close our eyes during various scenes while they played the instruments, to see how the music brought the scene to life.

Bleu spoke first and told us that he produced all the songs in the film. For each of the characters, Brett agreed, they have themes that are important to the film.

” A lot of times when we come up with these themes, they’re Melodic things. They’re tunes and for this film, we not only wanted melodic themes for the characters but we also wanted just really peculiar and unique sounds. In the case of Gruff, primitive and ancient,  because we don’t know where he’s come from. There’s a part of Pixie Hollow that we haven’t been to before. Steve wanted to challenge Bleu, to come up with unique sounds so that the minute you heard it, we knew it was associated with that Character.” -Brett Swain

This has been Brett Swain and Bleu’s first collaboration and to work on a Disney film, they both said, has been nothing short of amazing! Brett Swain told us he got involved with the film because the director Steve Loter had been a big fan of his artist career for many years. While Steve was working on the film, he was listening to a lot of his records. He tells us that his albums were a sort of soundtrack to his film.  Steve Lotter did not tell him it was for a Disney film, so when he went to the studio to start production, he was so excited! 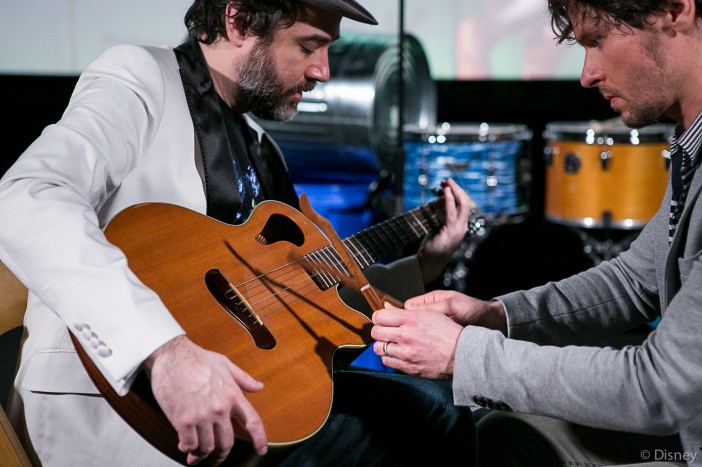 “The producers wanted the music for this film unique, not just within the context of the Fairies Franchise but unique for really anything. I really challenged myself to try to come up with things that you hadn’t heard before and I knew I wanted a really percussive score especially because one of my main directives was to come up with a sound for Gruff because he’s the new character.He’s a larger than life and aging character. We already know that he’s lived for thousands and thousands of years and in the old Fairy lore, he’ll probably live for thousands and thousands more, if not for forever. Percussion instruments being probably the first instruments that man ever played. We think of those as being very primitive but I didn’t want to necessarily just draw from percussion instruments of the world because a lot of times those put you in a very specific place, La Tabla from India or the Celtic Frame Drum or, whatever it happens to be.” -Brett Swain

To make the sounds they went to toys stores and home depots to find unusual percussive sounds that don’t come from your typical sample library. They truly wanted to find an unique sound that you have never heard of before. For the sound of Gruff initially they used pots and outdoor planter, in addition to the percussion instruments, to make the perfect sound.  They could get so many different pitches out of all the pots. They aimed for a primitive, early sound for Gruff especially in the beginning scenes. When Gruff was bouncing around, they used a large set of Toms to create the sounds of a big creature. They certainly succeeded in making all the sounds unique! 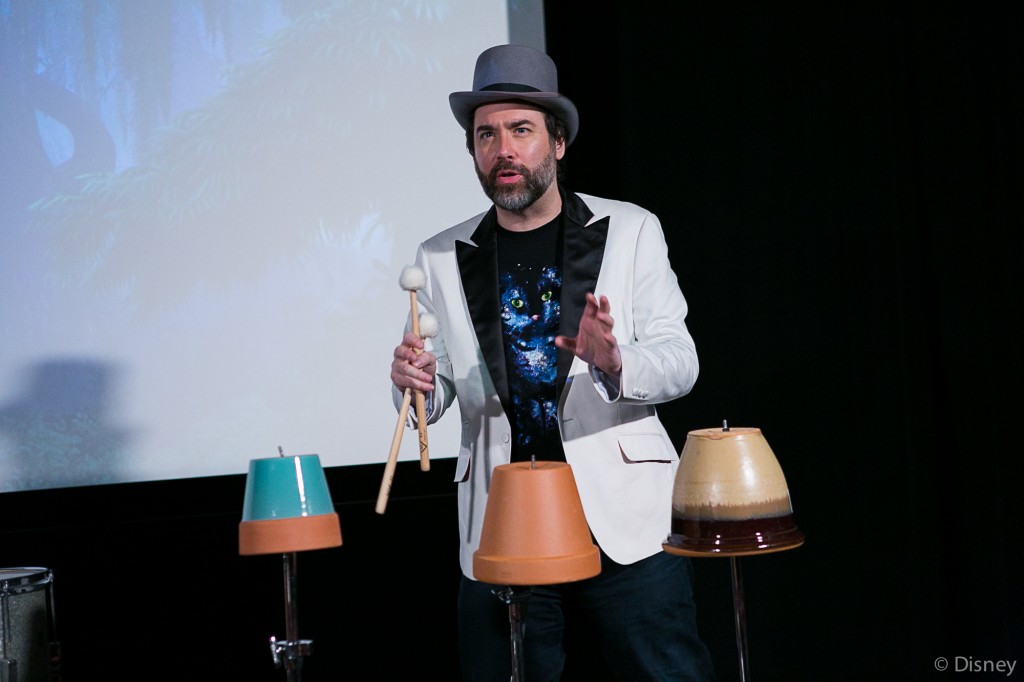 “The Percussionist that I worked with on the film, Joe Siders was looking for unique ways to play acoustic stringed instruments and we stumbled on this idea of using Dulcimer Hammers. So these are normally used to play Hammer Dulcimer but we found that through some practice, I could fret the instruments while he used the hammers to play the strings . It’s actually interesting, it takes two people to play this technique . We also used Mandolin and Classical Guitars and down tuned Guitars and high strung Guitars. It’s what they call a Nashville strung Guitar. It’s the high strings from a set of 12 strings and we used this for Fawn. And part of the reason why is it’s a very versatile instrument is because you can play sad things. Actually the hammers traditionally have leather on them which although still percussive gives it kind of a mellow tone whereas some of the lower strung instruments would have a different feel than the high strung instruments or the Mandolin.” Brett Swain

The main thing we learned that day was how truly unconventional the sounds all were.  From drumming together with pots and other unique hardware finds, they made the music distinctive and in tune with the characters in this movie. 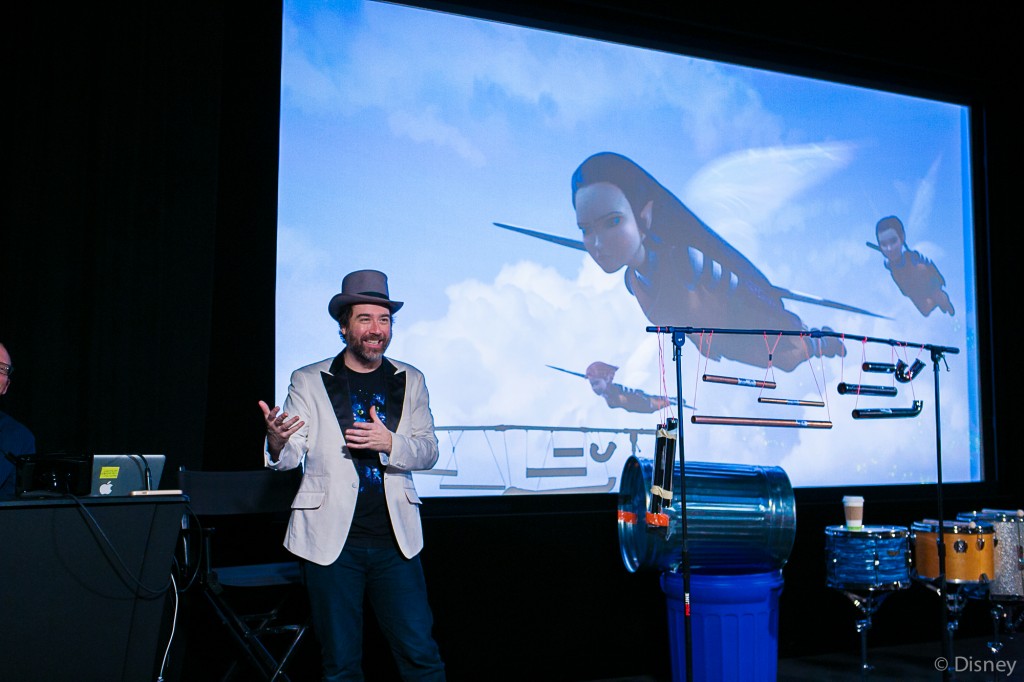 Tweet
Share
Pin
0 Shares
Why you should buy Tinkerbell and the Legend of the Neverbeast?! My Movie Review…
Loyal Hana Maternity Clothes!