I had the pleasure to screen Tinker Bell and the Legend of the Neverbeast in LA a few weeks back and I have to say, that while I LOVE all of the Tinker Bell movies Disney has made, this is my favorite one. As with all the Tinker Bell movies, they delve into the importance of teamwork, friendship, and showing how important doing the right thing truly is. While this movie was filled with important lessons that I want to showcase to my kids, it was also an extremely fun movie. Without giving too much away, I will say that I might have shed a tear at the end. This is your warning to bring tissues to view this magnificent movie.

I had the chance to sit down with Producer Makul Migert and Director Steve Loter when we visited the Disney Toons Studio a few weeks back. They both were very gracious to answer any questions we had . What I liked best about this interview, is that they truly  love what they do and are incredibly proud of this film, as they should be! 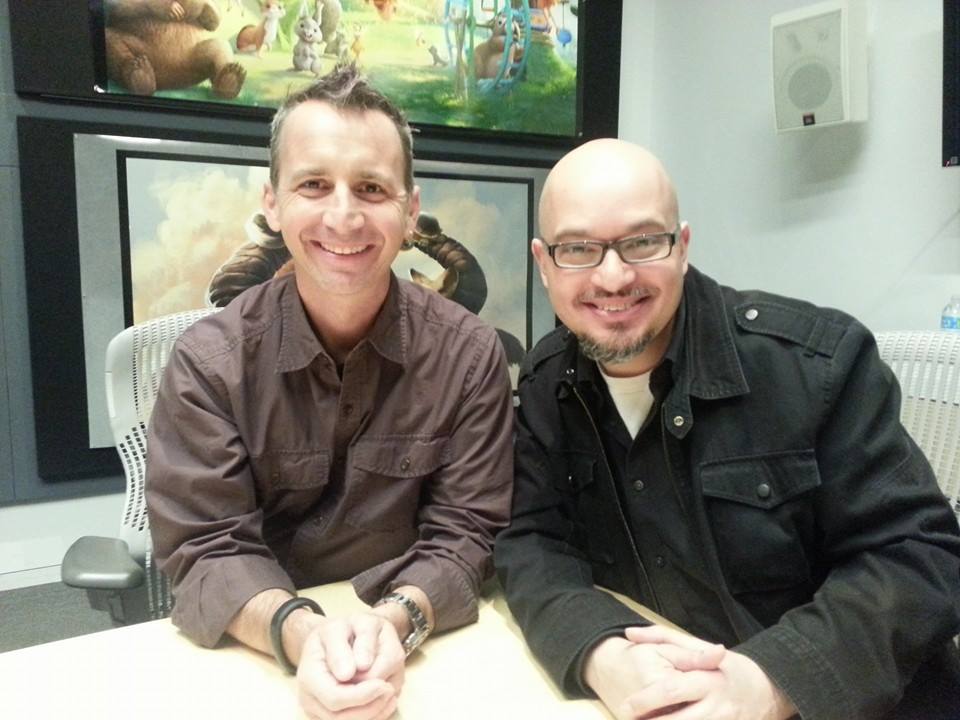 When we began we wanted to know about the process of animation and what their favorite parts of doing animation are. Makul Migert told us his favorite part is the actual collaboration and seeing the work come to the big screen through the work of an incredible team of artists. It takes a huge team to make any Disney film. I think this resonated in me over and over again when I visited Disney, was just how much goes into making each film. It is amazing to me to see just the amount of sheer work and determination there is to make each and every film.

“It’s been an absolute joy seeing Steve’s idea, which started 4½ years ago, and through story boarding and design into animations. To see that coming to life through the artistry with some amazing people was absolutely a joy.” -Makul Migert

Steve Loter then went on to tell us the idea behind Tinker Bell and the Legend of the Neverbeast was from his daughter. He told the story that growing up he never had any pets and was actually fearful of large animals. Then he started a family and moved to a neighborhood with lots of large dogs. His daughter would run up and pet these animals and it showed Steve how loving these animals are. His fear began to subside and realized through his daughter, that animals are friends with loving hearts. Then came the idea that he  would showcase a really big animal with a really big heart. Gruff was then introduced with Fawn being the ultimate and compassionate animal lover. 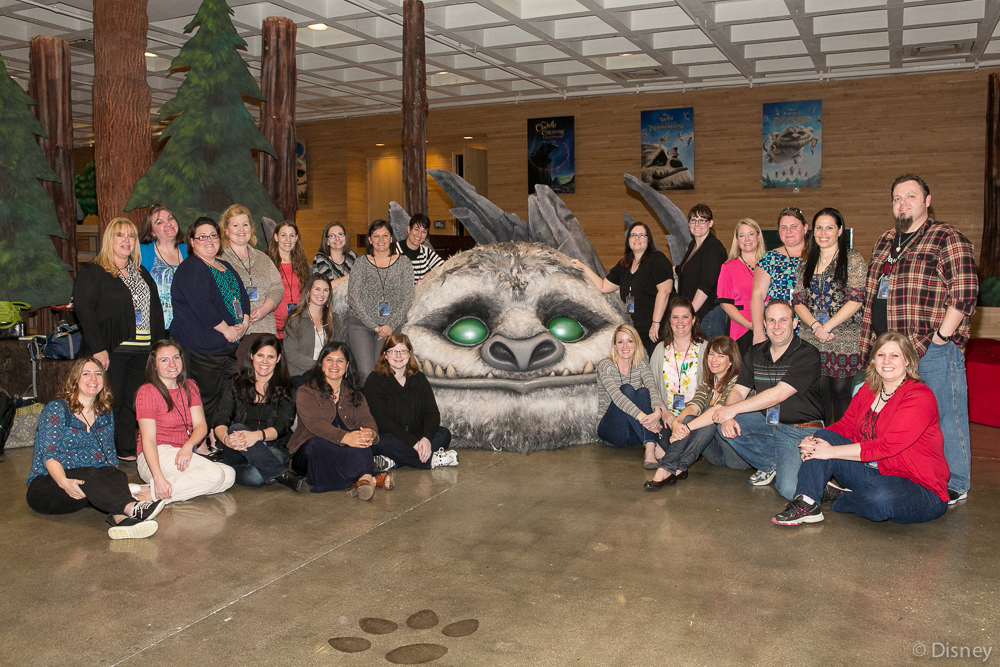 “Fawn, the animal town fairy loves animals unconditionally. She takes care of animals and she encounters a creature that can be perceived of as a monster and her open heart’s gonna’ be put to the test. And I thought, Okay this is a message, this is a good message for Fawn, the character to have and for my daughter to learn to. It’s beautiful to think with an open heart. To see the world through that prison, through that perspective is a wonderful thing, but you also have to think with your head. You need the balance to have a happy life and I thought that’s exactly the story that I wanted to tell.” -Steve Loter 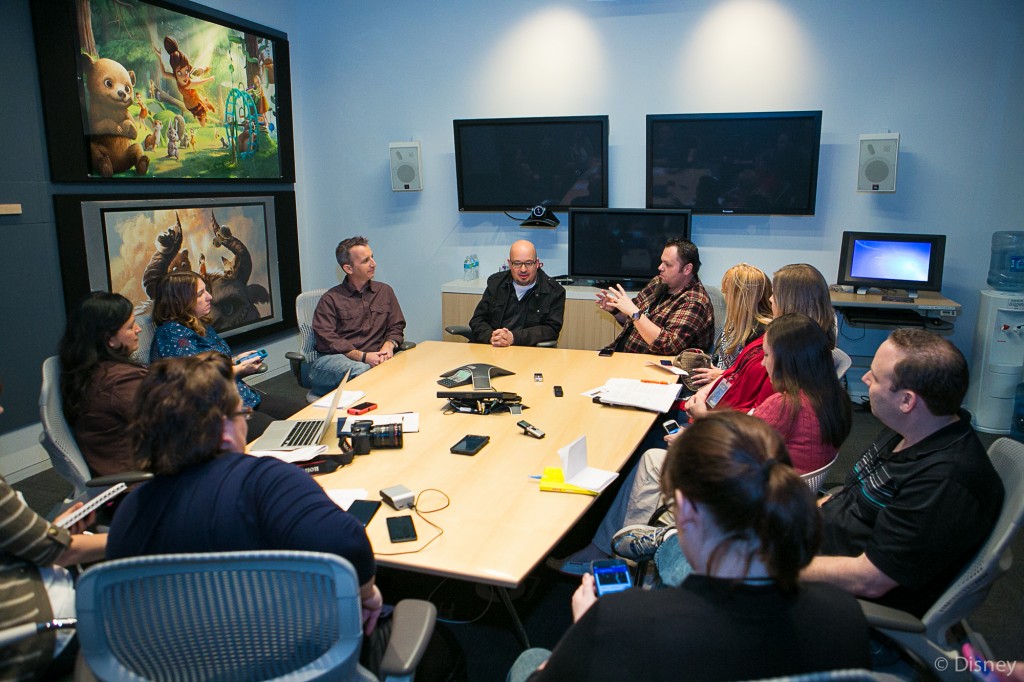 He took a lot of the inspiration for Fawn directly from his daughter from her reactions to her emotions. She actually makes a cameo as Calista, the bunny who refuses to hop.  While this movie is about fairies and monsters, Steve Loter reiterated that it is really about family. He pulled this story from a very personal place. Even the character of Nyx, the Scout fairy, was basically Steve and the way he is.  It was  his family life with some name changes to protect the innocent.

“And not just with my daughter, Nyx the Scout Fairy, the over protective Scout Fairy is me. She was a very easy character to write for because that’s the helicopter parent that I am. I am the parent that you go to the park and you’re on the monkey bars and I’m concerned.  I wanna’ point out that Nyx is not a villain. Nyx has a point of view. She’s right about it. She’s trying to protect Nixie Hollow. She believes in this strongly. It was really important for me that it was a point of view that was real and believable and realistic.”- Steve Loter

Makul Migert then went on to tell us that the story of Tinker Bell and the Legend of the Neverbeast never changed from the initial pitch they did for this movie. He told us while there was some small changes, the story line and the characters stayed the exact same from their very initial idea. As for the casting, the both knew they wanted Ginner Goodwin to play the part of Fawn.

“We’ll we knew we wanted Ginnifer Goodwin. We loved Ginnifer Goodwin and her voice. We knew she was going to be Fawn. That was easy for us. We had a conversation about who would be playing against her and we wanted somebody who could contrast the joyful bubbly nature that was Fawn. And so for Nyxz, we then discovered Rosario. And when we brought Rosario up she just has this cool voice. And you can hear her passion and her belief in what she feels is right and that contrast we thought was really beautiful and really nice.”- Makul Migert

Steve Loter told us that music is a very important part of his life. The Disney studios was a 2 hour ride by car from his house so he would listen to music a lot. He found Bleu (a popular singer/songwriter) was one he was listening to a lot and knew he had to have him on the film. He ended up becoming a big part of the musical composition on the film. Bleu became the featured instrumentalist bringing the sound of Gruff. The score was done by Joel McNeely, who was on all the past Tinker Bell movies.

They also told us they had the visual idea of Gruff from early on, it was just putting on the final touches later. They wanted to make Gruff have a lot of recognizable features that kids can see in their very own animals.

“So he has the walk of a Hippo or a Rhino. He has Horse fur like a Yack and it’s white. He has these floppy dog ears. He has an Armadillo tail that he can hang on stuff, but it also acts like a cat. You could tell his mood by the swinging of the tail and these big beautiful green cow eyes that you see your reflection in. Fawn sees a reflection in that. “- Steve Loter

They told us one of the hardest parts of the film was actually putting Gruff to animation. While they knew exactly what they wanted to accomplish with Gruff, the animation was hard because of Gruff’s physical hugeness.

“Animating Gruff was definitely a challenge and bringing him to life  because his scale is so much larger than the other characters. 6 foot character interacting with a 5 inch fairy. That proved to be very difficult because even just the choices in camera lengths,  you have to do something drastically different.” -Makul Migert 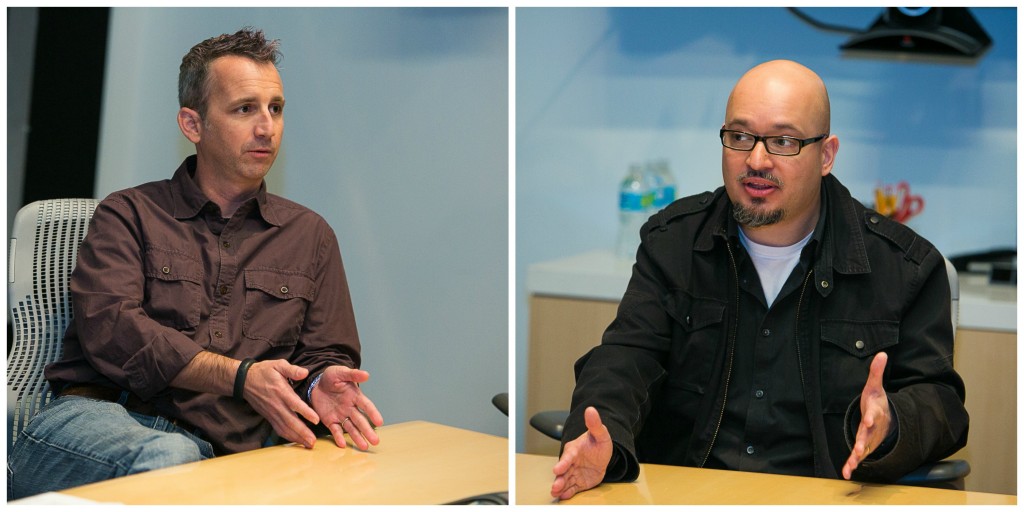 They also mentioned that while it was hard to film the end, they needed to end it that way because it is the reality of pets. Again without spoiling too much, I will say that the whole theatre was balling as was Ginnifer Goodwin when she filmed this. They never imagined the ending any other way, though. I have to agree, it was the perfect ending.

Next up for the two is vacation and continuing directing and producing other great Disney movies! After seeing the Tinker Bell and the Legend of the Neverbeast, I can’t wait to see what their future holds. I know I will be watching anything they do from here on out.

Tinker Bell and the Legend of the Neverbeast is available on Blu Ray, DVD, and Disney Movies Anywhere on March 3, 2014. Mark your calendars!