If you were watching the Academy Awards this past weekend, you know that Big Hero 6 won Best Animated Movie! If you have seen this movie, you know that this is very well deserved. Big Hero 6 is a truly awesome movie and is available for release TODAY! You want to make sure you head out to stores or buy Big Hero 6 online because this is a movie you all do not want to miss. This is the first Disney movie that incorporated Marvel characters and is set in the futuristic city of San Fransokyo.

On my press trip to LA, I had the chance to interview the directors and some of the actors in Big Hero 6. Our first interview was with Ryan Potter, who voiced Hiro. Hiro in the film is the orphan who lives with his older brother, Tadashi, who is a robotic genius. He needs some guidance on his choice of decisions in life and this is definitely helped along the way by Tadashi. Tadashi is voiced by Daniel Henney. When both of these actors entered the room, they were so willing to talk to us and were unbelievably gracious. Before I go any further and tell you about the interview with them, I will tell you that both of these actors looked so much like the Hiro and Tadashi we see in the film. It was quite uncanny. That was the very first observation I made. 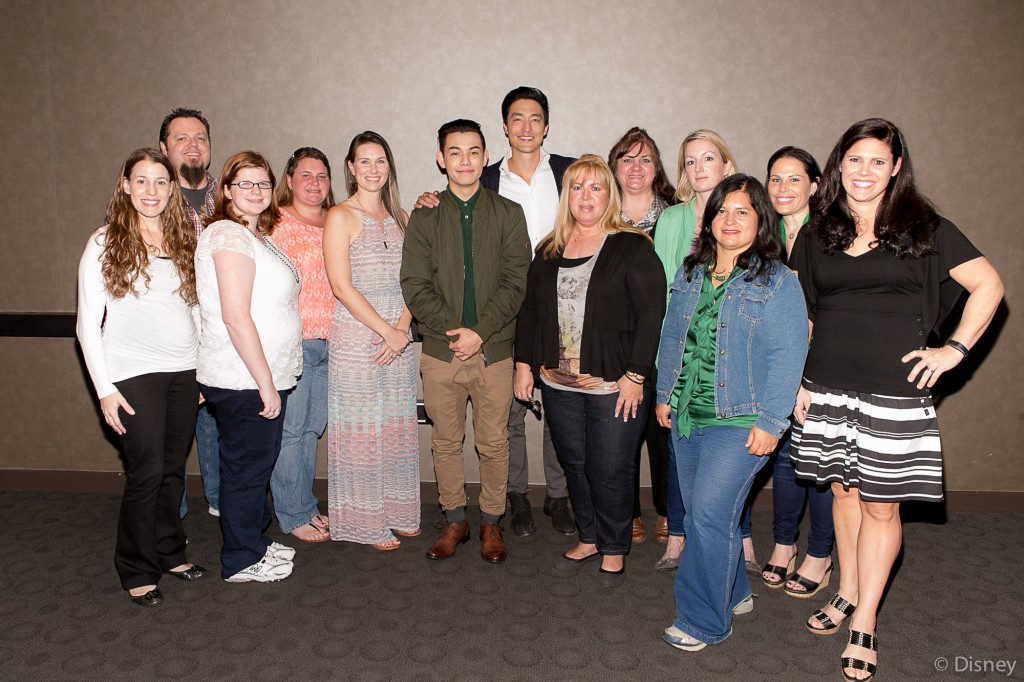 When they began, we were interested to know if they loved all the science and robotics of this film. Ryan Potter told us that while he loves robotics it is more the final product of putting together his masterpieces that gives him the inspirations. For example, he loved Legos growing up but what was more important to him was what these masterpieces created and putting together all his visions he had trapped in his mind.

“It’s very meditative for me to use my hands and to build things, it was awesome. Like, being able to voice Hiro because that’s literally who I was  four years ago- I was that kid. I think I still am.” -Ryan Potter

Since Daniel Henney was in the Wolverine movie, we wanted to know about his love of comics. He told us that while it was not hugely a part of his life, he was definitely interested in them. He liked comics such as Spiderman and the Incredible Hulk. While Big Hero 6 brought in the Marvel influence, he stressed to us that this movie was so much more. He told us that it was bigger than anything he ever done before.

Since there was a striking similarity with Daniel Henney look and that of Tadashi, we were interested in how the actor and Tadashi’s personality differed. He mentioned to us that most days he walks out of the house with a cardigan and a baseball hat, similar to what we see with Tadashi in Big Hero 6. However, the way he talked out their personalities really made me tear up. He truly loved playing the part of Tadashi.

“He’s made me a better person. He really has. You all are living in this world and we get caught up in things. Sometimes it’s hard to appreciate every moment like everyone preaches! It  was a beautiful opportunity for me to go and play this guy who is such a role model for a man should be at such a young age- so smart, beautiful, intelligent, caring, genuine,  the ultimate big brother, and he’s very selfless. And so every day using your voice- lending your voice to that, I would walk out of that room feeling like I just sat through a therapy session. I felt like I wanted to tackle the world. I’d be at the grocery store afterwards, just smiling and ran into people- probably creeping them out. He’s really helped me a lot.”- Daniel Henney 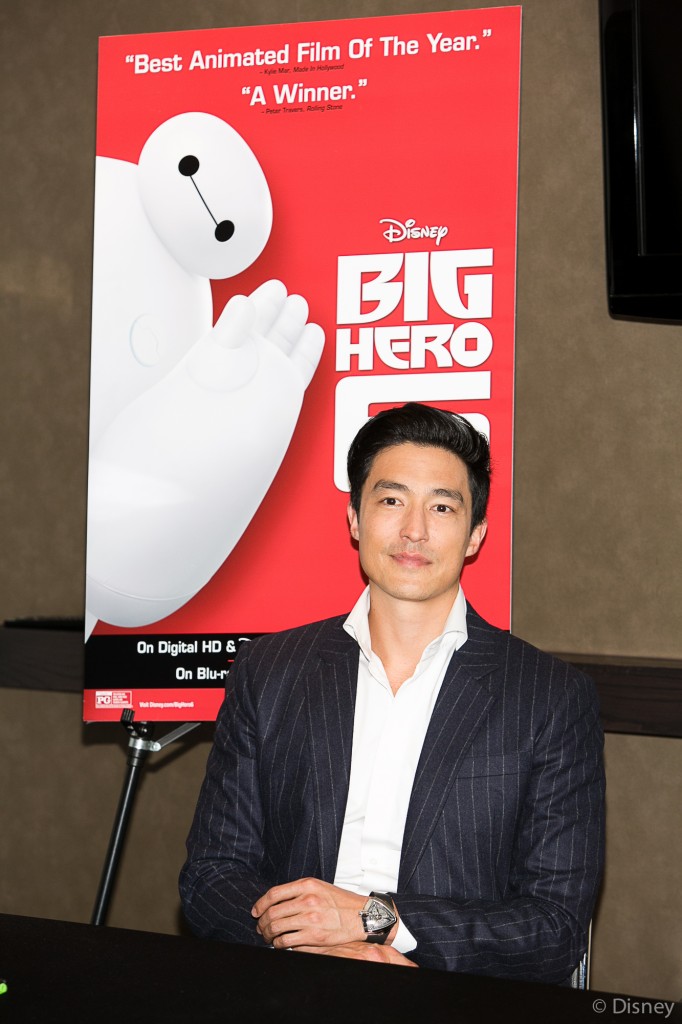 What absolutely fascinated me is that Ryan Potter and Daniel Henney did not meet until the very first screening. They voiced these characters perfectly with such a brotherly bond, but they did not meet face to face till the first screening. Isn’t that truly amazing?! Daniel Henney mentioned that from the first second they met, they had such a brotherly bond with similar characteristics and backgrounds. While they didn’t meet the other members of the cast either till the first screening, they both were excited to meet each other the most. True botherhood is what we saw the day of the interview and what we came away with after the interview finished!

They both said it was a huge honor being able to do the first multi-cultural,  multi-ethnic Disney characters ever.

*”It’s something with a Disney film, a wish and a fulfillment. It’s every kid’s dream come true to be able to be a part of a film like this and is really special because of that. Big Hero 6 is amazingly diverse and  it breaks the mold. We keep repeating it over and over, but the diversity is what makes it stand  up. I didn’t even realize that we were the first multi-ethnic Disney characters until the film had come out and somebody came up to me and said, well, how does it feel?”-Ryan Potter 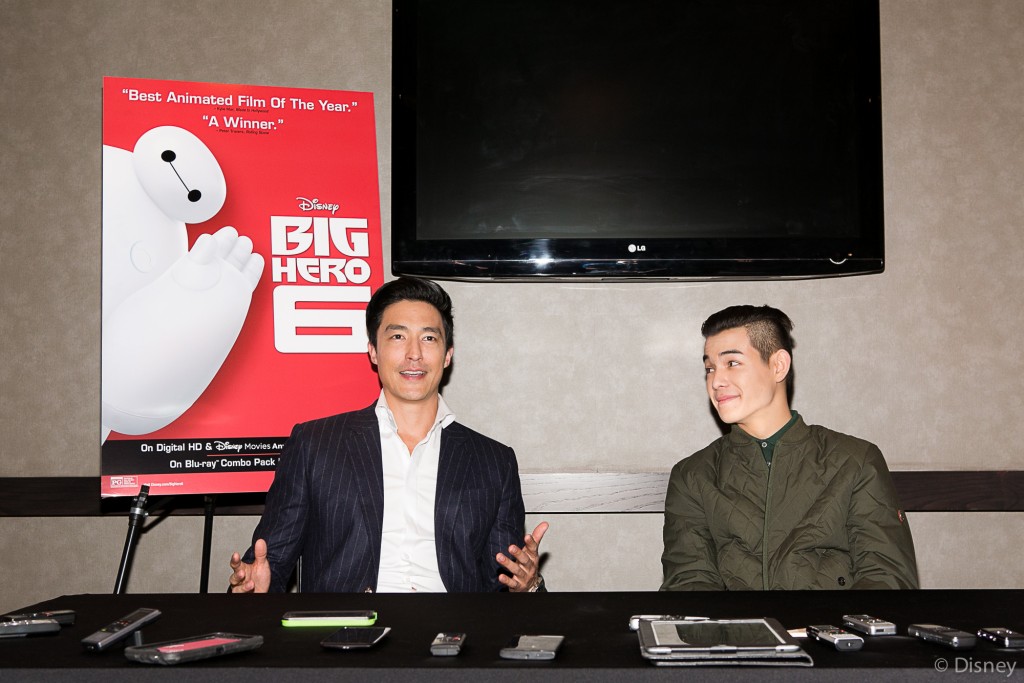 Daniel Henney always thinks about the importance of being an Asian actor when choosing roles. He told that he grew up in Michigan and when he grew up, there was not many Asian actors on television. He loves that Big Hero 6 allows Asian characters be seen in roles outside the typical martial arts shows and movies. He also loves that in Big Hero 6 they incorporate characters that are strong.

Since they were both Marvel fans before, we were wondering how it felt that they now can play characters with Marvel influence.

“I grew up on anime and manga. When I moved to the United States, I started reading Marvel and DC comics and I’ve always wanted to be a superhero. Now I don’t have to put on a cape and go fight crime at night. I got to be a superhero which is pretty neat.” –Ryan Potter 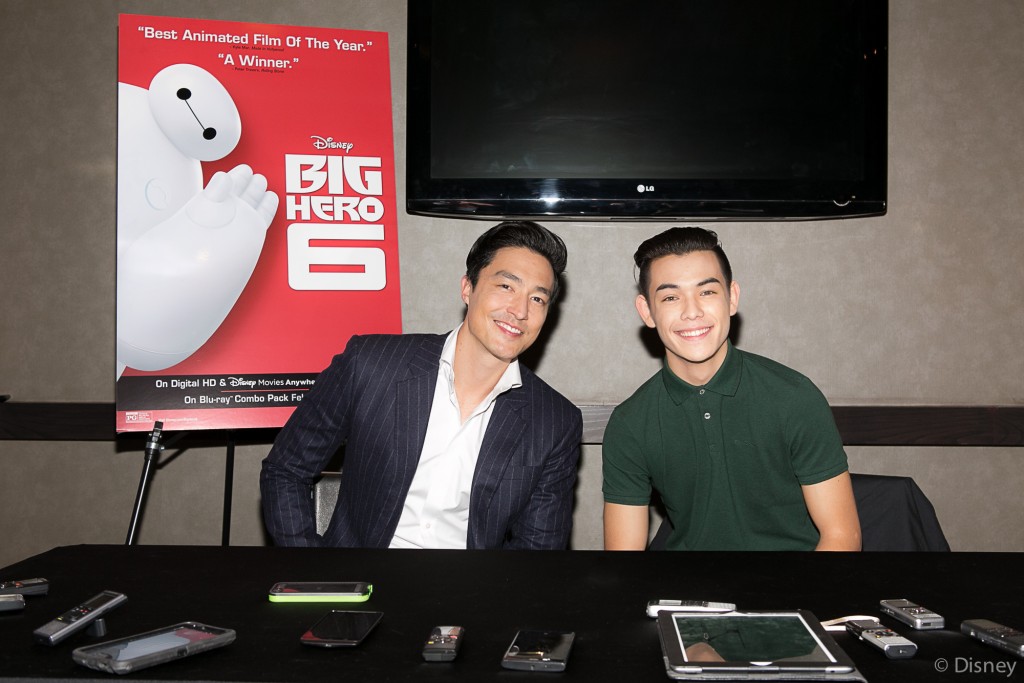 They said filming this movie allowed them to revisit their youth. Everything they did in the movie came from a real place.

“I wouldn’t say it grounded me or humbled me, I would say that it is part of my life that I got to kind of relive, re-experience in a very, in a very real way and honest way.” –Ryan Potter

It was very funny when Daniel Henney told us he was in the airport when he saw some boys playing with Hadashi figurines. He had to approach them to see where they got the figurines from. He mentioned it is all very surreal but also very exciting and fun.

While Big Hero 6 celebrates robotics and science, they said it is more about celebrating the outstanding individual with high morals, that believe in themselves. This film also freely allows one to express their interests.

We ended the interview talking about their future. Daniel Henney has a possible television show that you would not necessarily see an Asian-American taking on, in his new role. Ryan Potter is interviewing for colleges with the hopes to continue acting, directing, and designing.

I really enjoyed this interview and it made me appreciate the dynamics behind the characters of Big Hero 6 even more.