“MythBusters: Behind the Myths”

MythBusters starring Jamie Hyneman and Adam Savage plays Providence Performing Arts Center on December 15, 2013 at 7P! If you are fan of the TV show, MythBusters, now they will be performing it live right before your eyes at the PPAC, RI!

Providence, RI –   The all-new live show MythBusters: Behind the Myths starring Jamie Hyneman and Adam Savage, co-hosts of the Emmy-nominated Discovery Channel series “MythBusters,” will be performing at the Providence Performing Arts Center (PPAC) for one performance only on Sunday, December 15, 2013 at 7P. 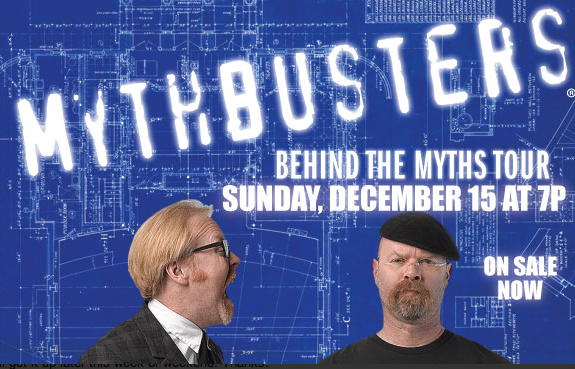 Tickets ($35 – $125; all tickets prices include a $3 per ticket restoration charge and are subject to change without notice) go on sale Friday, October 4 and can be purchased at the PPAC Box Office (220 Weybosset Street in downtown Providence), online at www.ppacri.org or by calling (401) 421-ARTS (2787). Box Office Hours are Monday through Friday, 10A to 5P; Saturday, 10A to 2P, and through curtain time(s) on show days.

About the show:
MythBusters: Behind the Myths presents a fantastical evening of on-stage experiments, audience participation, rocking video and behind-the-scenes stories.   With this show, for the first time, fans join Jamie and Adam on stage and assist in their “mind-blowing and mind-twisting” approach to science.

MythBusters: Behind the Myths brings you face-to-face with the curious world of Jamie and Adam as the duo matches wits on stage with each other and members of the audience. In 2012, the show played a sold out 28-city nationwide tour.

One of the Discovery Channel’s most highly regarded and watched series, “MythBusters” is now in its tenth season. Co-hosted by Hyneman and Savage, “MythBusters” mixes scientific method with gleeful curiosity and plain old-fashioned ingenuity to create its own signature style of explosive experimentation – and the supporting or de-bunking of urban myths that we live with day to day.

Adam and Jamie have become spokespersons at large for applying science to real life – most recently as hosts of the Discovery Channel special “iGenius: How Steve Jobs Changed the World,” and have appeared on numerous shows including “Late Show with David Letterman,” “Good Morning America,” “The Late Late Show with Craig Ferguson,” “The Colbert Report,” NPR’s “All Things Considered” and “Morning Edition,” “Countdown with Keith Olberman,” and many more.  They were invited to participate in Jon Stewart and Stephen Colbert’s Rally to Restore Fear And/Or Sanity and have received the Young Artist Award for inspiring young people in the interest of science.  “MythBusters” has been invited to participate on a panel at Comic-Con, where their appearances have sold-out four years running.

Adam and Jamie serve as guest editors for Popular Mechanics and were featured on the cover of the September 2009 issue.  That same year, they were inducted as honorary members into Sigma Xi, the Scientific Research Society.  They are Honorary Lifetime Members of the California Science Teachers Association and were named Honorary Engineers and Honorary Members of the Francis Crowe Society at the University of Maine.  Both Hyneman and Savage were given honorary Doctorates at the University of Twente in the Netherlands for their efforts at popularization of science.

Adam and Jamie produced and starred in an H1N1 Public Service Announcement for the White House, and were chosen by the President to retest the Archimedes legend using 500 schoolchildren as surrogate soldiers.

They appeared as themselves in the movie Darwin Awards and have made several cameos on other TV shows, including CSI.  In 2010, Hyneman and Savage received the Outstanding Lifetime Achievement Award in Cultural Humanism from the Harvard Secular Society.

About Jamie Hyneman and Adam Savage:

Jamie Hyneman is the owner of M5 Industries, an effects company specializing in problematic custom builds. Besides serving as headquarters of “MythBusters,” M5 continues to work on various research & development projects for private clients.

After trying his hand at careers as various as librarian at the United Nations in Geneva to running a diving and sailing charter business in the Caribbean, Hyneman began his career in show business as special effects shop assistant in New York and later in San Francisco as a crew member on films including “Robocop,” “Arachnophobia” and “Naked Lunch.”

While managing Colossal Pictures’ model shop in San Francisco, Hyneman was given the opportunity to take over – and M5 Industries was born.

Hyneman graduated from Indiana University with a degree in Russian. He has received an honorary engineering degree from the University of Maine as well as an honorary doctorate of engineering from Villanova University, with whom he has an ongoing collaborative relationship to help develop new safety concepts for the military. He is the holder of several patents and the winner of numerous industry awards.

Hyneman currently resides in the San Francisco Bay Area with his wife.

Adam Savage joined M5 in 2002 after receiving a call from former boss Jamie Hyneman to participate in a TV pilot, which turned into the wildly popular Discovery Channel series “MythBusters.”

Savage immersed himself in the NYC arts scene before moving to San Francisco in 1990 to parlay his skills into the thriving theater scene. There he worked for dozens of companies as set designer, prop master, art director and producer before falling into the machine art community where he learned welding, pneumatics, hydraulics, electronics and robot-building.

After exhibiting his work in over 50 art shows nationwide, Savage caught the eye of the special effects industry and began working as a prop builder and art director for major commercials for Sega, Coca-Cola, Nike, Burger King and Chevrolet. His work on a Coca-Cola commercial earned him a Clio Award nomination.

After an 18-month stint as head of research & development for startup toy company ZOOB, Savage joined George Lucas’ Industrial Light and Magic, where he worked on “Star Wars: Episodes 1 and 2,” “Galaxy Quest,” “Space Cowboys,” “A.I.,” “Terminator 3,” “The Mummy,” and dozens of commercials. During this time he also worked as model-shop supervisor for the two “Matrix” sequels as well as taught at the Academy of Art College in San Francisco.

Savage continues to dabble in his multiple hobbies, including passionately restoring his vintage four-wheel drive vehicle and accruing new pieces for his movie prop collection. He currently lives in San Francisco with his wife, twin boys and two dogs.

Tickets are $35 –  $65; all ticket prices include a $3 per ticket restoration charge and are subject to change without notice.

Tickets are available online at www.ppacri.org

or at the PPAC Box Office (220 Weybosset Street in downtown Providence) Monday-Friday 10A – 5P, Saturday 10A – 2P,  and through curtain time(s) on performance days.

Win it: One winner will receive a 2 pack to see MythBusters on Tour at the PPAC on 12/15 at 7 pm. For this giveaway, simply leave me a comment and tell me what you like best about MythBusters. For an additional +2 entries, tweet about this giveaway mentioning @dentistmel and @PPACRI along with this giveaway. Giveaway ends 12/5 and winner will be chosen by random.org. GL!

Helping to Protect Your Family from the Flu! #MC
DreamTone is the next generation in dark spot correction! #DreamTone #bareselfie