Did someone say Disney Fairies? I believe Hayley owns the complete figurine set at home, and if she was not planning to be Snow White for Halloween, her next choice was Tinker Bell. That is why we were all excited when we heard Disney is releasing its first Fairies movie in over two years titled Secret of Wings. 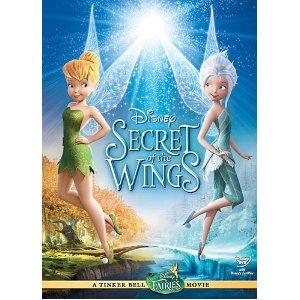 Join Tinker Bell and friends on their new adventure into the never-before-seen mysterious Winter Woods, where Tinker Bell finds out that she has a sister and discovers incredible secrets that will change her life forever. For Tinker Bell and the other warm fairies, the Winter Woods remain a mysterious and forbidden place. “Secret of the Wings” takes audiences on an amazing journey of discovery with Tink, into this forbidden world where she discovers a magical secret that changes her life forever.

“Secret of Wings” is Disney’s highly-anticipated all-new movie in the Tinker Bell Disney Fairies film franchise. These beautifully animated films have ranked at the top of the home entertainment charts every year they have been released.

In addition to the all-new feature film,, the spectacular animated release includes a host of exciting bonus features that extend the viewing experience, taking audiences deeper into the magical world of Disney Fairies.

Hayley absolutely love this DVD, as did her mommy.  She was so excited to see Tinker Bell in action in Secret of Wings.  The plot was very interesting and shows that things really happen in the magic of the Disney Fairy World. It was really awesome how they created two separate world- Pixie Hollow and Winter Woods in the same DVD, that were both equally visually stunning. Periwinkle was the cutest fairy and we really enjoyed seeing her as an addition in this movie. I also loved the bonding relationship between the sisters, as it reminds me of my relationship with my sister.  It is a truly MAGICAL movie!

The Secret of Wings will be available on DVD 10.23 and you can pick up an pre-ordered copy on Amazon today! Check out this adorable clip of the Fairies today to learn more!