The boys of Big Rush and Keke Palmer are bringing their latest smash original Nickelodeon TV movies to DVD. The two hours of musical fun include Big Time Movie where the boys save the world with an awesome Beatles soundtrack as well as the Rags movie, a musical retelling of the classic Cinderella story with a twist. Don’t miss appearances in Rags by loved Nickelodeon starts like Max Schneider (How to Rock), Avan Jogia (Victorious, Spectacular!) and Drake Bell (Drake and Josh). Created by Nickelodeon Home Entertainment and distributed by Paramount Home Media Distribution, Big TIme Movie and Rags: Double Movie just hit shelves on August 28th for the retail price of $14.99. 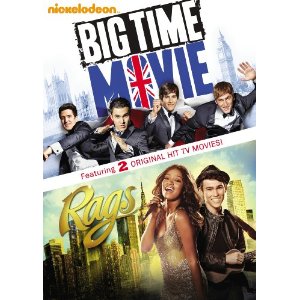 Big Time Movie: In Big Time Movie, Kendall, James, Carlos, and Logan head to London for their first big world tour, but instead get mixed up in a mission to save the world. With their bags switched at the airport, they inadvertently gain possession of a fearsome device that, in the wrong hands, could destroy the world.

Rags: What would happen if Cinderella were a guy instead of a girl? Rags introduces us to Charlie, a super-talented singer songwriter who can’t seem to catch a break. He’s an orphan living with his mean stepfather and not so bright stepbrothers and his dream is finally be recognized. Everything changes when he meets Kadee, the amazing singer and daughter of a music mogul, who also wants the world to see her true talent.

*I received the above DVD for review purposes from Nickelodeon. All opinions are my own and not swayed by outside sources.