J.L. “Lynn” Singleton, President/CEO of the Providence Performing Arts Center
(PPAC), is pleased to announce that Marie Osmond will perform with the Rhode Island Philharmonic Orchestra at her Christmas concert “A Symphonic Christmas” on Thursday, December 22, 2022 at 7:30P. Navigant Credit Union is the sponsor of “A Symphonic Christmas.” 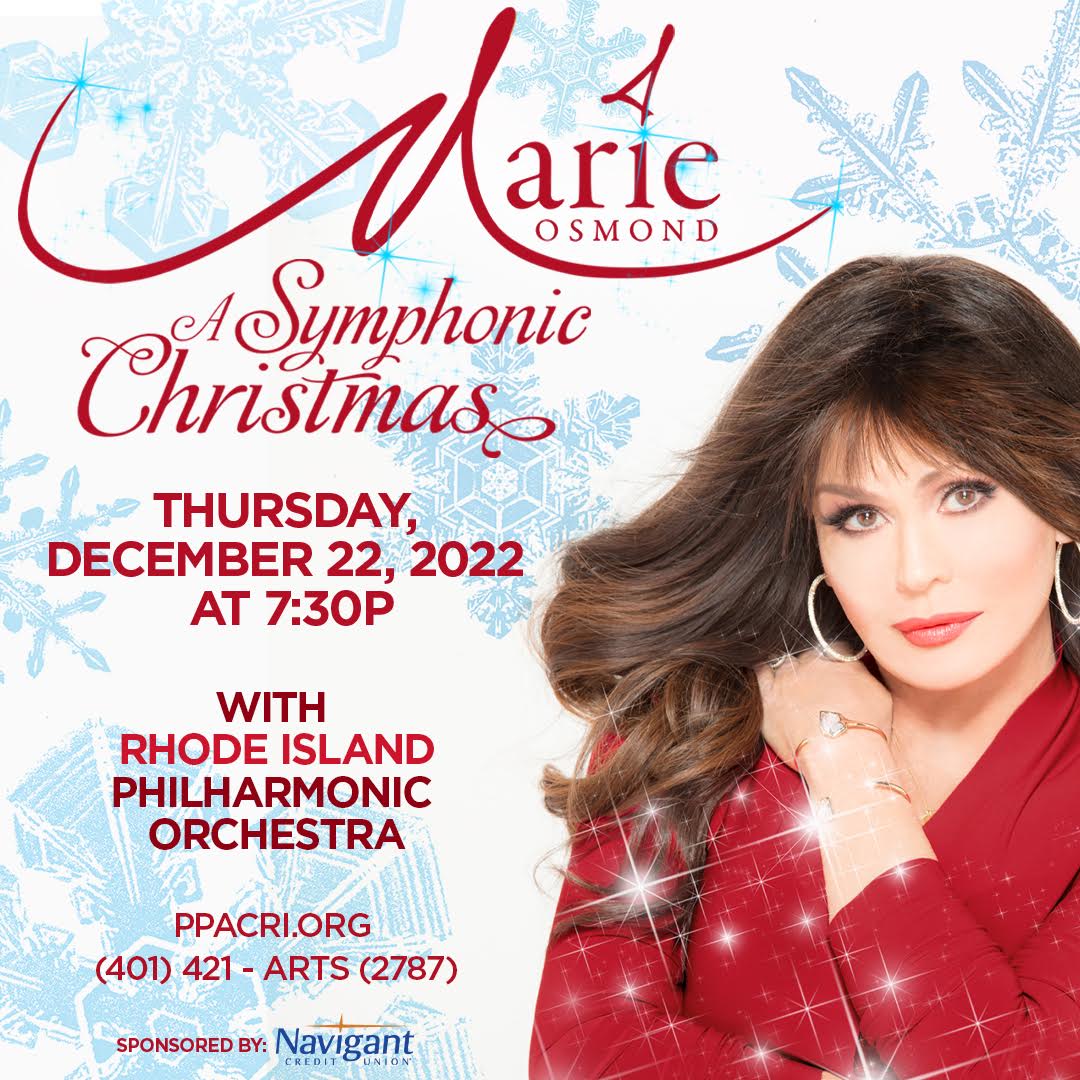 “I am thrilled to be performing my Christmas concert ‘A Symphonic Christmas’ at the majestic Providence Performing Arts Center and to be joined on stage with the renowned Rhode Island Philharmonic Orchestra,” said Marie Osmond. “The Christmas season has always been one of my favorite times of the year. We need a little Christmas right now, more than ever! I am so looking forward to celebrating this magical time in Providence on December 22nd.”

Tickets are on sale now at the PPAC Box Office (220 Weybosset Street in downtown Providence), online at ppacri.org and by phone at 401.421.ARTS (2787). Box office window and phone hours are Monday through Thursday: 10A – 5P, Saturday: 10A – 2P and two hours prior to curtain time(s) on show days. Tickets are $149.50 – $39.50; all ticket prices include a $4 per ticket restoration charge and are subject to change without notice. Fans can look forward to the multiple gold and platinum-selling artist and Country Music Award winner performing festive favorites as well as Billboard chart-topping singles from her iconic six-decade career.

Fans can look forward to the multiple gold and platinum-selling artist and Country Music Award winner performing festive favorites as well as Billboard chart-topping singles from her iconic six-decade career. Marie Osmond has spent over six decades in the entertainment business, performing as a successful singer, television performer and talk show host, dancer, actor, author, entrepreneur, and public speaker. She has continued to maintain relevance, remaining an instantly recognizable figure across the globe. Her debut single “Paper Roses” reached the #1 spot on two Billboard charts, a feat that not only placed her among an elite class of musical royalty, but instantly catapulted her into international superstardom. She is a multiple gold and platinum selling artist and CMA winner, garnering numerous Billboard charttopping singles and albums, and three New York Times Bestselling books. She has entertained millions throughout the world via television, radio, film, literature, live concerts, and Broadway performances.As a philanthropist, she cofounded Children’s Miracle Network Hospitals, which has raised over 8 billion dollars for children to date. In 2018, Marie was awarded “The Secretary of Defense Medal for Outstanding Public Service” by four-Star General Robert B. Brown, U.S. Army Pacific (representing Secretary of Defense James Mattis), during her birthday concert in Honolulu, Hawaii.

In 2019 the Hollywood Beauty Awards gave Marie the “Timeless Beauty Award” which is an honor bestowed upon a public figure that has maintained their grace and remained a positive influence and role model to their fans throughout their career. In August of 2019, Marie and brother Donny received the Key to the Las Vegas Strip and in October 2019 they cemented their legacy with a star on the Las Vegas Walk of Stars. Marie was previously a co-host on the award-winning daytime show “The Talk.” Since Marie and Donny ended their 11-year residency at the Flamingo in November 2019, she travels the U.S. with her sell-out Symphonic shows. Her performances receive rave reviews. She has also starred in three Lifetime Christmas movies: “The Road Home for Christmas” (2019), “The Christmas Edition” (2020) and most recently “A Fiancé For Christmas” (2021).

Marie’s Top 10 Billboard Country Chart album, “Music is Medicine,” has been the perfect set up for her recently released “Unexpected” studio album which pushed her voice to remarkable heights and debuted #1 on Billboard’s Classical Crossover Albums Chart following its December 2021 release. It spent 24 weeks in the Top 10, having re-entered and re-entered the charts – Marie appropriately named the album because it was such an ‘unexpected’ surprise for her. She says she did it for the fans who allowed her to reach this high. “Unexpected” is also dedicated to her father who encouraged Marie to follow her passion and sing every style of music she loved. Marie continues to perform and raise money for children’s hospitals, research, and awareness. She has influenced countless audiences and benefited an innumerable amount of lives worldwide.

WIN IT: One winner will receive a 4 pack to this show. To enter this giveaway, simply leave me a comment to tell me who you want to bring with you. This giveaway ends Sunday December 11 at 8 PM. Good luck! Winner chosen by random.org.

*I worked with the PPAC, RI on this. All opinions are my own and not swayed by outside sources.*