I recently watched a documentary called In The Dark of The Valley . As a mom, I was very interested in watching this documentary as it told what happened in the Santa Susana Field Lab which was a testing site for radioactive substances. This field was located only 7 miles from rural American Southern CA.

Synopsis:                                      A Southern California mother discovers that the Santa Susana Field Lab, the site of one of the largest nuclear accidents in U.S. history, is located only 7 miles from her home. Concealed from the public eye for 20 years and never fully cleaned up, she grapples with the idea that the site may be responsible for exposing her daughter and community to cancer-causing radioactive waste. 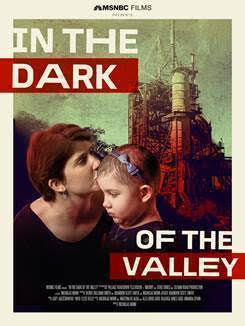 Throughout the documentary, it told how the valley was the ideal place to go for young families and one of the most idyllic place for raising kids.  The families in this doc loved the location and loved how beautiful the town they lived in was. However, what was not told to them is how they placed a radioactive lab testing site only 7 miles from them. Unfortunately there was a huge radioactive disaster with chemicals released into the air on July 15, 1959. This nuclear accident was never released fully to the public with the hopes that nothing would be found about this. However, this was not the case.

What came next is they recently found out a lot of these children got diagnosed with childhood cancers such as neuroblastomas and leukemia.  The city took initiative to obtain safe living and with contaminated waste, they do not feel safe. NASA claimed that they have to look at different ways to clean up the waste but the parents don’t believe so. They need to do a full cleanup and not walk away from contamination.  Over the last few years, NASA was trying to look at ways to do clean up.

The lead fighter, Melissa, whose daughter was diagnosed with pediatric cancer, gathers many families who live near this radioactive site to fight in a decade long argument to have the site cleaned up. This is not talked about a lot but is very real situation mixed in with govermenal lies and negligence on one party’s part.

This is a very telling documentary and one that should be watched by all!
Tweet
Share
Pin
0 Shares
Let’s Take a Tour of the Polynesian Village, Contemporary, and Wilderness Lodge at Walt Disney World
MAX CBD Wellness products!