I will fully admit there are just so many days lately that I have felt sad. With the unknowing of the future and the demise of this virus, I need things to keep me happy to stay afloat. One such activity I like to is watch movies. Recently I watched Lilly’s Light: The Movie and it brought such joy, hope, and happiness to my family.

The story starts out telling about a young girl named Lilly who lost her parents at a young age to an accident on the water. Due to this, she becomes a foster mom and we are introduced to her family while she tends to a very special lighthouse.

While the acting is simply adorable, I was a big fan of the original music throughout this movie. The music brings inspiring messages such as “Shine the Light” which talks about the challenges facing foster children.  The music is by Oscar nominated and Emmy, Grammy, Tony Award winning singer/songwriter Kenny Loggins and Songwriter Hall of Fame inductee Steve Dorff.

The life messages capture the heart of both the youth and adult ages. It is the ideal family movie to bring joy but also showcasing what is really important at life. It also showcases more about being a foster child through song as well. The film star and producer, Sherry Hursey, hopes that people will open their hearts to fostering and the importance of doing this. The film’s live and subsequent virtual theatrical screenings will serve to raise awareness and funding for Lilly’s Fostering Hearts, a 501 (c)(3) charity that raises awareness as to the needs of displaced, fostered, and adoptable youth as well as Foster Care Counts and The Dave Thomas Foundation for Adoption.

“Lilly’s Light: The Movie” Synopsis Lilly is a loving foster mom and the keeper of an enchanted lighthouse. With her spirited crew of kids, their exotic talking pets and zany friends, Lilly uses joy, love, laughter and song as her tools, and shows everyone that “Life is Full of Possibilities!” The adventure begins when two curious members of Lilly’s crew discover the Big Book of Little Adventures in the lighthouse basement. Messenger-pelican, Pel Mel, brings news that newly orphaned Daniel and his pot-bellied pig, Oink, need a home. As sisters Peaches, (Mindy Sterling) and Dee, (Philece Sampler) snicker-bicker, Professor Crabbe, perfects the Illiator. Will and Al Patchitt prepare for guests, while Lilly, the kids and Uncle Fitz take Daniel on a musical journey where they meet Sir Oinks A Lot, the Wizard of Hog (Fred Willard). He discovers the secret of the lighthouse and how to turn the imaginary into magical adventure. As the adventure ends, our story returns us to present day in the lighthouse basement, several years later. We are reunited with slightly older yet familiar faces, introduced to a few new crew members, including cousin Kenny Patchitt (Rick Cowling), and the next chapter begins with a new spark of light. Lilly’s Light is filled with original music, sparkling sets and strong message points to which children can relate. It “shines a light” on the issue of challenges facing foster children. It is an inspiring and uplifting adventure that will capture the hearts and minds of children and adults everywhere. 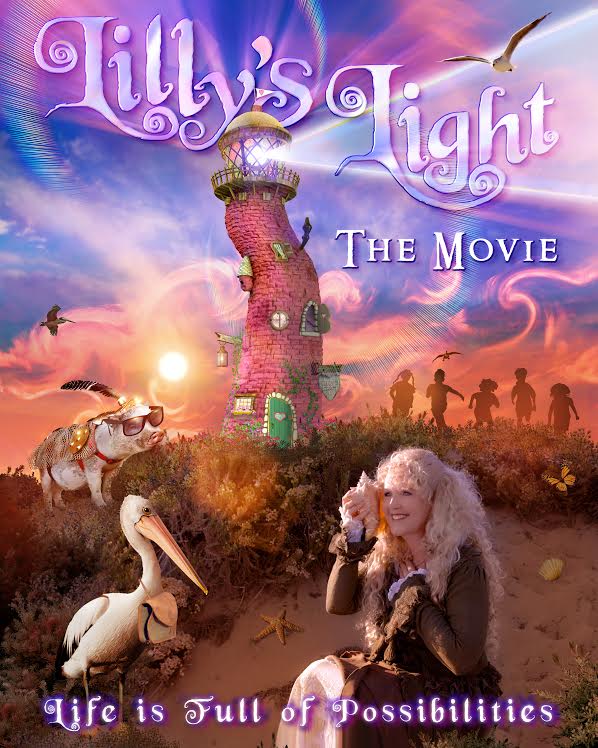 “Lilly’s Light: The Movie” is based on the original TV program “Lilly’s Light,” that premiered on PBS stations in 2010 and won a KIDS FIRST! Best Award by The Coalition For Quality Children’s Media.

Dr. Gordon’s statement:
Lilly’s Light: The Movie is a film designed to advance pro-social and imaginative behaviors in early school-age children through developmentally appropriate life-lessons. This musical is designed to entertain, inform, and enlighten children in the six to eleven year old age ranges. It is also a concept that attempts to challenge primary grade boys and girls to get actively involved in the beauty of the language arts, throughrich story telling and adventure that is rooted in imaginative play, humor, music, and dance. I believe that Lilly’s Light has an educational curriculum that is based on concepts that will assist a child in his or her social and emotional development (affective areas), as well as with those self-esteem and personal concepts that will assist them in their reading, writing, math and social studies (cognitive areas).
”Dr. Gordon L. Berry –Education ConsultantProfessor Emeritus
Graduate School of Education and Information Studies, UCLA

Lilly’s Light, The Movie is available to watch at GATHR at HOME. This is a musical adventure that your whole family will LOVE!