This year, has been the year of the Grinch! We love the Grinch in our household. We saw the live Boch Grinch Broadway type show this year and I even got my first Grinch sweater. Now just in time for the coldness of the winter, Universal Pictures Home Entertainment Dr. Seuss’ The Grinch is available on DVD starting this Tuesday! Wahoo! 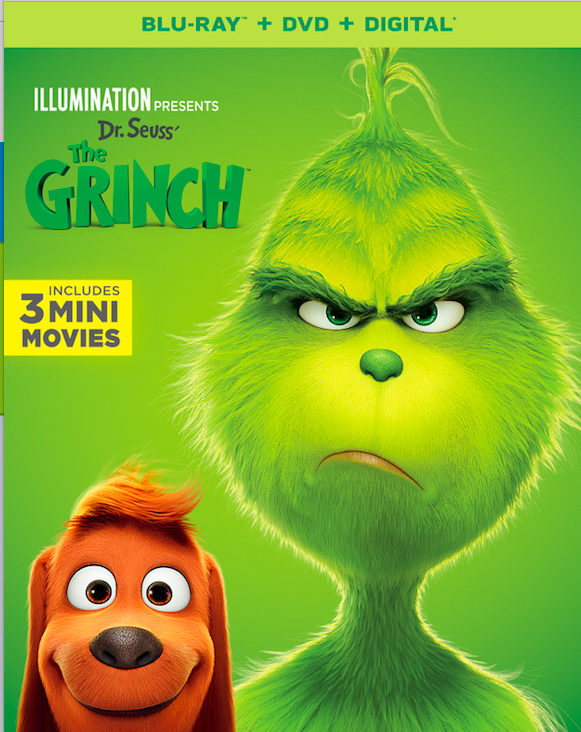 ABOUT DR. SEUSS’ THE GRINCH:

The new home entertainment edition contains more than 60 minutes of bonus content, including three mini-movies: “Dog Days of Winter” starring the Grinch and his heroically loyal dog Max; and “Yellow is the New Black” and “Santa’s Little Helpers,” both starring the lovable Minions. It also includes stunning featurettes, a how-to-draw tutorial and much more. Narrated by Grammy Award®winner and Oscar® nominee Pharrell Williams, Dr. Seuss’ The Grinch stars Academy Award® nominee Benedict Cumberbatch (Dr. Strange, “Sherlock”) as the infamous Grinch, who lives a solitary life inside a cave on Mt. Crumpit with only his loyal dog, Max, for company. The incredible voice cast includes Rashida Jones (“Parks and Recreation,” The Muppets) as Donna Who, Kenan Thompson (“Saturday Night Live”) as Bricklebaum, Cameron Seely (The Greatest Showman) as Cindy-Lou Who, and featuring legendary actress Angela Lansbury (Anastasia, Beauty and the Beast) as the mayor of Whoville. Funny, heartwarming and visually stunning, Dr. Seuss’ The Grinch is a perfect night in for the whole family!

The film will be available on 4K Ultra HD in a combo pack which includes 4K Ultra HD Blu-rayTM, Blu-rayTM and Digital. The 4K Ultra HD disc will include the same bonus features as the Blu-rayTM version, all in stunning 4K resolution.

Be sure to pick up this wonderful movie on DVD on February 5th! Also available now for streaming.

Giveaway: One winner will receive a digital code for the Grinch. This giveaway is run via rafflecopter so click read more to see the actual giveaway. The only mandatory entry is to tell me who you want to win this for in the comment section proceeding this post.  While the other entries are optional, I highly suggest filling them out to increase your chances of winning. US only. Good luck!
a Rafflecopter giveaway

*I worked with Universal to promote this. All opinions are my own and not swayed by outside sources.*

Blaire Wilson Available now at the American Girl Doll Store + the Girl of the Year Review+ Giveaway!
Shopping at The Justice Clothing Store!