Last year at the Disney SMMC conference, we learned all about the all new Muppet Babies onboard the Disney Dream! I knew being a child of the Muppet’s era, this was one show I wanted to introduce my kids to. As a mom of three young children, I can recreate my childhood with an all new Muppet series. Well that series Muppet Babies: Time to Play! is now available on DVD and is simply amazing! Taylor is glued to this series! 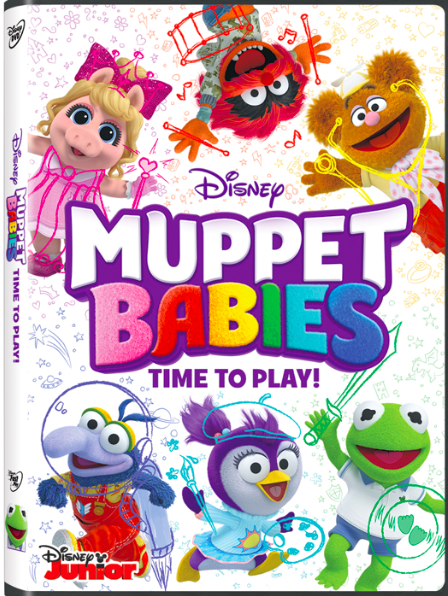 Synopsis:     Almost 30 years after the Muppet Babies first won the hearts of kids and families around the world, Disney Junior’s reimagined “Muppet Babies” chronicles the hilarious playroom antics of a young Kermit the Frog, Piggy, Fozzie Bear, Gonzo and Animal – plus a brand-new Muppet Baby, Summer Penguin. Under the watchful eye of Miss Nanny, the Muppet Babies use their imaginations to embark on countless adventures that take them to the farthest corners of the universe and demonstrate to young viewers the power and potential of imaginative play.

How Kermit Got His Groove/One Small Problem

Kermit and Piggy’s Show and Tell

Kermit and Fozzie’s Show and Tell

Piggy and Gonzo’s Show and Tell

“What’s So Scary About The Dark?”

“Never Have To Say Goodbye (To The Summer)”

“Get Back In The Game”

“Good Things Come To Those Who Wait”

“You Can Be A Dancer”

Trust me when I tell you, you will want to pick up Muppet Babies: Time To Play!  on Tuesday August 14th! Relieve your childhood with the Muppet Babies!

*Disney provided me a copy of this DVD. All opinions are my own and not swayed by outside sources.*

American SanaExpert- The Prenatal of Choice!
Life of a Party now available on DVD!