*My interview with Peyton Reed was part of the Ant-Man and The Wasp On-set press trip to Atlanta. All opinions are my own and not swayed by outside sources.*

At the Ant-Man and The Wasp event, we had the chance to interview Peyton Reed. You can tell him passion when it comes to this movie and he told us a lot about this upcoming movie!

We started the interview with Peyton Reed and he told us why he decided to go in the direction he did with Ant-Man and The Wasp.

“I wanted to be both bigger and get out in the world more, but also be even more intimate and delve into family stuff even more. That is the big strength of Ant Man, within the Marvel Cinematic Universe. I always liked that, Scott Lang is just a normal guy who’s made bad decisions in his life, and he keeps trying to make the right decision. And he keeps having these setbacks.

But he is not someone who naturally has super powers. That’s all about the suit! And, at the end of the last movie, Hope Van Dime was very much a character in the first movie, but she hadn’t become a superhero in a suit yet. That obviously was the most exciting thing in the beginning of this. It’s like, we get to finally see Wasp in action, and also see them as a partnership.” 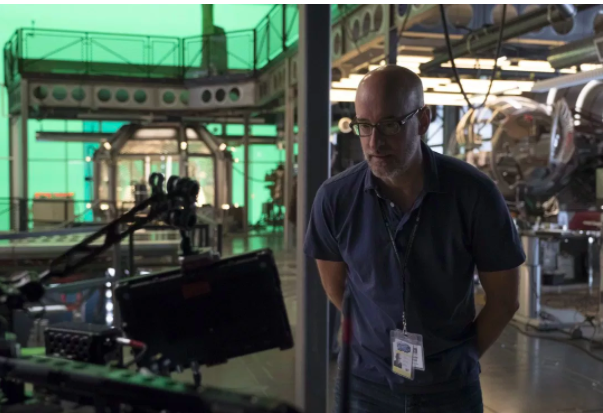 He told us in this movie he wanted to get out and feel San Francisco and put the two characters in the real world. He also told us in Captain America Civil War, Scott Lang is in that movie a bit but an important bit.

“Ant Man and Wasp are the protectors of this Pym technology, and then he’s gone off and exposed it to, Tony Stark who is his worst nightmare. So, I liked the idea that that could give us a really clear jumping off point in terms of what that did to Scott and Hank’s relationship, and also Scott and Hope’s relationship. BeCause the movie’s absolutely about Hope and Scott attacking, being heroes in very different ways.

And then also the notion of… will they or won’t they be successful as a duo. Which is a kind of different thing, in the MCU. I guess you have Captain America and Falcon as a partnership. But this is a very different partnership. We decided to call the movie Ant Man and Wasp because it’s very much about both of them. And it’s very important to represent both of their points of views equally in this movie. And that was really, really fun, because it’s part search and rescue movie.”

He told us it is a sort of family movie between parents and their children.

We talked a lot about Cassie and her role in the movie. He told us that there’s a scene in the movie where Scott and Cassie have a real heart to heart discussion about what’s going on in their lives.

“And and about his struggle. Part of Scott’s thing is, he’s on house arrest at the beginning of the movie. But part of it is really a work life balance issue. Because all these other people are full time heroes. But his goal was really just, I want to do this so I can be a part of my daughter’s life.

But then what happens in Civil War kind of puts him back in a tough position again. And that’s his big dilemma is just, again, wanting to be there as a dad, and Cassie having a slightly different point of view on things, once she kind of starts to become aware of what’s going on with her dad.” 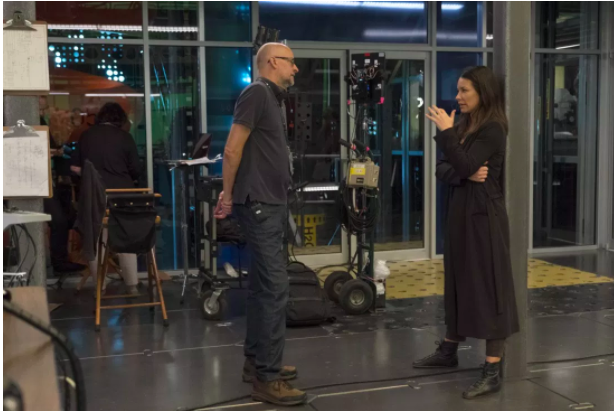 “In the comics, Ghost started out as an Iron Man villain, and was a man. And I very much wanted a female antagonist. And it gave us also a chance to sort of play with that thematic that I was talking about. About, parents and their kids. And sort of create an antagonist. Yeah, I stop shy of calling her a villain, though she is the villain. An antagonist who you really see the root of what happened to this woman which was a girl, and how it’s informed the rest of her life, and her own dilemma.

She has a very strong point of view. And I think the audience is really going to relate to her as well. It’s a very complicated set of dynamics that I’m not at liberty to discuss in detail. But it was important to do something that wasn’t just a sort of arch villain.” 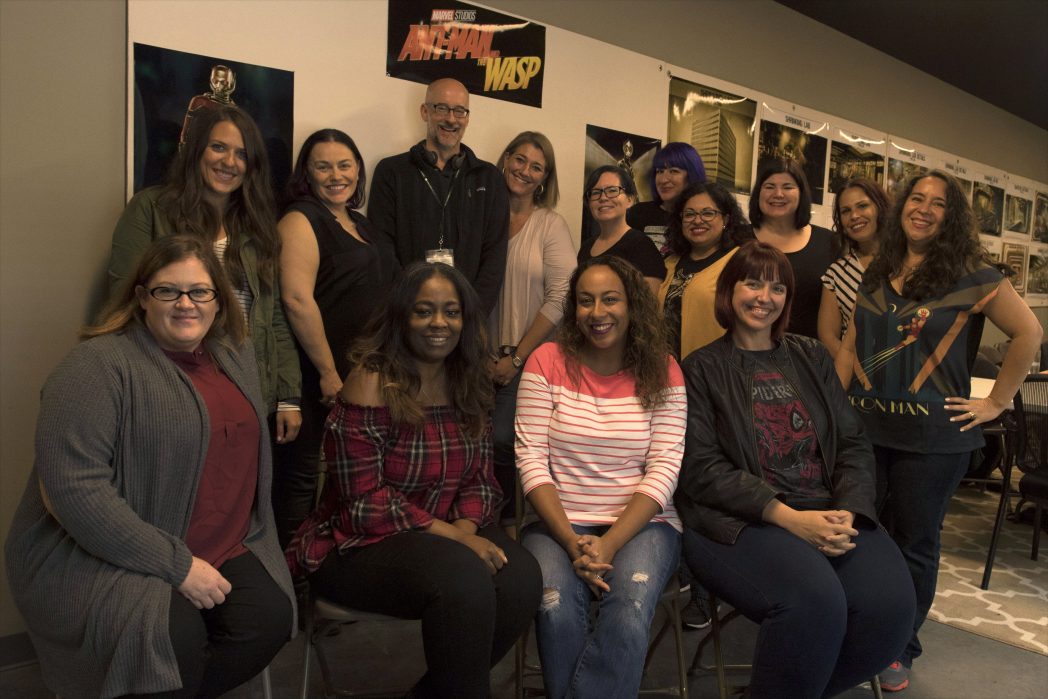 He then talked to us about where they filmed and why they decided to use in studio sets for some.

“So, we just thought it would be fun to not only play with scale and size with our lead characters, but also with some of the environments. So the audience is constantly sort of guessing where they are and what’s happening. What size they are. And the idea came up of this shrinking horrible lab. Because at the beginning of our movie, Hank and Hope find themselves on the move. And the idea came about, what if they had this giant building. But in terms of shooting it, there’s so many of these movies now that create all digital environments, and they do it extremely well.”

“But for me I really wanted it to be a tactile thing because I think that you get so much in terms of the actors reacting to something real. And you build it, obviously, to shoot it. But you still have physical limitations that the camera has to move around. The actors have to navigate around. I think maybe the biggest set that’s ever been built for a Marvel movie.” 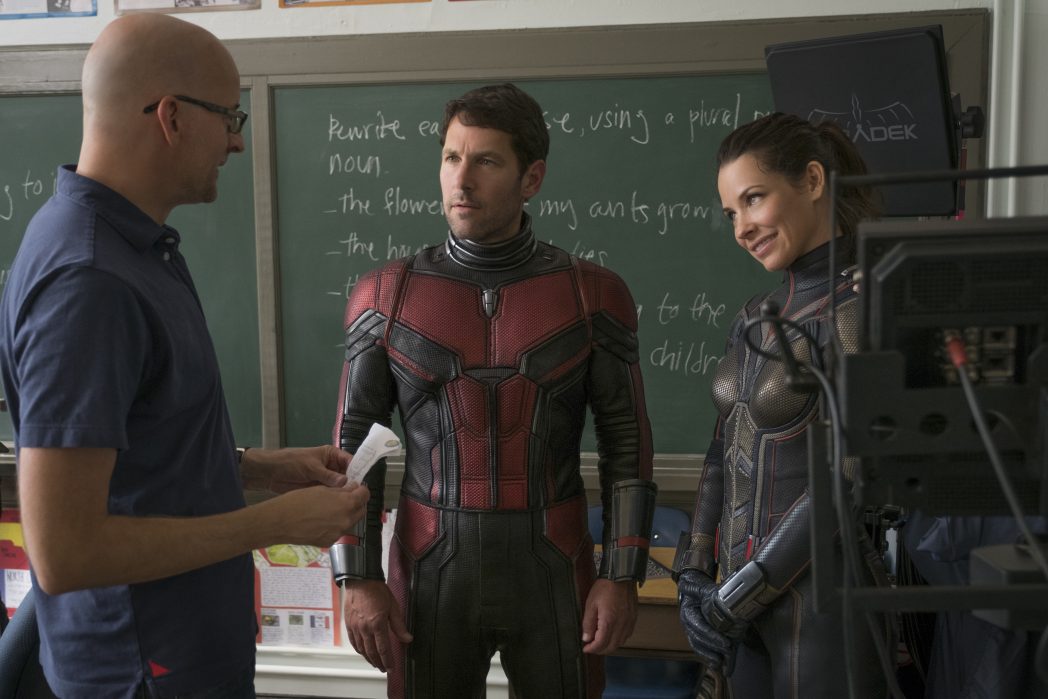 “I can certainly direct them to do that. But it’s so much easier for them if they can physically see these things, and react to this space. And also I like the idea of these types of hero movies. My personal aesthetic is that they take place in a version of the real world, and that the heroes and the powers are the bizarre things. It’s certainly a lot of whimsy in the design of that lab. That you use to hold cables, or there’s like a giant clothes pin. He’s taking these found objects and using them.”

Why Parents Should Buy an All-in-One Car Seat from DIONO?!
StickerYou Custom Stickers, Labels, and More