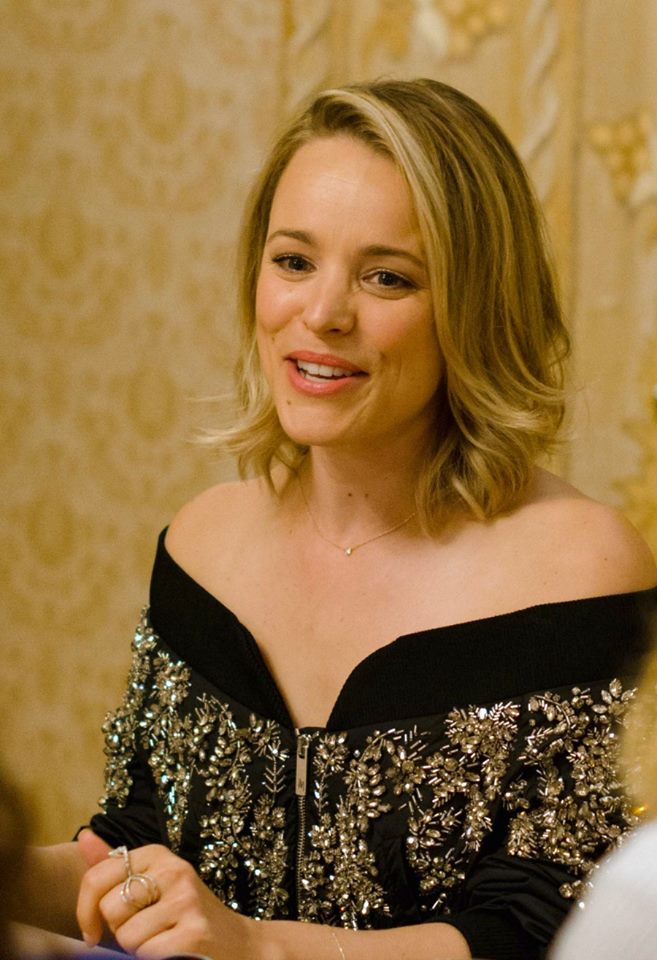 It is not everyday you get to interview world celebrity actress Rachel McAdams. I have been a HUGE fan of her ever since I could remember. Some of my favorite roles of hers include Spotlight, The Time Traveler’s Wife,  Mean Girls, and obviously The Notebook. Ever since I saw Mean Girls, I knew Rachel McAdams was an actress after my own heart. Now Rachel McAdams can be see in in Doctor Strange (out Friday November 4th) and she has the stellar role of playing Christine Palmer. 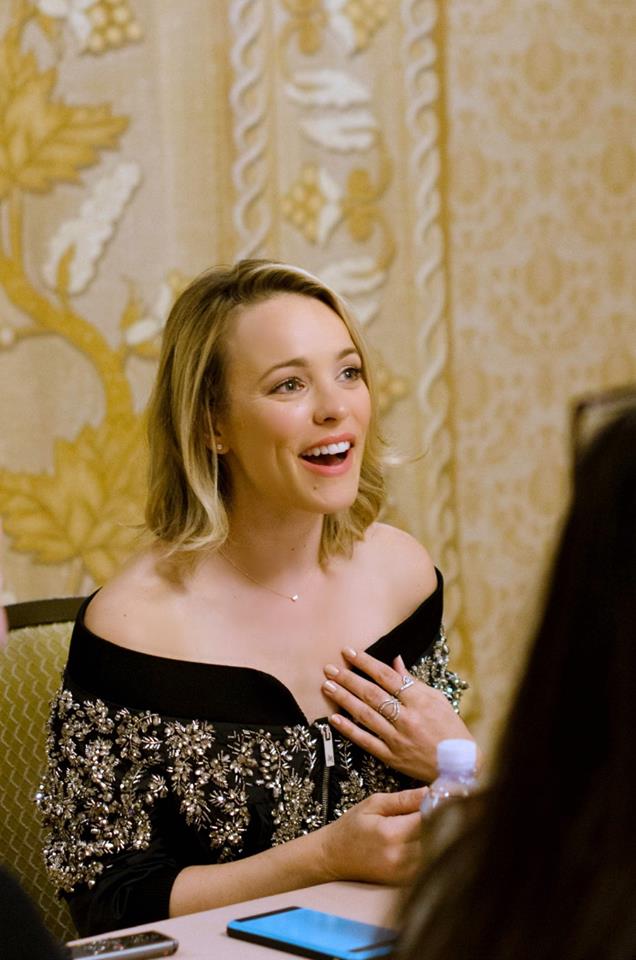 Christine Palmer plays the role of fellow surgeon and colleague to Doctor Strange (Benedict Cumberbatch) and they have an involved relationship. She is a strong force in Doctor Strange and she plays the character role perfectly.

When Rachel McAdams walked in the room I put away my school girl giddiness and just had a huge smile on my face. The very first thing I noticed is she is GORGEOUS. I always thought of her as a very cute actress but she is breathtaking. After we all remarked how we loved her top and after the applause for her was done, it was time to interview her!  I hope you enjoy my interview with her as much as I did!

My Interview with Rachel McAdams:

1.   How is it joining the Marvel universe?

” It was everything I had hoped for and more really. I assumed I would be working with you know the crème de la crème really and I was. So it was just great to be in such great hands. And you know just from costumes and such, everything was just so well done, so beautifully thought through and well-crafted.

They didn’t even make me pretend that much with green screen. I mean that’s how considerate they were.  They had real things on fishing wires to actually try and scare me. And so it was, they are very thoughtful people.”

She said she saw an early cut of the film and at the time the effects were about halfway done but they were mind blowing! We told her we saw it last night and she is right! The special effects were AMAZING! It was so great and trippy!

3.   Were you a Marvel fan prior to doing the role? 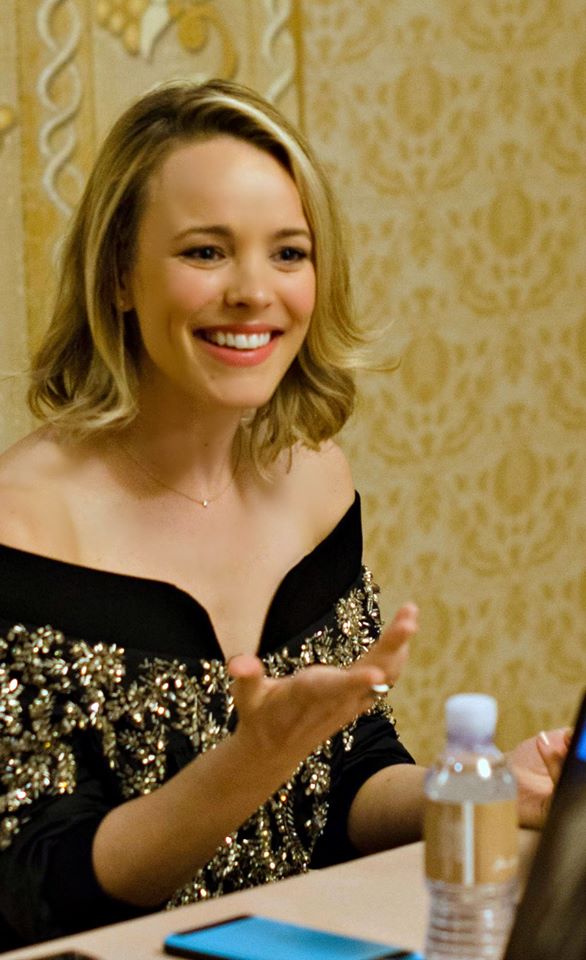 ” I hadn’t read the Dr. Strange comics growing up. I was kind of reading you know Judy Blume and stuff like that. But I’ve since educated myself. And I think they’re the Dr. Strange ones are so different from the other comic books which is nice. I love the movies but I hadn’t read a lot of the comics.”

4.  What did you have to do to prepare for your role? You’re playing a doctor. Did you do some research there or was there anything specific you did?

She told us she is a little funny when it comes to blood and guts. She told us her mom was a nurse so she grew up around medicine. She joked that is why she probably became an actress. She had the chance to shadow amazing brain surgeons including a female brain surgeon in Toronto and another one in London. Everyday on set there was a surgeon available. They told her how to do sutures with practicing on raw turkey breasts. She also raved about a book called No Harm who is a world famous brain surgeon. After hearing her rave, I need to pick up this book about being your own advocate when it comes to your health. 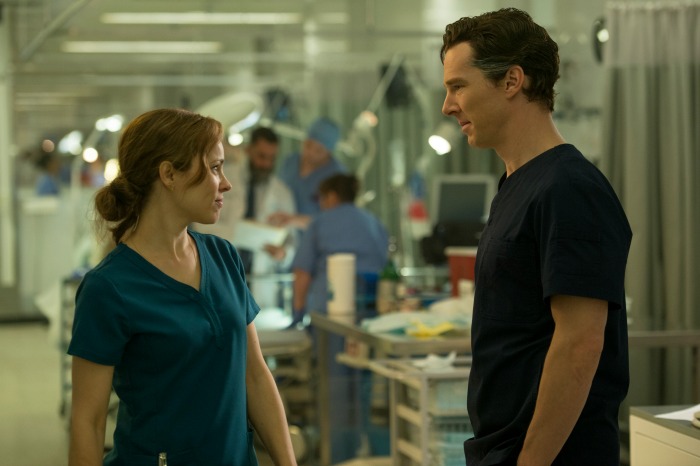 5.   Onset, what was it like to be in scrubs with everyone else all in superhero stuff?

She told us she loved it and felt very comfortable. She told us she got to wear orthopedic running shoes every day which she was grateful for. She was a bit jealous about not wearing the levitation cloak but she was so happy to be comfortable.

6.    How do you prepare to get genuinely startled?

She told us she hoped to get it on the first try because after that it gets a bit fake. In real life she gets very scared so it was not a far stretch to get startled.

7.  Your character is so intensely emotional in the film. Is there a special memory or place, how do you draw on that emotion for the character?

“I mean I do think having a mother as a nurse who’s very compassionate and had to sometimes take her work home with her, helped.  I  grew up with that a little bit and have great admiration for people who do that for a living and who are real empathetic.  So I suppose I drew on that from my mom a bit.”

“And you know she would miss, she did IV therapy. If she would miss someone’s vein I mean, she would beat herself up so bad. So  yeah, I guess it was a little bit personal that way. But also you know Benedict is such an extraordinary actor that you just have to be present with him and it all kind of falls into place. I mean, we did a lot of crying together. We cried one day for eight hours straight, every single take.”

“And I’ve never been able to do that before. You know it comes, it goes, it comes back again. But with him,  he’s so emotionally available and present that I’d look at him and I’d start crying. You know it was just like water works all day long. We both had these incredible headaches at the end of the day. And I was like well we’re dehydrated now.  I really have to give kudos to him for that.”

8.  How did you go about getting this role? And when you found out that you got it what was your reaction?

9. Was there a scene or maybe scenes during filming where you had to work just all by yourself? And is it hard for you to be in this environment surrounded by green, blue screens?

“That’s a good question. I wasn’t alone very much. I wasn’t alone as much as I thought it would be. They had a dummy because there were times when Benedict had to be on wires but then they also needed  his body on the table as well.”

10.    So we know that this movie won’t be the end of Dr. strange, how do you feel about being further involved in the Marvel cinematic universe? And what would you like to see your character do if you had your choice?

”  Oh, I want my own cloak:) I haven’t really thought about it because it is really to be  determined. I think the success of the film determines that.  So I mean I loved being a part of it and I  would be more than happy to go forward with it. But you know, who knows.”

” I don’t have any superpowers. I just don’t.  I mean I would like to be invisible because I’d love to go into people’s houses and see their interior decorating. Don’t you guys! Like when you’re driving at night and you can kind of see through the window and you think, oh that looks so cozy in there. I wish I could like get a free pass. Yeah, so that’s probably the one I’d pick. I’d be a total creeper:)”

12.     How does it feel for you to come into this knowing that you have a huge fan base that are not Marvel fans? You’re going to be bringing new people to the Marvel universe.  How does that feel for you?

She told us that is  really exciting and then she made a joke about Mean Girls. She said she hopes everyone loves it!  I know they will Rachel!