*I received this DVD. All my opinions are my own and not swayed by outside sources.*

A few months ago, my parents took the kids to see Minions and they loved it. Those yellow Minions have invaded my home in terms of toys, plush dolls, books, and more. That is okay with me because the Minions are just adorable. Now you can buy Minions on DVD, which released this past week! Yah!! 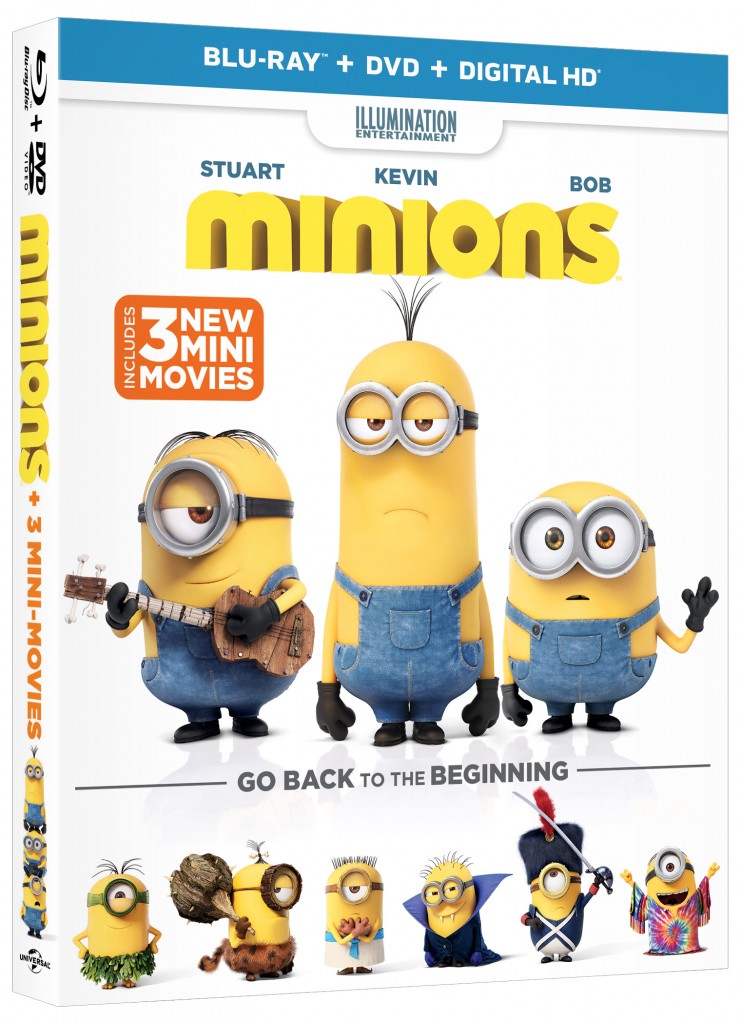 This movie is wicked cute and will visually please the entire family. Be sure to buy it for the holiday season on December 8th! Do not forget or else your kids will probably get mad at you!

BRING HOME THE WORLD’S #1 COMEDY OF THE YEAR FOR THE HOLIDAYS!

“Minions are back and even better!” – Dave Morales, FOX TV
Synopsis: The breakout stars the world fell in love with in Universal Pictures and Illumination Entertainment’s Despicable Me global film franchise headline their own movie for the first time in Minions, available on Digital HD now and on Blu-ray™ Combo Pack, DVD and On Demand on December 8, 2015 from Universal Pictures Home Entertainment. A much anticipated prequel to the unprecedented worldwide blockbusters Despicable Me and the beloved sequel Despicable Me 2, Minions is an immensely entertaining film for all audiences called “inventive and hilarious” by Julian Roman, Movieweb.com. The Blu-ray™ Combo Pack and Digital HD also come with three all-new mini-movies and even more Minions everyone will want to watch again and again especially during the busy holiday travel season.

The story of Universal Pictures and Illumination Entertainment’s Minions begins at the dawn of time. Starting as single-celled yellow organisms, Minions evolve through the ages, perpetually serving the most despicable of masters. Continuously unsuccessful at keeping these masters—from T. rex to Napoleon—the Minions find themselves without someone to serve and fall into a deep depression. But one Minion named Kevin has a plan, and he—alongside teenage rebel Stuart and lovable little Bob—ventures out into the world to find a new evil boss for his brethren to follow. The trio embark upon a thrilling journey that ultimately leads them to their next potential master, Scarlet Overkill (Academy Award®-winner Sandra Bullock), the world’s first-ever female super-villain. They travel from frigid Antarctica to 1960s New York City, ending in ‘mod’ London, where they must face their biggest challenge to date: saving all of Minionkind…from annihilation.

BONUS FEATURES EXCLUSIVE TO Blu-rayTM and Digital hd:
THREE ALL NEW ORIGINAL MINI-MOVIES: Cro Minion, Competition, and Binky Nelson Unpacified
DELETED SCENE – ME, MYSELF AND STUART
AROUND THE WORLD INTERACTIVE MAP – Explore the world of the Minions with this interactive map featuring a collection of games, trivia, featurettes, storyboards, and more all themed to movie locations.
BEHIND THE GOGGLES – THE ILLUMINATION STORY OF THE MINIONS – Get a “behind the googles” look at the history and evolution of everyone’s favorite yellow henchmen.
WRITER – See how the Minions evolve throughout the different time periods. Writer, Brian Lynch discusses creating distinctive personalities for the three main Minions, his VillainCon idea, and the Minion family.
BOSS’ OFFICE – Illumination Entertainment CEO and founder and Minions producer, Chris Meledandri discusses the origins of Illumination Entertainment and the genesis of both Despicable Me and the Minions.
ART DEPARTMENT – See how the Minions came to life, from the original art concept of the henchmen to the final creation of the Minions and how to differentiate them between new time periods. Also, see how the idea of Herb and Scarlett Overkill’s characters came to be.
GALLERY – CONCEPT ART (stills)
GALLERY – COLOR SCRIPT (stills)
COMPOSER – Listen to how composer Heitor Pereira creates the sound of the Minions and what it takes to create big music for small characters.
ACTORS STUDIO – Listen to the actors’ experiences being part of the Minions movie, who their favorite Minions are, and why they love them so much
NOTICE BOARD (stills)
SAFETY VIDEO

ILLUMINATION MACGUFF ANIMATION
ANIMATION – Go behind the scenes and hear about the challenges and excitement behind the Minion characters and bringing them alive through animation in the movie
LIGHTING, LAYOUT AND EFFECTS – A look at the ways in which layout and lighting plays a big role in the emotion and motivation in the movie. Also see the ways in which they try to keep the 60’s vintage look and the challenges they face with very technical shots, where one shot can take weeks.
3D MODELS GALLERY (stills)
DIRECTORS – Directors Pierre Coffin and Kyle Balda discuss the unique challenges of creating distinctive personalities for the Minions
PRODUCERS – Producers Chris Meledandri, Janet Healy and Executive Producer Chris Renaud discuss the three main characters – Kevin, Stuart, and Bob – little family in the movie and the goal of creating a special bond between them and the audience when they leave the theater.
EDITORIAL – Editor Claire Dodgson discusses the distinctive editing style of the Despicable Me franchise and the three-year process it takes to make these movies from the original storyboards to cutting scenes with Minion dialogue.
STORYBOARD ARTIST – Learn how the actions of the words of the script turn into visual drawings and how much work is put in from the rough sketches to the final cut of the movie.
GALLERY – STUART HOT TUB STORYBOARD (stills)
JINGLE BELLS MINION STYLE – This holiday favorite is brought to life in a merry-Minion way. Now you get to sing along to the beloved video that was the most shared piece of content on Facebook in 2014.
THE SECRET LIFE OF PETS THEATRICAL TRAILER

DVD BONUS FEATURES
DELETED SCENE – ME, MYSELF AND STUART

JINGLE BELLS MINION STYLE – This holiday favorite is brought to life in a merry-Minion way. Now you get to sing along to the beloved video that was the most shared piece of content on Facebook in 2014.

Be sure to pick up the DVD on December 8th!