SYNOPSIS: Launch into the adventure of a lifetime with everyone’s favorite monkey in this all-new movie, Curious George 3: Back to the Jungle! When Curious George is asked to take part in a very important space mission, a little monkeying around forces him to crash-land in Africa. While a worried Man with the Yellow Hat searches for him, Curious George bravely explores the jungle and makes new animal friends along the way. Reunited at last, the two best pals have an unforgettable adventure shared with their new friends! Featuring the voice talents of Angela Bassett & John Goodman, with music by the Plain White T’s, join Curious George on his fun-filled journey that the whole family will enjoy! 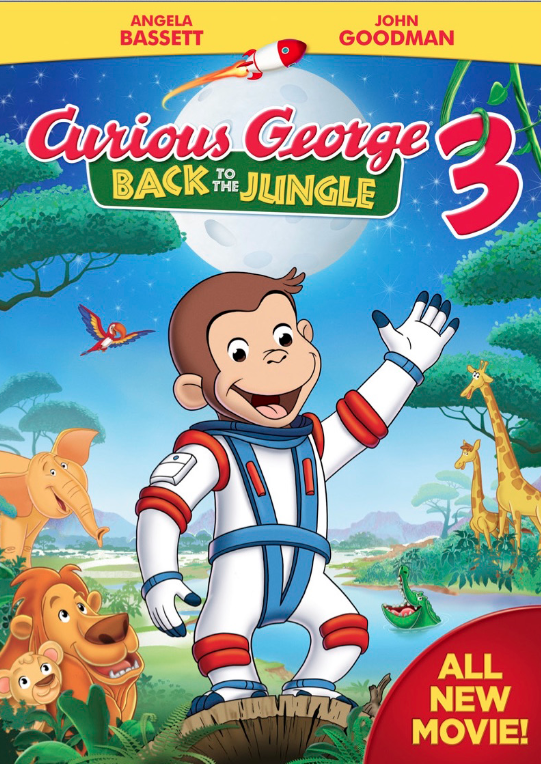 The soundtrack is now available  on Back Lot Music, featuring the new original song “Welcome to Paradise” performed by Plain White T’s and score by composer Heitor Pereira (DESPICABLE ME, MINIONS).

Sing-Alongs – Sing along to your favorite songs from the film

This is the cutest DVD!! For any Curious George fan, be sure to check it out today!!

The Universal 1440 Entertainment banner develops and produces live-action and animated productions directly for distribution in all media worldwide. Since its formation in 2005, the group has assembled an exceptional roster of animated family fare, including the brand-new animated feature-length film  The Little Engine That Could; the Daytime Emmy®–winning Curious George television series on PBS KIDS; and a string of hit Barbie movies, based on the world-renowned Mattel-branded doll. The group also has successfully built upon some of Universal’s highly celebrated live-action franchises, more recently launching the Tony Award®–nominated hit touring stage production Bring It On: The Musical; the epic action-adventure Scorpion King 4: Quest for Power; the adrenaline-fueled actioner Death Race 3: Inferno; and the latest in the terrifying suspense saga Curse of Chucky. Among the projects currently readying for release include and the newest installments of the beloved franchises, Curious George 3: Back To The Jungle, R.L. Stine’s Monsterville: Cabinet of Souls, Tremors 5: Bloodlines and The Land Before Time.