Video games and poor cinema go hand in hand. From the Super Mari Bro’s movie back in 1992, to recent flops such as Max Payne and Silent Hill, games have never been able to make a successful jump to the big screen. As any gamer will tell you the world of gaming is often a fascinating place and these movie’s problems are that they reject that in place of poor movie scripts and special effects. Step forward Wreck it Ralph, the world created by Disney in their latest flick manages to capture the gaming world in all its glory bringing it with it some memorable characters and a great story that will please people of all ages. 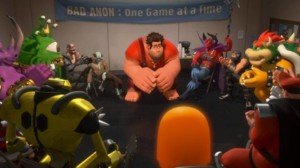 Disney have always been inventive with their movies, talking toys in Toy Story, forgetful fish in Finding Nemo and with Wreck it Ralph they have pulled out another gem. Wreck it Ralph tells the story of Ralph, a video game villain in the arcade game Fix it Felix. After years of being misunderstood by his fellow characters in the game Ralph decides to go AWOL and heads out of his game in search of better things and in doing so creates all kind of havoc.

The movie is a candy coloured adventure as is to be expected from Disney. The gaming world is intelligently designed and is fantastically pleasing on the eye. Its little references to games new and old will delight younger fans whilst also brining a sense of nostalgia to the older generations.

“You’re adorable” Ralph tells Vanellope as she prepares for her big moment in the film and he’s damn right she’s adorable. The beauty in this film lies in not only its intelligence but like in so many other Disney films, its heart. It’s impossible not to fall in love with the movie’s characters. Sarah Silverman does a fantastic job voicing Vanellope, a little girl from the game sugar rush who is a dreaded glitch in the game, her fellow characters casting her asid.  Venelope hopes to prove herself in her games big race and finally gain some recognition and respect much like Ralph himself. The relationship between Ralph and Vanellope drives the film and does a fantastic job at it. I’ve not rooted for two characters like this in a long time. Jane Lynch and Jack McBrayer also deserve credit for their characters.

Verdict: Disney have done it again. Their innate ability for originality has made them deliver what will no doubt be one of the best animated movies of the year and what is one of the year’s best movies so far. Beautiful created and fantastically scripted, Wreck it Ralph is 93 minutes of pure joy. Rating: ****

* This is a partnered post. Liam Hoofe wrote the post. He is a film student and works as a writer. All images were provided, with permission by VUE Cinemas, where Wreck it Ralph is out now!