I was lucky enough to see Rock of Ages in the theatre at an advanced screening. I enjoyed it immensely but I was sick that day, so I could not get the full effect of the movie. I will fully admit that I have seen Rock of Ages on Broadway at least 3 times in the past couple of years. It is awesome, so I was very excited to see it when it came out. 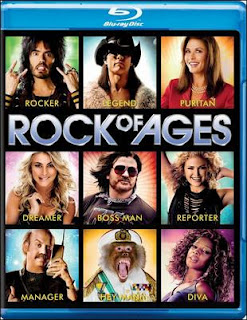 This past week, I enjoyed a pre-screening of Rock of Ages and all I can say, is it is FANTASTIC! Sure, it is not the best acting in the world.. and sure perhaps not the greatest singing but it is a FUN movie that will keep you dancing in your seats and belting out some of the greatest hits of the 1980’s! If you love music, especially from the 80’s, this is a must see movie for you!

The story start out with Sherrie (played by Julianne Hough), who takes a cross country trip to try to make it in the big city as a singer/actress. At the very opening scene, you see a great mashup of “Sister Christian” and you know from that point on, that the movie is going to be really good! Sherrie shows up on the Sunset Strip where she becomes a cocktail waitress in the Bourbon Room and meets Drew (Diego Boneta). The two fall in love… out of love…back in love, without the interference of the superstar of the 1980’s, Stacie Jaxx (played by Tom Cruise). The story plays with Stacie Jaxx leading the club to achieve popularity but then it goes down hill. The end is happy though and shows just what a great musical could do!

To say I love this movie is an understatement. I love musicals in general so I may be biased but this movie will entertain most- I can assure you! Tom Cruise was so good and funny in this movie- who knew he could sing! He not only could sing, but had a really good voice. It is actually quite hard to recognize it is Tom Cruise in that role. His acting was also superb.

There was other cameos including Russell Brand, Catherine Zeta Jones, Paul Giamatti, and Bryon Cranston who round out the fantastic cast. Russell Brand was so funny in his “boy relationship” with Paul Giamatti- I will not do any spoilers but you can only imagine that laughs those two could endure on screen. My most favorite cameo though was from the ever so talented, Mary G. Blige. She played the owner of a strip club where Sherrie will work at for a brief bit of time, and her voice was so powerful in the movie. Goose bumps when she sing- that good!

I really have no negative comments about Rock of Ages, except perhaps the voice of Julianne Hough. She was a bit off at times in some of her songs but I probably am looking at it from a Broadway perspective, which I should not be. She is so cute though onscreen it does not really matter.

Rock of Ages is a movie you need to check out and buy when it hits Best Buy next week on 10-9-2012!  You will laugh… you will sing…you will dance to the fantastic music of the 80’s!  Happy movie watching and don’t forget to rock out to Don’t Stop Believin’!

*The reviewer has been compensated in the form of a Best Buy Gift Card and/or received the product/service at a reduced price or for free.

Tweet
Share
Pin
0 Shares
I need a Spa day- How about you?
My love for Hanes- Review!