Jingle Jangle is being released next Friday, November 13 on Netflix.  You can see my full review tomorrow of this movie but this is the movie of the holiday season. It is simply amazing!

I had the chance to sit down with some of the actors from Jingle Jangle as well as attend a virtual cocktail hour with them.  The cocktail hour was great because we made some holiday drinks.  It was a Cookies and Cocktails Happy Hour with Danni Rose. We made at home a delicious Frozen Hot Chocolate following along to her instructions. I definitely plan to repeat that again very soon, perhaps while I am watching Jingle Jangle again next Friday.

For the press junket part of the day, we had 2 roundtables. One was with Madalen Mills,  Kieron Dyer and Lisa Davina Phillip and the second with David Talbert (director) & Lyn Sisson-Talbert (producer). 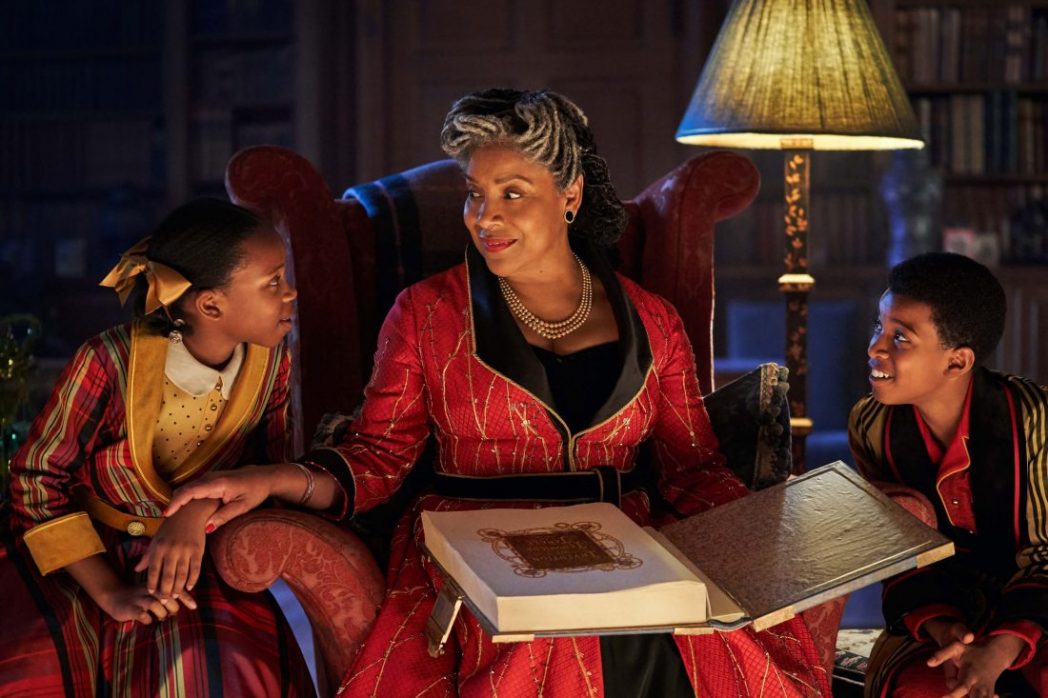 1. What was your favorite scenes in the movie and will there be a sing along?

Lyn said she loved Possible and one of her favorite set moments was when Forest broke out and sang the entire song. Lyn said she was balling during this moment and you can hear a pin drop because of the chills. Lyn said there will be some sort of sing along? David loved Make it Work which is so celebrational. It makes you just want to dance and have fun.

2. What were some of the obstacles with filming the movie?

David said they had to move to London to film it. His wife had to be producer, be a mom, and be a husband all while going to London to film.  David said he didn’t feel the stress because he had his wife (Lyn) by his side.  Lyn said as moms you always have to figure things out but it somehow falls together.  Lyn loved bringing this film to life. The flying scenes were also very tough to film.

3. What message do you want movie goers to come away with?

David writes the movie for the audience but for himself too! He said it is important to trust your dream and your inner voice.  He said no one has to see your vision but you.

4. What are your favorite Christmas traditions?

David said he and his brother would find the gifts his mother would buy early.  Lyn said her favorite traditions revolve around food.

5. How did you prepare to answer that nothing is impossible?

David said it is important to stay in touch with his inner child. If you imagine what the impossible is, it becomes light, whimsical, and fun.

6. Could you talk about bringing your story to everyone?

David said he worked on bringing this for 20 years to viewers. He and his wife are just so happy that this story can be told. The lyrics of the song mean everything to them and what their relationship between him and Lyn has been about.

7. This is Netflix’s first Live Action Musical. What was the most difficult scene to film?

David said Make it Work and Forest flying were two of the most difficult scenes to film.  Lyn said it was the dance scenes and also the CGI characters.

8. Did you have an idea where you would place the songs?

David said he had an idea until Lyn changes it.  Lyn and David come from a music and musical theater background. Lyn came out with some fabulous ideas where they should film the music numbers.

9. Is there something that didn’t end up making the film that you really loved?

There is a song called With Love that didn’t make the movie but is wonderful. She said they are saving it for something special.

10. Was there any scene that you were excited to come to life?

He said what Netflix allowed them to do was more than they could ever have imaged.  He was told to not write his budget, but write his story. That is how he did it and that was great advice.

11. What was behind your decision to cast all cultures?

David said the film’s story had nothing to do with race or culture. It was about showing humanity for everyone.  Lyn’s idea was to infuse Victorian fashion with African design.  This movie is for the world and showed so many races/cultures.

1.Can you talk about your favorite part of the role?

2. How was it filming the snowball scene and the dancing scenes?

They all said it was just so much fun to film. They laughed throughout the whole time filming it.

3. What is your favorite song?

This day is Lisa’s and Kieron’s favorite song because it brings about so much hope. Madelen’s favorite is Make it Work. They all want a sing along.

4. What was it like to work opposite all these great actors?- to the kids

The kids said it was unbelievable to be opposite them. They said it was an amazing experience for them. It was also very inspiring.

5.  What is your favorite moment of filming, The Square Root of Impossible?

Madelen said the whole song is so wonderful. She said the dancing on the ledges was so much fun.

6. What is your favorite Christmas memories?

Play music, spend time with family, and watch football is some of Madelen’s favorite traditions. Kieron said it is putting up the Christmas tree and eating family dinner.

7. If you can create any toy, what would it be?

Madelen said it would be robot Buddy to do her chores, etc.

8.  When did you find out you were going to be Journey?

Madelen got the first audition in early December. Then after School of Rock closed, she was notified she would be the finalist. It was down to 4 and then she got picked. It was a long process but well worth it!

9.  What do you hope viewers would get out of this movie?

David told her to definitely ad lib! It was highly encouraged.

11. What the hardest thing to film?

Madelen said probably Possible with all the acting, dancing, and singing.  Lisa said it was the Miles and Miles number because she was wearing a thick corset in the middle of summer.

I will be back tomorrow for more Jingle Jangle!

A musical adventure and a visual spectacle for the ages, Jingle Jangle: A Christmas Journey is a wholly fresh and spirited family holiday event. Set in the gloriously vibrant town of Cobbleton, the film follows legendary toymaker Jeronicus Jangle (Academy Award winner Forest Whitaker) whose fanciful inventions burst with whimsy and wonder. But when his trusted apprentice (Emmy winner Keegan-Michael Key) steals his most prized creation, it’s up to his equally bright and inventive granddaughter (newcomer Madalen Mills) — and a long-forgotten invention — to heal old wounds and reawaken the magic within. From the imagination of writer-director David E. Talbert and featuring original songs by John Legend, Philip Lawrence, Davy Nathan, and “This Day” performed by Usher and Kiana Ledé, Jingle Jangle: A Christmas Journey reminds us of the strength of family and the power of possibility.

*Thanks to Netflix for inviting me to this press conference.*