This past week in LA I had the chance to meet Sherry Yard, Judge on “The Great American Baking Show: Holiday Edition” and three-time James Beard Award-winning pastry chef and Carter Oosterhouse, Judge/Host on “The Great Christmas Light Fight.  It was amazing to be given the opportunity to talk to both of them about their shows on ABC’s 25 days of Christmas. 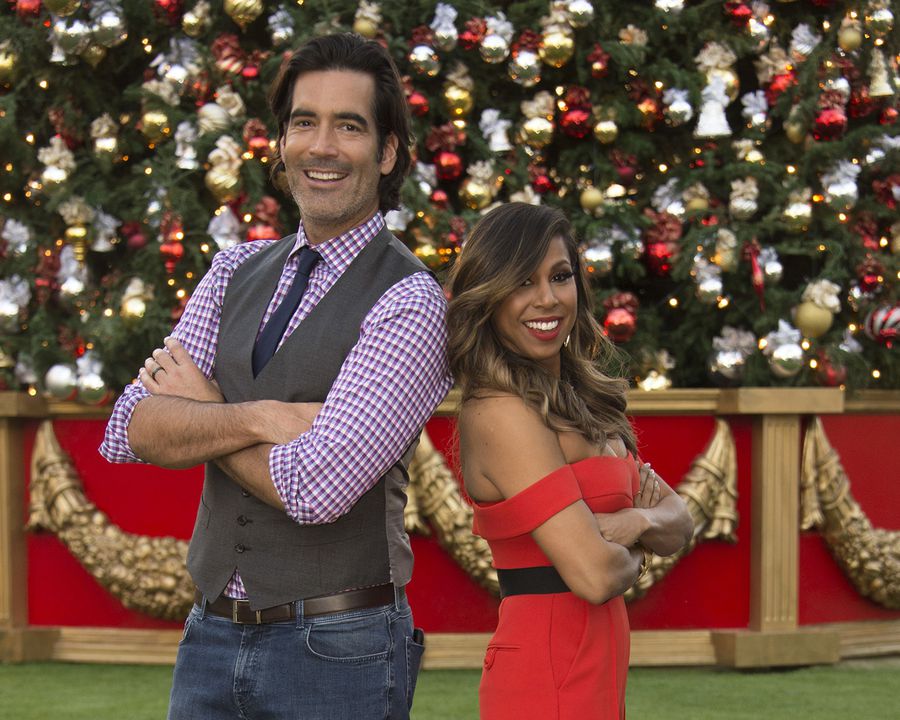 THE GREAT CHRISTMAS LIGHT FIGHT’ TO AIR AN ALL-STARS SPECIAL

SHOWCASING THE BEST OF THE BEST DISPLAYS FROM THE FIRST FIVE SEASONS, MONDAY, DEC. 10, ON ABC

As part of “25 Days of Christmas,” “The Great Christmas Light Fight” will feature an all-stars special highlighting the most magnificent and over-the-top displays in America, MONDAY, DEC. 10 (10:00-11:00 p.m. EST), on The ABC Television Network, streaming and on demand. Produced by Fremantle, the immensely popular series features returning celebrity judges Carter Oosterhouse and Taniya Nayak.

Season 6 of “The Great Christmas Light Fight” showcases the wildest and most spectacular Christmas displays in America. In each one-hour episode, four families from all around the country decorate their homes to the extreme in the hopes of winning the coveted Light Fight trophy and a $50,000 prize, with a total of $300,000 given away for the season. This season, as the temperature cools down, the competition heats up when families invite us inside their homes to witness their fantastic Christmas décor for the very first time. In addition to all of the stunning inside/outside displays, the first-ever “Heavyweights” episodes showcase light shows that have grown too large for any home.

“607 – All Stars” – “The Great Christmas Light Fight” all-stars special episode celebrates the most incredible Christmas displays from the past five seasons on the show. With over $1.5 million in prizes given away to date, this special episode highlights past competitors by featuring different categories of displays for an all-star lineup. So, grab your cup of hot cocoa and tune in for some “Light Fight” holiday throwbacks! 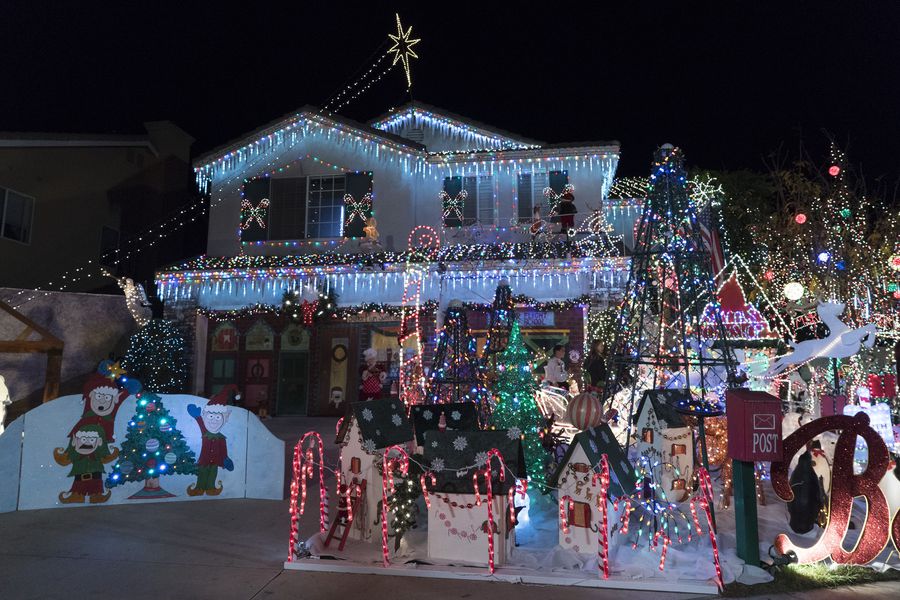 The Great Christmas Light Fight” showcases the wildest and most spectacular Christmas displays in America. In each one-hour episode, four families from all around the country decorate their homes to the extreme in the hopes of winning the coveted Light Fight trophy and a $50,000 prize, with a total of $300,000 given away for the season. As the temperature cools down, the competition heats up when families invite us from out of the snow inside their homes to witness their fanatic Christmas décor for the very first time. In addition to all of the stunning inside/outside displays, the first ever “Heavyweights” episode will showcase light shows that have grown too large for any home. The Great Christmas Light Fight is on Mondays at 8 PM on ABC.

Before coming to the interviews, I honestly had not seen The Great Christmas Light Fight. However, as I was dozing to sleep after my red eye, my daughter was watching something and I opened my eyes and it was this very show! I could not believe it! She told me she loves this show so much because it showcases all of the best of the Christmas season with all the festive lighting and blow ups that feature all around the people’s houses.  So her and I watched a few episodes that day and it will now will be on our Monday night television watching. Each episode there are 4 families highlighted and at the end, Carter Oosterhouse awards the $50,000 to the best Christmas light home. It is such a fun show that is great for the whole family! 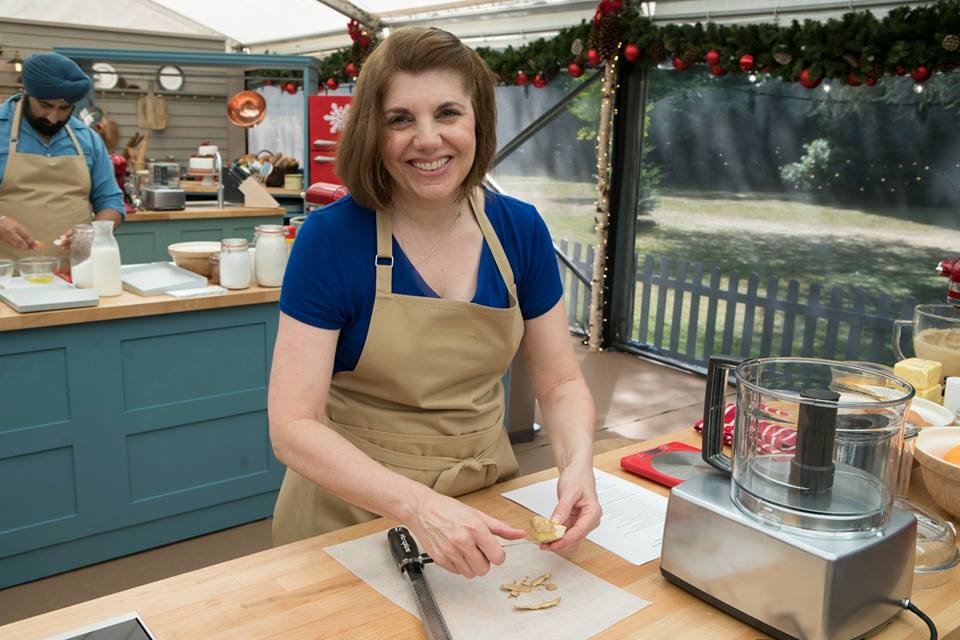 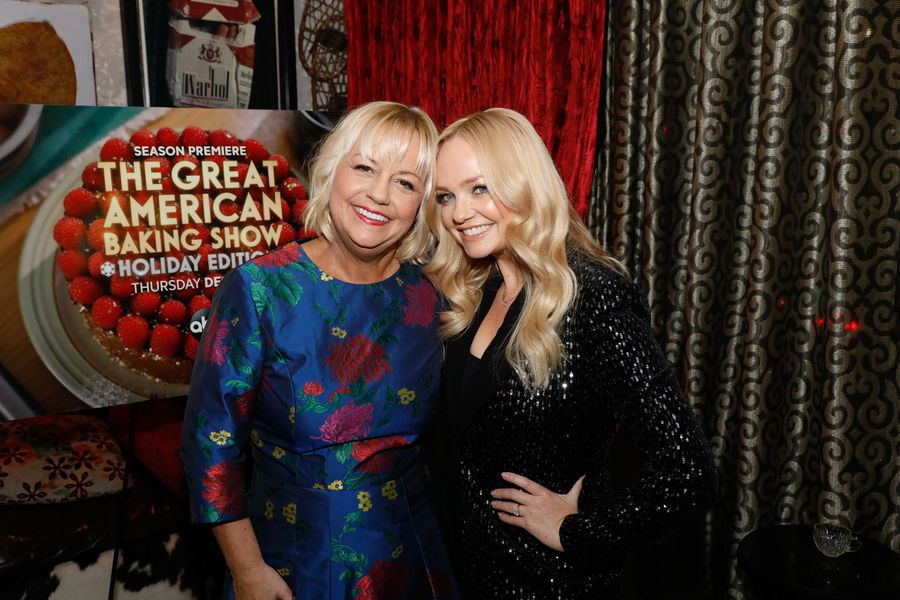 Based on the hit U.K. series “The Great British Bake Off,” “The Great American Baking Show: Holiday Edition” features bakers from across the country battling through 18 total challenges with six challenges throughout each two-hour themed episode, all in the hopes of being crowned “America’s Best Amateur Baker.” Emma Bunton and Anthony “Spice” Adams host. Best-selling cookbook author and baker Paul Hollywood and James Beard Award-winning pastry chef Sherry Yard are judges.

“The Great American Baking Show: Holiday Edition” is broadcast in 720 Progressive (720P), ABC’s selected HDTV format, with 5.1-channel surround sound. A TV parental guideline will be assigned to this program at a later date.

ABOUT THE SHOW: Showcasing bakers from around the country each week, The Great American Baking Show: Holiday Edition puts their best recipes forward as they compete in holiday-themed challenges, all hoping to be named America’s Best Amateur Baker. Joining as host this season, Spice Girl and television personality Emma Bunton, alongside returning host Anthony “Spice” Adams, will present bakers with weekly challenges. Each week, James Beard Award-winning pastry chef Sherry Yard and baker and best-selling cookbook author Paul Hollywood will taste decadent and delicious treats while sharing advice and commentary.  The Great American Baking Show returns tonight at 9 PM EST on ABC and continues onwards in this time slot.

This is a show I can not wait to watch with my family. What better way to get in the holiday spirit than by watching a show dedicated to holiday baking! This is sure to be a hit on ABC and features many wonderful bakers and celebrity chef judges.  Life doesn’t get much sweeter than this! The #AmericanBakingShow returns to ABC TONIGHT at 9|8c on ABC!

Like I said before we had the chance to interview Carter Oosterhouse and Sherry Yard. Here is some of what we discussed at our sit down interview that day:

When they came into the room, they each brought a present for us including delicious chocolate bars and lights! 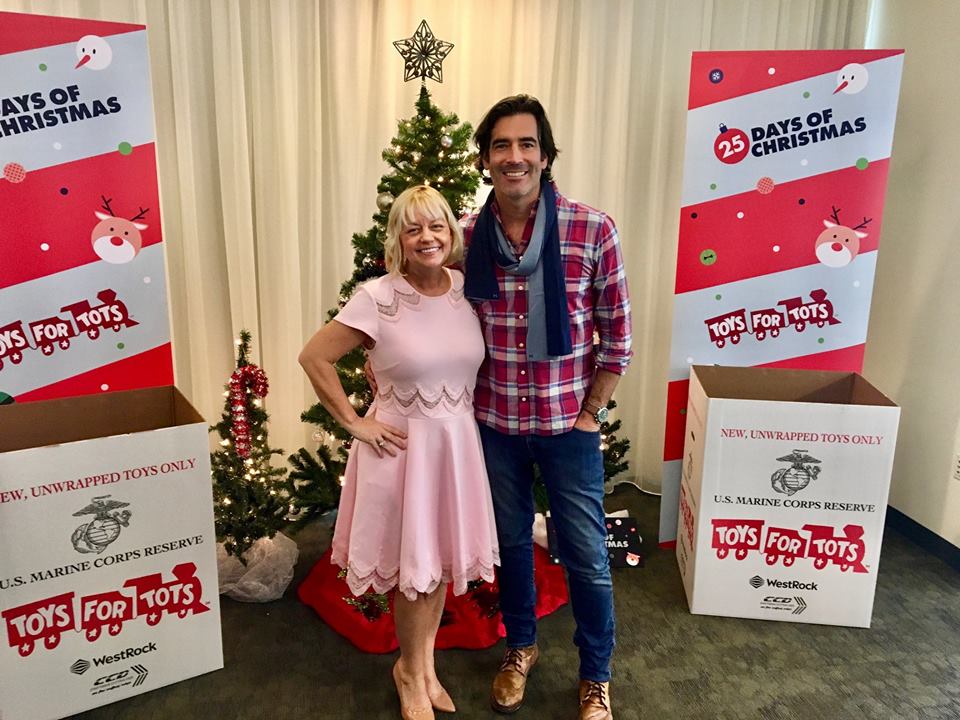 I stopped. After being on this show, you realize, I cannot compete with any of these people, and I feel inadequate to some degree. Some of these people design their space with four million lights. I do more like DIY stuff and craft stuff, being a designer-builder-carpenter, that’s where my head is at. -Carter Oosterhouse

Well, besides the four million lights, which is crazy, just visually to see something like that is quite challenging. Now they also have tech stuff and it has gotten so much better than it ever was before. And, so, when you see people using these RGB lights that are just so technically advanced and they sync them with music. It is amazing! – Carter Oosterhouse

Question 3:   Do you ever get any repeats? Like they’re like I want do it again, because we’ve done it and we wanna do it again?

No, but we started seeing is people on the show now that saw the show and started from the very first season. So, they’re like I saw the Taylor’s episode in Kokomo, Indiana, and now I wanted to replicate what they did but do it better. –Carter Oosterhouse 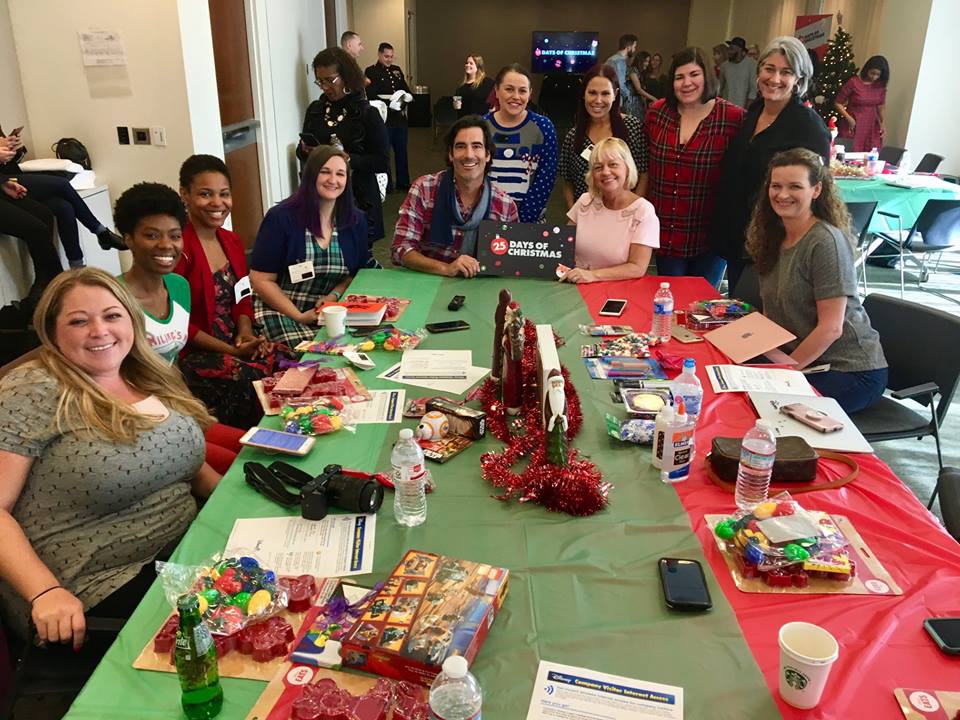 Question 4:   Asked to Sherry Carter. So, how do you compare? I mean you’re a job. How do you like choose side?

I lose about ten pounds because I’m gonna gain about 15 pounds. That’s the first preparation. I gain during the show because I really enjoy what I do, and I love pastries. I love food. And, so, I’m judging, if they had to make two items, I actually was eating both. –Sherry Carter

Question 5: If there was one, only one dessert you could eat for the rest of your life, what would it be?

Sherry said it would be ice cream.

Question 6 :   What is one thing that’s really blown you away? You said you’ve seen a lot of surprising, unique things. Is there anything in particular that sticks out in all the episodes you’ve done?

So, for me I kinda  like all of the weird stuff. I feel it’s different. And what I mean by weird is like when it’s different than what you would expect Christmas to be. So, when you see lights and blow molds and stuff like that, it’s kind of traditional. But when you see stuff where they can mix in like dinosaurs, or they can mix in stuff that you would be like, wait, what?? How did this? And why do you have a helicopter?

Different parts of the country definitely have different design taste. All of them are unique to their own, and they’re all the same Christmas spirit, which is fantastic. But they’re all unique in the way they experience Christmas. -Sherry Carter

It was great talking to both of them that day about their shows!

The Great American Baking Show: Holiday Edition” premieres on Thursday, December 6 at 9|8c with a two-hour episode, and will also be available streaming and on demand after premiere. The Great Christmas Light Fight  airs Mondays at 8|7c on The ABC Television Network or streaming or on demand.