**Disney/Marvel provided me an all expense paid trip to LA for this event. All my opinions are my own and not swayed by outside sources.*

Some of the key fun to had at “Summer of Heroes” includes: 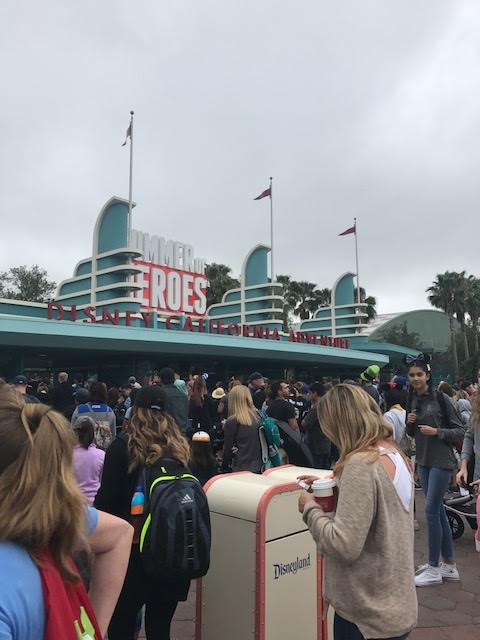 1. Guardians of the Galaxy — Mission: BREAKOUT! 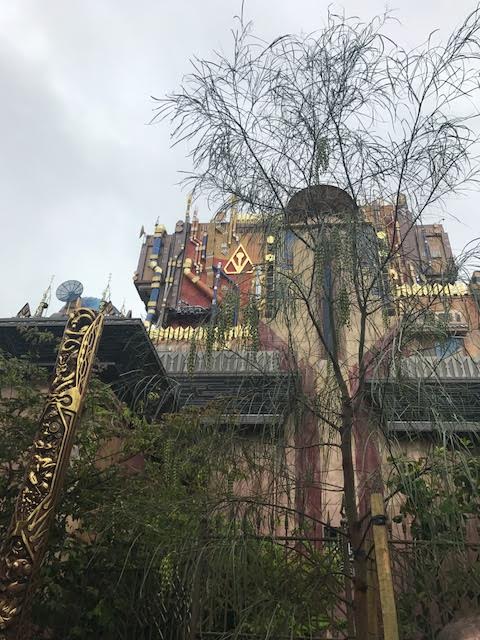 Guests become the protagonists of a rockin’ new adventure in Disney California Adventure Park as they help rescue a cosmic gang of misfits in Guardians of the Galaxy – Mission: BREAKOUT! This thrilling attraction is fueled with high-energy, hilarious action that will be fun for Super Hero fans and those who are discovering this story for the first time.

Guardians of the Galaxy – Mission: BREAKOUT! entices guests with an original storyline based on “Guardians of the Galaxy” films, comics and animated television series, with a rapid rise into chaotic adventure and surprising visuals. The fast-paced action rocks to the beat of music inspired by the films’ soundtracks, including classic rock and pop music from the ‘60s, ‘70s and early ‘80s. And with multiple ride profiles, guests never know which adventure they’ll get. 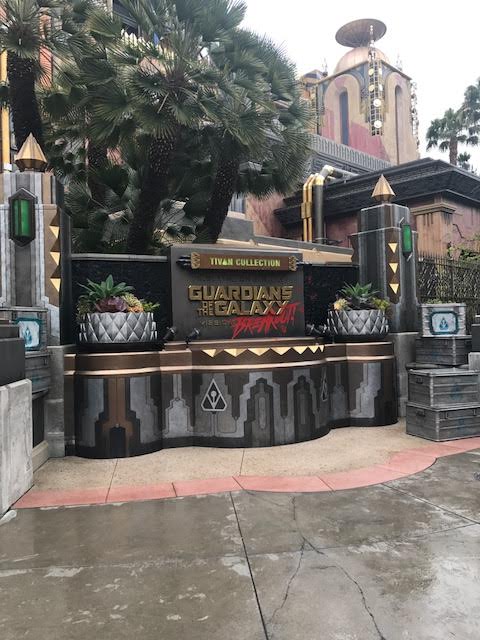 “Guardians of the Galaxy – Mission: BREAKOUT! brings an all-new epic adventure to the Disneyland Resort, and it’s the only Disney park in the universe where guests can step into a Guardians of the Galaxy story,” said Bob Chapek, chairman of Walt Disney Parks and Resorts.  “Like the smash-hit films that inspired it, this new attraction is action-packed, full of irreverent humor, and features an ‘awesome mix tape.’  It’s a fantastic way for guests to experience the Super Hero universe like never before.”

Walt Disney Imagineering collaborated with James Gunn, director of the “Guardians of the Galaxy” films, Kevin Feige, president of Marvel Studios, most of the main talent from the films along with Joe Quesada, chief creative officer, Marvel Entertainment, and Marvel Themed Entertainment on the story of the attraction, to develop an experience where guests step into a story with these characters for the first time.

“I can’t be more pleased to have partnered with Walt Disney Imagineering in bringing the Guardians of the Galaxy characters to this new, immersive form of storytelling,” Gunn said. “It’s been exciting and a lot of fun to help direct and shape the experience so that it has all the heart and fun and humor of the Guardians movies.” 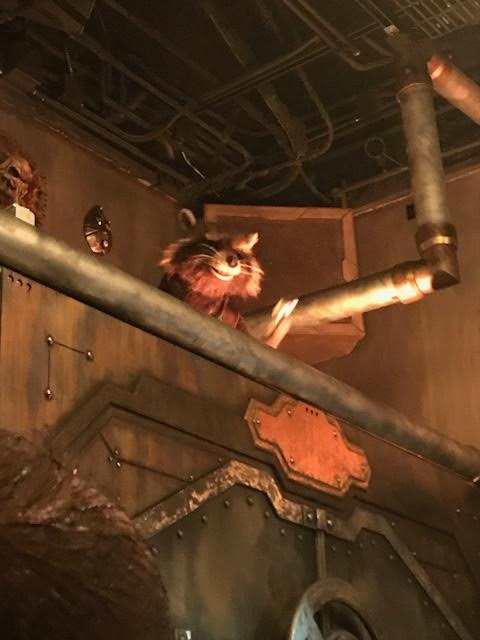 In addition to the new attraction, Summer of Heroes, Guardians of the Galaxy characters and Super Heroes appearing in Disney California Adventure for new exploits and Heroic Encounters. While some of these will be year-round, others will be available only from May 27-Sept. 10. Summer of Heroes inaugurates an ever-expanding universe of Super Hero stories at Disney California Adventure that will become even bigger over time. 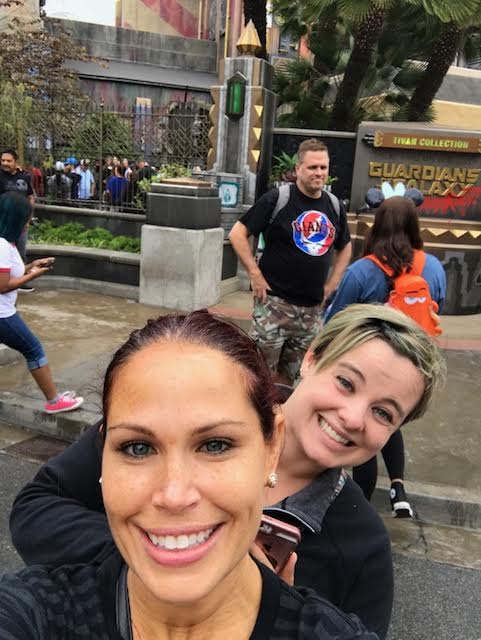 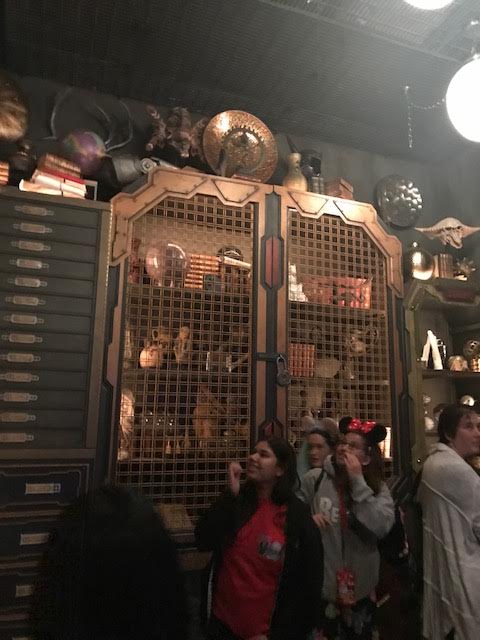 The Guardians of the Galaxy – Mission: BREAKOUT! adventure begins as guests enter a grandiose, 183-foot tall fortress. They discover that the Guardians have been imprisoned by the arrogant, acquisitive Taneleer Tivan, known as The Collector. Guests join a daring escape plan devised by Rocket, who once again proves his uncanny ability to break free from any prison or captivity.

The dominating fortress is adorned with antennae, satellite dishes and other mysterious apparatus and is accented in shimmering hues of blue and gold. At night, with special lighting, it pulsates with imposing power. A gilded, eight-foot-tall statue of The Collector stands at the entrance to the fortress, towering over guests. These VIP guests of The Collector enter to view the unique “Tivan Collection” of relics and species from all over the universe. His latest acquisition: The Guardians of the Galaxy.

The Lobby of the fortress is both fascinating and creepy – filled with display cases that hold artifacts and living creatures, which The Collector has obtained and made available for public viewing. In a welcome video, The Collector explains how he has trapped the Guardians of the Galaxy high atop his fortress in secured glass cages that are wired with power from a massive generator and suspended over a deep abyss.

Before leaving the Lobby and entering The Collector’s Office, guests hold up their hands to be “bio-scanned” for security clearance. In the Office, even more of The Collector’s relics are on display and, as in the Lobby, the collection contains some hidden references that will delight dedicated Super Hero fans and Disney fans.

Suddenly, Rocket appears, telling guests he needs their help. Using their security clearances, he can hijack the gantry lift to the top of the fortress, disable the generator, and free his friends. 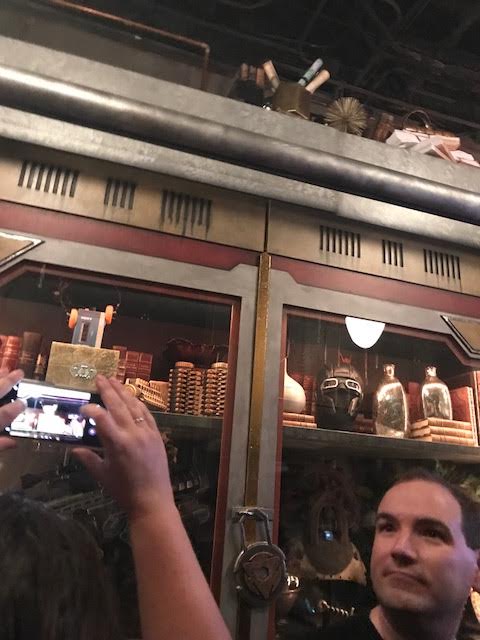 Of course, Rocket’s plan faces challenges. After guests enter the gantry lift, Rocket overrides The Collector’s recorded tour spiel with music from the tape player of Star-Lord (aka Peter Quill). Soon, the gantry is shooting up into the fortress, then plummeting downward as Rocket attempts to take control of the generator.

It’s here that guests experience one of the attraction’s six different ride profiles, each synchronized to one of the songs on the “awesome mix tape”:

Guests soon learn that, even if the rescue is successful, the resulting chaos may create problems of its own!

To help create the attraction, Disney Imagineers used Virtual Reality technology to pre-visualize the Tivan Collection, The Collector’s Office and other parts of the Guardians of the Galaxy – Mission: BREAKOUT! experience.

The ride system has more high-speed ride time than ever before, and the thrill factor gets going as soon as the gantry lift doors close and the music stars blaring. Each song is accompanied by a different up-and-down ride profile and story scenes, making every visit to the attraction unpredictable.

Rocket makes multiple appearances in the attraction, including as a sophisticated Audio-Animatronics character who invades The Collector’s Office to ask guests for a hand with his escape plan.

From the anticipation guests will feel as they enter The Collector’s Fortress to the sense of discovery as they tour the Tivan Collection to the thrills and elation of participating in a successful breakout, Guardians of the Galaxy – Mission: BREAKOUT! is an unforgettable adventure into the Super Hero universe at Disney California Adventure.

MY THOUGHTS ABOUT THE RIDE:

I will tell you that I was SCARED out of my mind for this ride. I think the anticipation of this ride is just as exciting as the ride, because everyone is so pumped to walk on those elevators. I have been on TOT many times before but with talking to employees of Mission Breakout, they tell you that it is faster and there are more drops. While I did not think the ride was any faster than TOT, I did think there was WAY more drops than TOT.

When the ride starts, they shoot you straight up which is different than how TOT started. Along the way we get introduced to the Guardians and follow their story through the ride. The ride is quite fast (2 minutes in length) so I had a hard time following the story because within a second, you were dropped again.

I would have liked to have gone on the ride over and over again, but I will settle for the two times I went on it. Both times we had the song “Give Up The Funk” which is an awesome song, but I would have loved to hear some others as well. It is all random though, so no matter what elevator you go on you have a 1/6th chance of getting each song. It just so happens the two times we rode we did in fact have the same song, but the employee at the ride told me once they hit the button to start it, it is completely random.

This is a total thrill ride and I loved every second of it. Being a big Marvel fan, I was elated with how fantastic this ride was! Every Marvel fan, should experience Mission:Breakout! 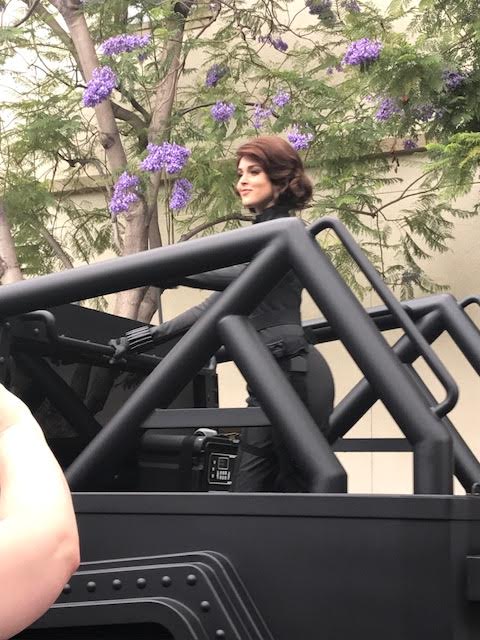 6. Find Apparel and Gifts at the Collector’s Warehouse!

7.  Summer of Heroes Food & Beverage–Like all Super Heroes, you need the right fuel and training to make it through the day. Power up with Groot-shaped bread, available in sourdough and jalapeno-cheddar flavors, or with The Most Dangerous Tacos in the Galaxy. 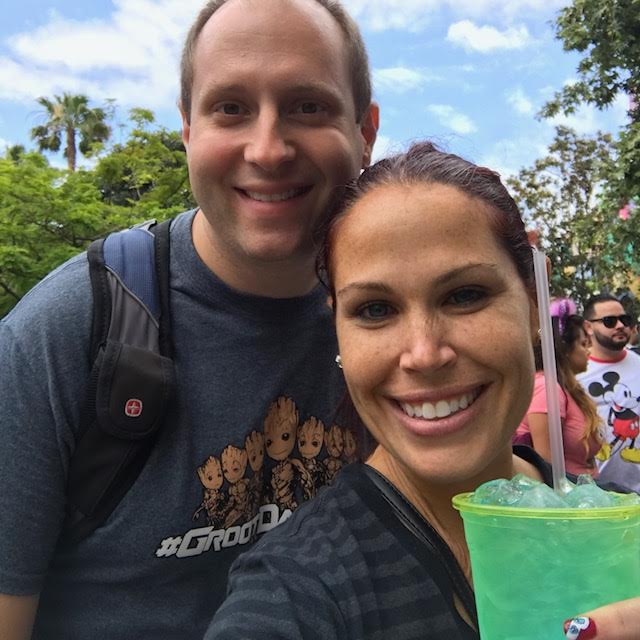 As part of the Summer of Heroes celebration at Disney California Adventure Park, guests will find Super Hero-inspired food and beverages at six different locations in the Hollywood Land area of the park, including Schmoozies, Award Wieners and Market Place. New locations include the Cosmic Canteen and Knowhere Eats. Dishes and drinks in lively colors of green, purple, red, blue and orange reflect the bold personalities of some favorite Super Heroes. One of the fun new desserts is inspired by baby Groot. The Angry Little Pudding Cup features chocolate pudding with crumbled chocolate sandwich cookie, whipped cream and funnel cake fries. Guests who enjoy the Mickey-shaped sourdough bread available in Disney California Adventure will want to check out the fun, new Groot-shaped breads, in sourdough and jalapeno-cheddar flavors. The Most Dangerous Tacos in the Galaxy, a must-try, are inspired by the fiery personality of Gamora, featuring barbacoa, green onion slaw and habanero salsa. In addition, guests can try the Savory Strength Falafel Pita, Super Size Subs, Space Outpost Tacos, Gamma-Sized Donuts and Bifrosties (shave ice with fun themed flavors)

It was a hot day when we visited and I immediately tried one of their speciality drinks at the “Summer of Heroes.” I forgot the name but it was a blue hard lemonade to go along with the Superheroes theme.  My girlfriend and I each had one and we both remarked how delicious it was. If you like to drink, they also have beer and wine flights that you can purchase and well as some non- alcoholic drinks that stays with the superheroes theme.

Since we were eating lunch right after, I didn’t taste the food but I saw just how adorable the food was! The Groot-inspired bread looked out of this world and all in the shape of Groot. It was AMAZING to see that!

Also, the dancing Groot cup was a huge hit with a lot of my fellow bloggers and friends. Most of the food and drink were available right at the start of “Summer of Heroes” as you walk in, in front of the big sign. You can not miss it!

And, of course, you’ll want to visit Cars Land, still a big guest favorite after opening five years ago this month! Walk down iconic Route 66 and visit your favorite Radiator Springs residents, Lighting McQueen and Mater. Put your racing skills to the test at Radiator Springs Racers, join the famiglia at Luigi’s Rollickin’ Roadsters or go for a swing at Mater’s Junkyard Jamboree.

Learn more about Cars Land and its attractions on the Disneyland Resort website, http://Disneyland.com

Later this summer, some of the classics re-open at Disneyland Park: “Fantasmic!” and the Disneyland Railroad and the Rivers of America attractions.

Read more about the Rivers of America attractions 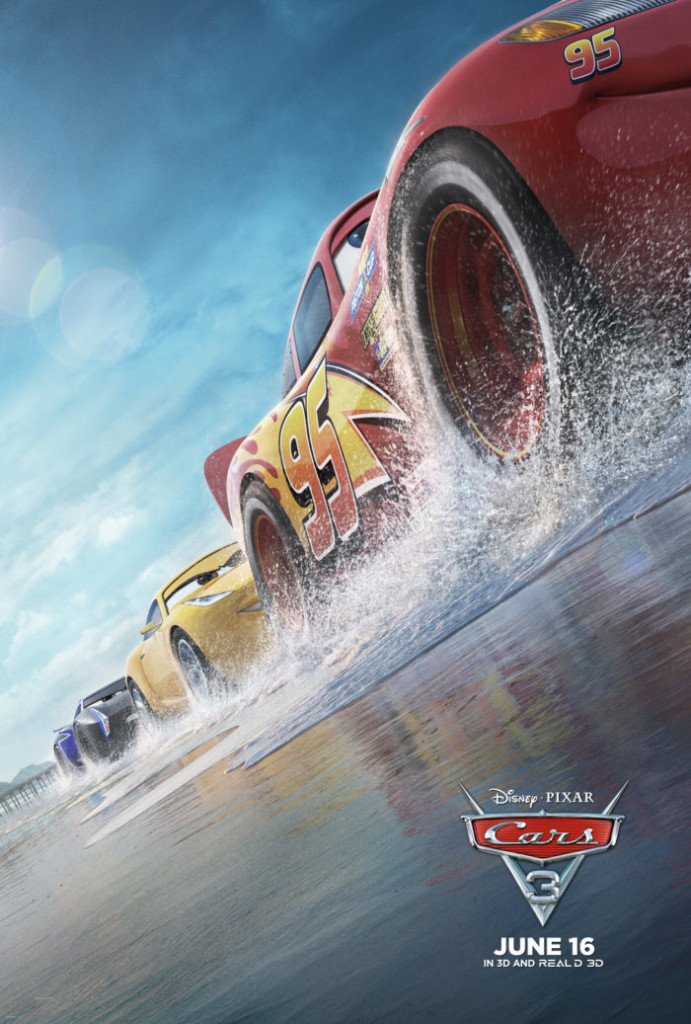