Have Mercy! Uncle Joey is back! My favorite show growing up was definitely Full House. When I found out they were doing the sequel to Full House, called Fuller House on Netflix, I was SO EXCITED!! These episodes are so good and catchy that you will finish the whole DVD in a couple of days, if not a day! 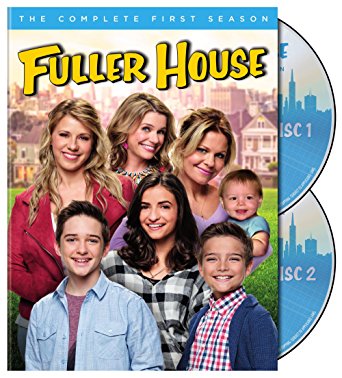 The original Full House, which centered on three grown men raising three girls in San Francisco, premiered in 1987 on ABC and became an instant hit with viewers. The family friendly series became a pop culture phenomenon. It was praised by fans for its wholesome comedy, lovable characters and valuable life lessons. It aired for eight successful seasons and later aired in syndication.  Fuller House premiered on Netflix in February 2016 and has already been renewed for a second season.

“We think this release will be a big hit with consumers. The longstanding success of the original Full Houseon DVD, coupled with the popularity of the return of the series on Netflix, demonstrate there is a demand forFull House content,” said Rosemary Markson, WBHE Senior Vice President, TV Marketing. She added, “We’re thrilled to see the revival of this legendary family series, and we’re excited to release it on DVD. Now a new generation of fans will be introduced to this very special show.”

All 13 individual episodes of the first season of Fuller House will be available to own on February 28, 2017 on Digital HD. Digital HD allows consumers to instantly stream and download all episodes to watch anywhere and anytime on their favorite devices.  Digital HD is available from various digital retailers including Amazon Video, CinemaNow, iTunes, PlayStation, Vudu, Xbox and others.

BE SURE TO PICK UP FULLER HOUSE TODAY!

Tweet
Share
Pin1
1 Shares
Hugaboo is a LIFE SAVER FOR NEW MOMS!!!
5 Ways I Don’t Let Pain Rule Me When I Work Out!