I have received information and material from AstraZeneca. The opinions stated are my own. This is a sponsored post.

LCAM stands for Lung Cancer Awareness Month, and it’s a very important thing to be a part of. Last month was Lung Cancer Awareness Month and what makes LCAM so important is that while lung cancer is the second most common cancer (accounting for 14% of all cancer diagnoses and the leading cancer killer of both men and women) awareness of this cancer is far lower than it should be. That’s especially true considering all of the advances that have been made in the fight against lung cancer. The goal of LCAM is to bring awareness to this cancer and hope to those who suffer from it.  We should raise awareness of lung cancer not only in November but every month of the year. 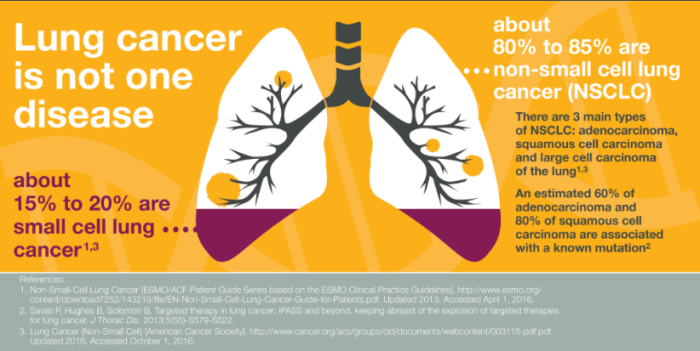 While I have not personally been touched by lung cancer, I have dear friends who have. They’ve watched their family members go through the gamut of emotions that comes with finding out that they have cancer. They’ve also gone through those emotions of uncertainty and fear about the future and what it might hold.

While LCAM is about bringing awareness and hope, it’s also about bringing information. It’s important to know just how serious lung cancer is. About 1 in 4 cancer deaths are from lung cancer. In fact, each year, more people die of lung cancer than colon, breast, and prostate cancer combined. That’s because, as I mentioned earlier, it’s the second most common cancer.

Now that the scary stuff is out of the way, let’s move on to the hopeful stuff. The stuff that LCAM is all about. While lung cancer is a frightening diagnosis, there IS hope. The biomarker testing I mentioned earlier is a HUGE step forward in the treatment of the disease, giving oncologists the information they need to help their patients in the most effective way possible. Today, there’s more hope and treatment options than ever before, and researchers are even hoping to one day treat lung cancer as a chronic disease.

That’s why LCAM is so important. People need to know that there is hope. There is a future. People with lung cancer and people with loved ones who have lung cancer need to speak out and fight the stigma associated with this cancer. Thousand of patients are fighting this disease every day, and many, many more of them are winning than ever before thanks to medical advances. This is a disease that people can stand up to. There’s no need to hide. THAT’S what LCAM is all about.

LCAM – Find Your Voice and Your Hope

LCAM stands for Lung Cancer Awareness Month, but it’s about so much more than awareness. It’s about hope for the future. It’s time to throw off the blanket of fear and step forward to say, “I will fight. I will help my family fight.” There IS hope. With advances like biomarker testing, oncologists are more capable of treating the disease than ever before. So while LCAM may be over, the fight and the need to speak out is still very much needed. There is hope. There is life. There is a future. Embrace the spirit of LCAM and make every day better than the one before.