*Travel and accommodations provided for the KUBO press trip in Portland. All Amy’s opinions are her own and not swayed by outside sources.*

Hi guys! It’s Amy from As The Bunny Hops, and I’m back to share a little about the many, many puppets that inhabit the world of Kubo and the Two Strings. You can find out more about the movie here and read about my interview with director Travis Knight and producer Arianne Sutner here. 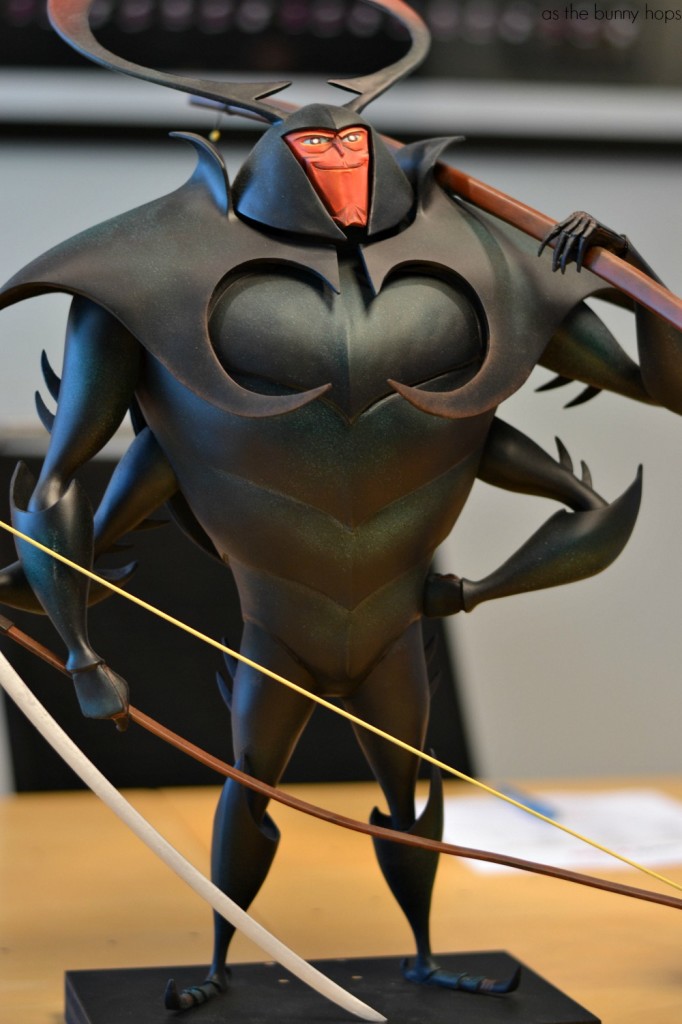 All puppets start with extensive planning that includes drawings and the making of maquettes. Maquettes are like small statues that serve as the basis for building the actual puppets. 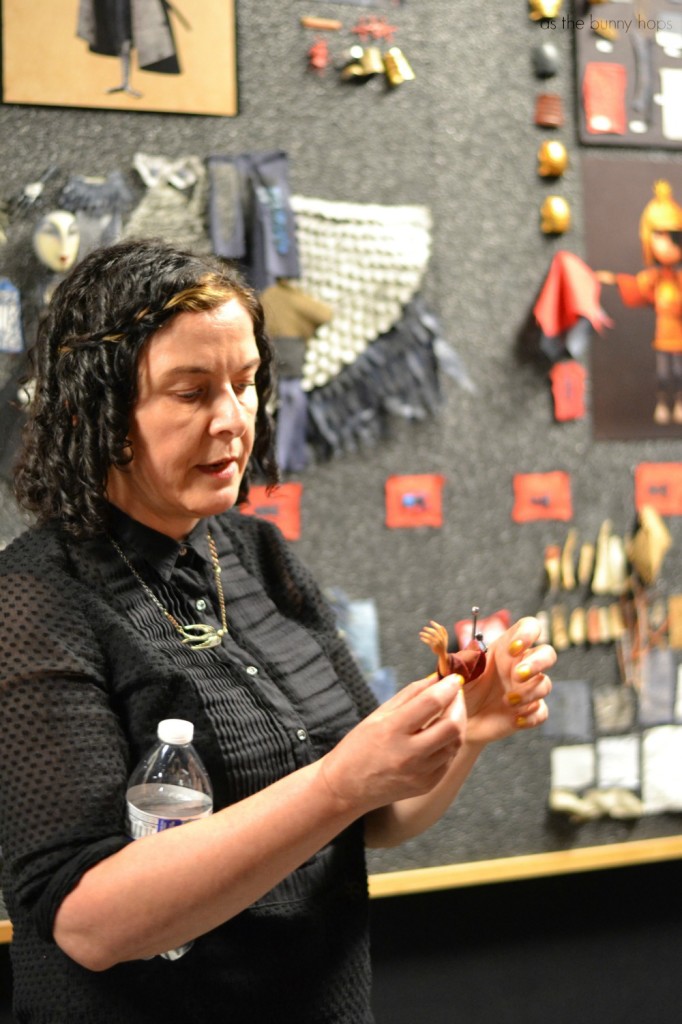 Once the original plans for the puppets are developed, the costume department gets to work. In the case of Kubo and the Two Strings, that included extensive research into traditional Japanese dress for costume designer Deborah Cook. 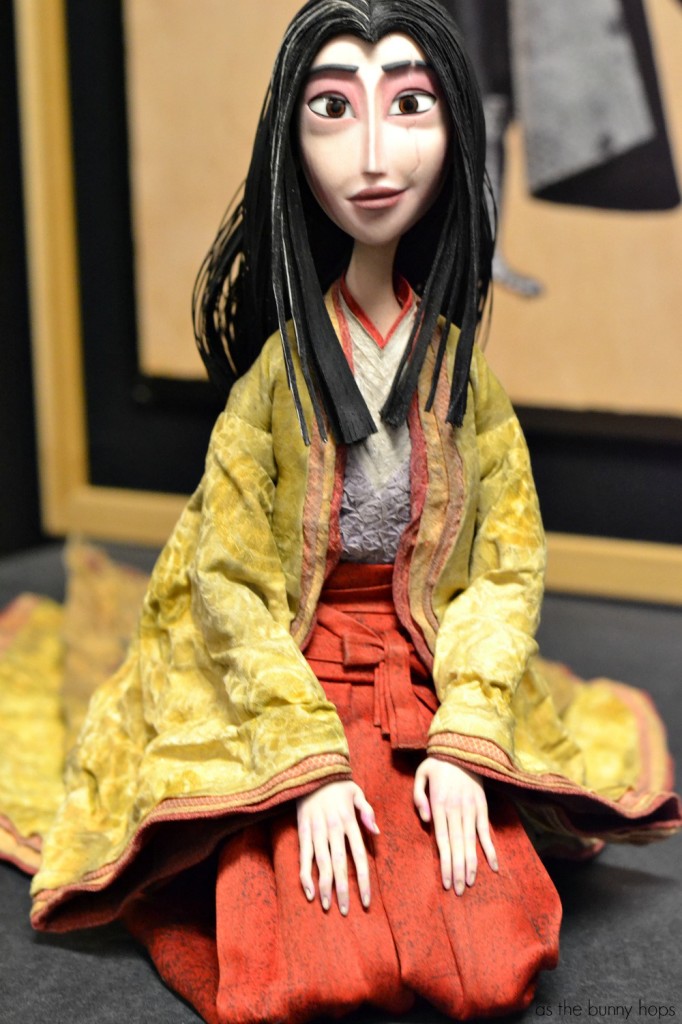 Obsessive detail goes into each costume. I picked up the trail of kimono worn by Kubo’s mother and couldn’t believe how heavy it was! Very specific fabric folds, according to custom, were used to create her costume. 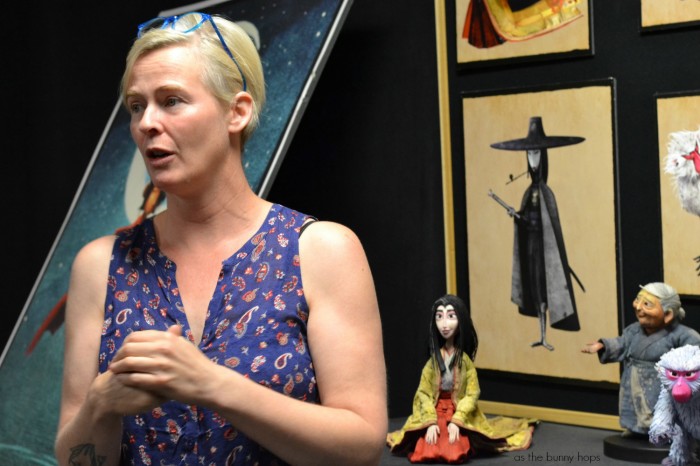 Georgina Hayns was the puppet fabrications supervisor for Kubo and the Two Strings. Her department works out the mechanical needs of each puppet. 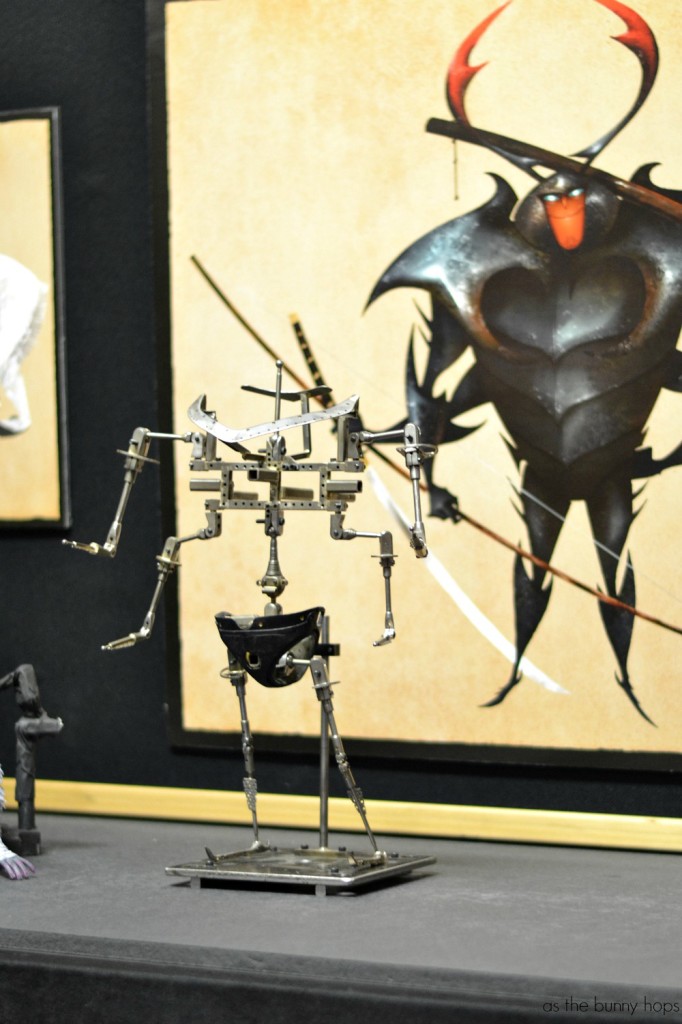 Every puppet gets an armature that allows them to be positioned during the animation process. A variety of different joints are used to create the different movements that will be needed. 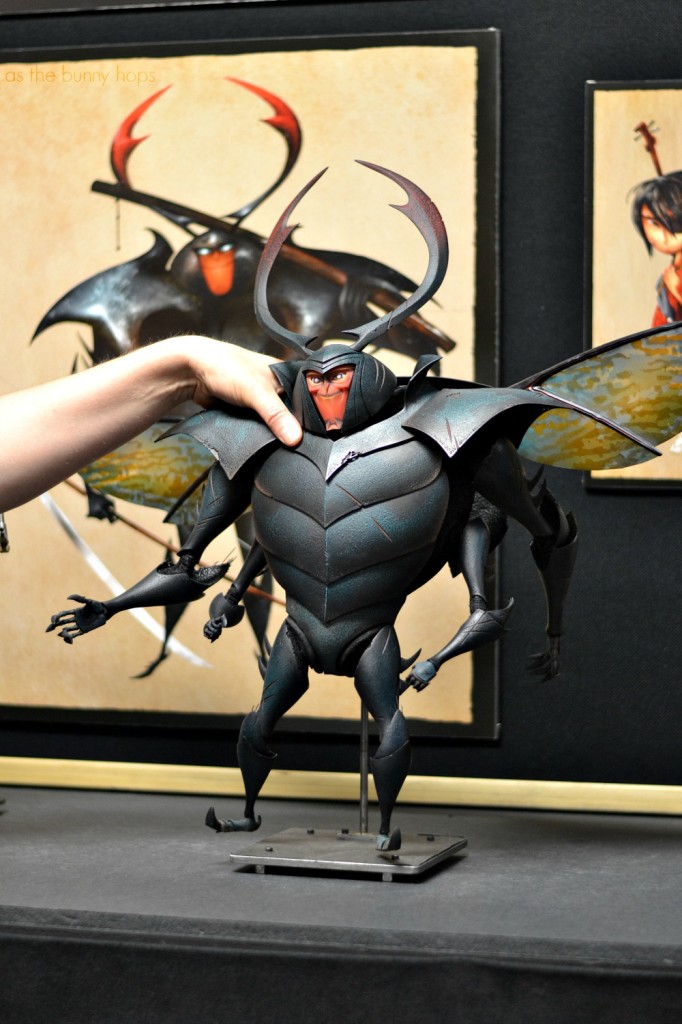 Each production creates new challenges. In this case, the character Beetle required both an internal armature as well as an external exoskeleton that would work in tandem to replicate his beetle-like body motions. 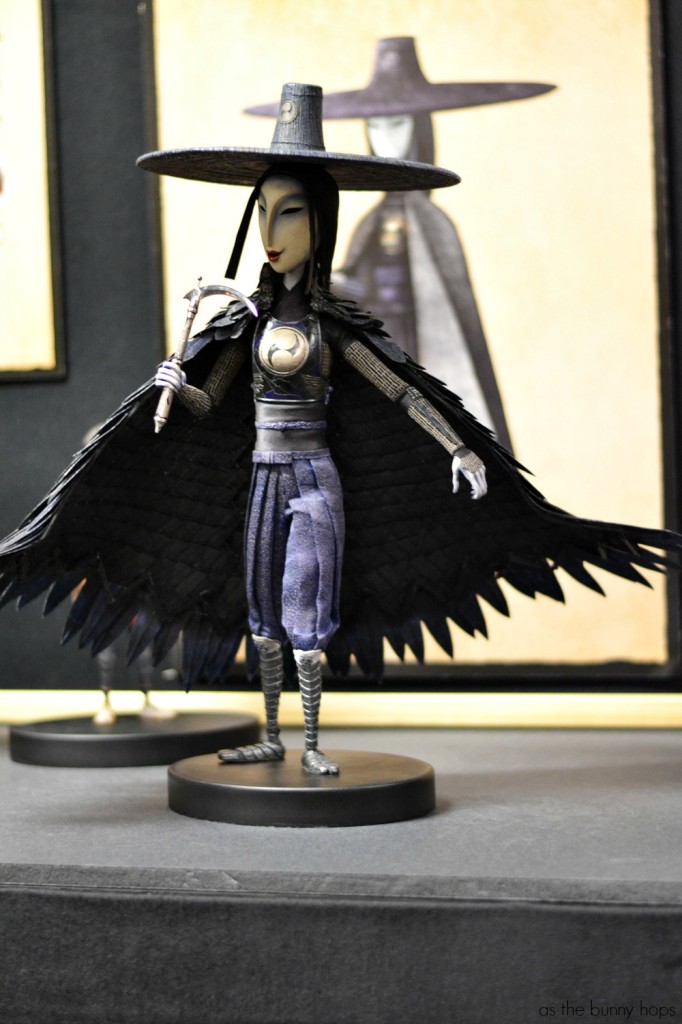 Look closely and you can see the structure added to the feather cape worn by The Sisters. It was, in part, created by weaving piano wire together to allow the ability to position the cape. This gave it the ability to replicate the movement of a cape in wind. 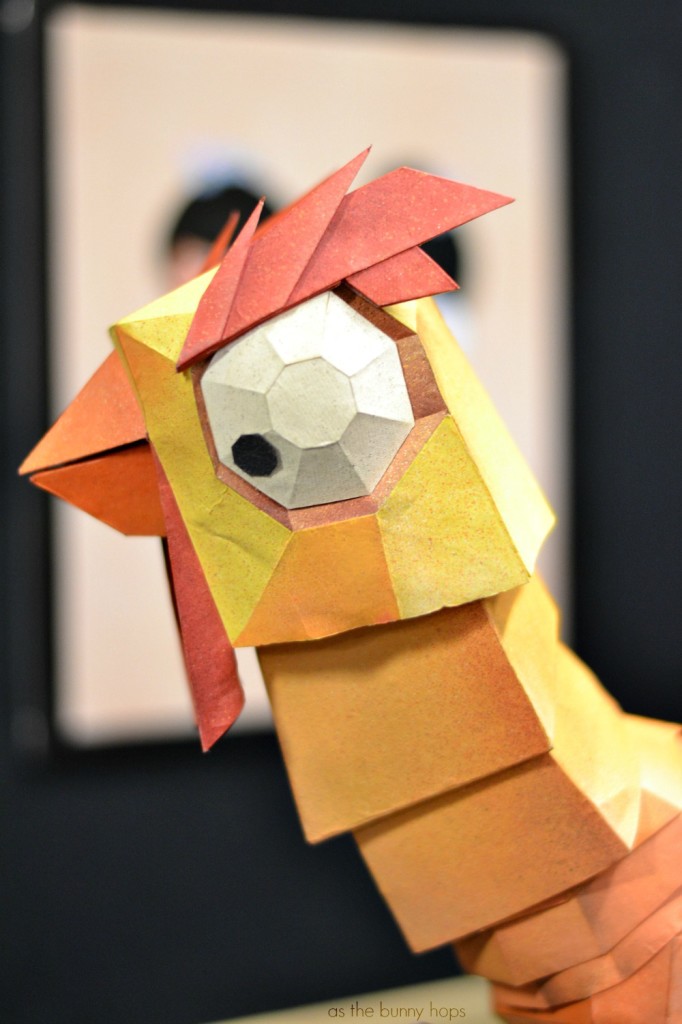 The origami creations for Kubo and the Two Strings created their own specific challenges. The team replicated the appearance of paper by using Tyvek. (The same thing used for house wrap!) They originally attempted to use real paper and quickly found out it wouldn’t stand up to the rigors of the animation process. 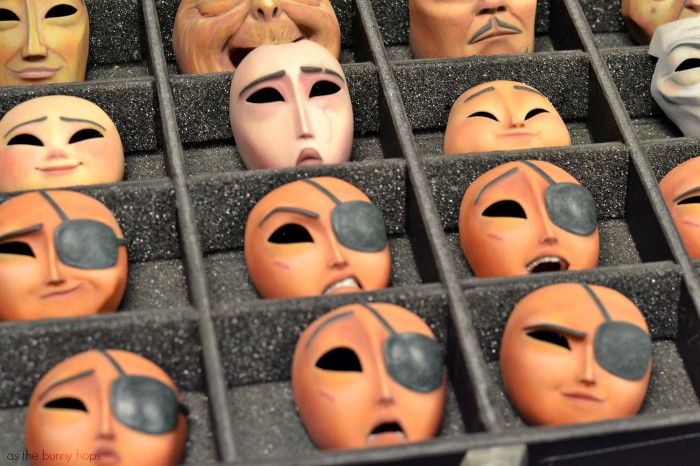 Brian McLean, supervisor of their rapid prototype team, walked us through the process of using 3D printing to create every possible facial expression that might be needed for a puppet. There are even librarians who help organize the pieces and create the trays needed for each day’s animation schedule. 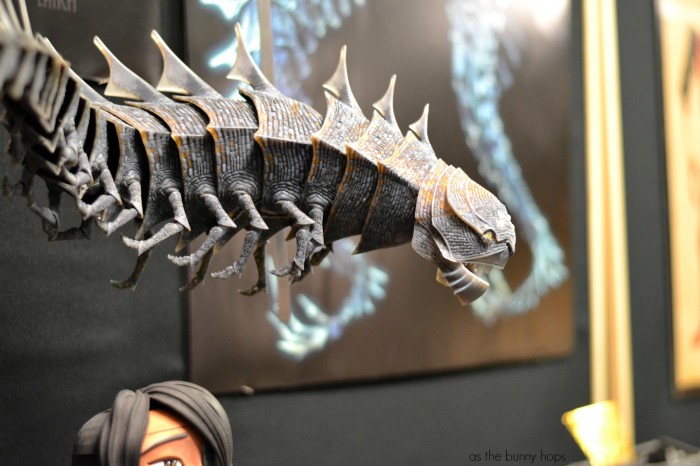 As one of the largest consumers of 3D printing technology, the team at Laika works directly with the companies developing and expanding the 3D printing field to stay on the cutting edge. That allows them to create amazing 3D printed puppets like this guy.

I was able to see a sneak peek of Kubo and the Two Strings  just last week, and watching the puppets that I held in my hands actually come to life on the big screen is something I’ll never forget!

Kubo and the Two Strings will be in theaters on August 19th.