As highlighted in 2016 at the world’s largest toy trade shows, the relatively new toy trend “Design to Play” has produced toys that are so attractively designed, it is a pity to tidy them away. 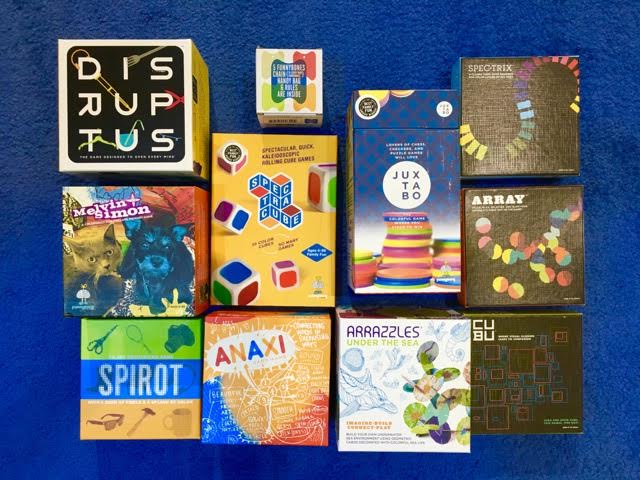 Funnybone Toys launched in 2012 with this focus on games that are fun to play AND to look at – ahead of the trend! – and five years on, offers almost a dozen “Design to Play” games!

Here is an “at a glance” overview of their colorful and fun products!

1. Funnybones game – targeted to natural history and children’s museums. It’s a replication of the ancient game of astrolagos, (Greek for “knucklebones”) – and was a pre-cursor to the modern game of Jacks. (age 6+, $9.99)

2. Arrazzles Under the Sea – targeted to aquariums, art museums located in coastal areas, and children’s museums. It is a building toy where kids 4+ build an underwater world while learning the names of many creatures that live in the ocean. (age 4+, $19.99)

3. Melvin+Simon Collage Memory Game – targeted to children’s museums and art museums that want product for a younger (4+) audience. The game features 24 collage art images that show the adventures of a cat and a dog. Each image is a pair so the child plays a classic game of memory while learning to appreciate the many things that can be seen in a collage. (age 4+, $16.99)

4. Spirot – This “Art Sequencing Game with a Dash of Pixels and Splash of Color” is a game that features pixilated images (3 types of pixel patterns) and colors to make a fun, competitive game. (age 6+, $15.99)

5. Disruptus – The “Game Designed to Open Every Mind” – many museums use this in their education department activities as well as carry it in their stores. Players practice innovation skills of Create, Improve, Transform and Disrupt on everyday objects depicted in 100 cards. (age 10+, $24.99)

6. Juxtabo – A game of vertical dominoes with colors and patterns. Players win pattern cards by finding them or building patterns on an ever-changing board. Our most award-winning game. (age 6+, $29.99)

7. Spectracube – 30 Spectracubes, 15 of one color set and 15 of another color set. The 12 total colors make up the color wheel. The Spectracubes can be used for 6 different games that are all so different (some fast, some turn based, some risky, some requiring an “eagle eye”) that there’s something of interest for everyone. The games also teach players the flow of the color wheel. (age 6+, $21.99)

All of the games also have videos on YouTube.com/funnybonetoys

Tweet
Share
Pin
0 Shares
I Had the Most Unbelievable Night of My Life Walking the Red Carpet! #JungleBookEvent
Why You Need to Vacation at the Iberostar Playa Mita, Mexico!