*I received HABA products in exchange for my review. All my opinions are my own and not swayed by outside sources. *

I always encourage creative play with my kids whenever possible. Of course, they love their tablets and apps, but when I can get them up, active, and using their imaginations, that’s the money. I received a HABA Knight’s Hanging Tent and a MOOVER Wooden Rocking Horse for review, and both of these have been great for encouraging creative play with the kids.

Creative Play is the Best Play

In our digital age of tablets, apps, video games, and all of that other high tech stuff, creative play has fallen by the wayside. Kids today have forgotten how to play using their own creativity. HABA helps them remember. HABA USA has a huge variety of great toys that focus on creativity and imagination rather than the next hot gadget. They take play back to an old school place that I really love.

You see, creative play is the kind of play the actually helps a child be more. More creative. More filled with a sense of wonder. More eager to experience new things. More engaged. With a video game or an app, they’ll have fun. There’s no arguing that. The thing is, they’ll have fun internally – in a world away from where they are in the moment. Creative play allows kids to develop their own stories and worlds while still keeping them firmly grounded in the moment. It allows growth in a way that other play can’t.

My Experience with HABA USA

I received a HABA Knight’s Hanging Tent and a MOOVER Rocking Horse for review, and both of them have gone over with my kids like full size candy bars at Halloween. 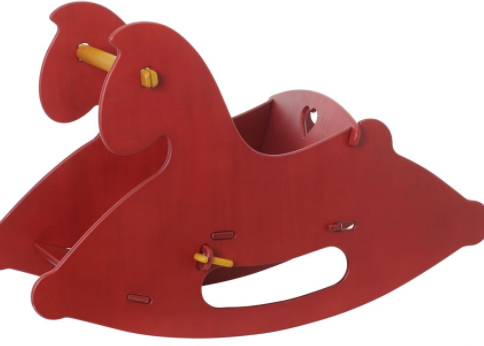 It was less than 5 minutes before my youngest daughter was rocking like a fiend on this adorable little rocking horse. She squealed and babbled excitedly as she rocked. And rocked. And rocked. It was so sweet to watch her giggling as she rode her “horse”. And did she ride it! She was getting after it like she was trying to make the border!

On a normal rocking horse, I would have taken her off when she got that excited. I would have had to sacrifice her creative play for her safety. I don’t have to do that with the MOOVER Rocking Horse. Instead of a traditional rocking horse design, this one has a seat with the horse cutouts on either side, making it look like a horse without the danger of the baby being unsecured. In addition to that, it has a specially designed break curve on the rocker so my little one can’t go to high or knock the rocking horse over.

This one gets a AAA+ for creative play, fun, safety, and peace of mind. 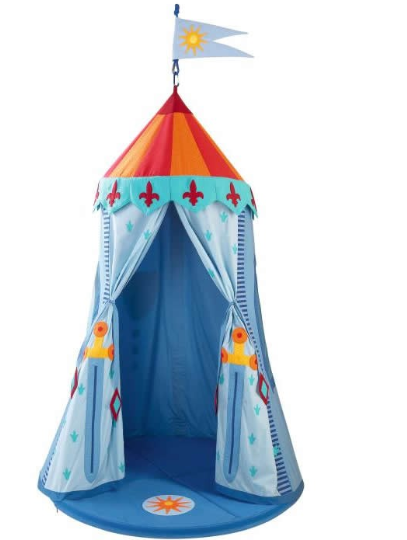 This is one of the best toys I’ve ever gotten my kids for creative play. The HABA Knight’s Hanging Tent is perfect for my 7 year old daughter and my 5 year old son. It’s the kind of setting that they can both play with together, which makes it perfect for creative play AND sibling bonding. It’s a win/ win.

My daughter and son were inside and playing with the tent the second my husband and I were finished setting it up. It was so cute. They played a game that perfectly illustrates my point about creative play. My daughter is obsessed with Frozen. My son. Well, he’s more obsessed with being a hero than a Disney princess. After a couple of minutes, they decided on a game where my daughter would be Elsa, my son would be a knight, and they would both have to help each other vanquish a dragon controlled by Prince Hans. It was the most adorable game I’ve ever seen them play.

Creative play is the best play. It encourages real growth in a child’s mind and spirit. I’m a big fan! I’m also a big fan of the toys and accessories from HABA USA. I’ve never been more happy than when I watched my youngest try to rock her way to the Rio Grande or watched my son and daughter fight the Frozen hoards as partners.

That’s the beauty of creative play, and it only gets better with the fantastic toys from HABA. With everything from dragons and fairies to outdoor swings, HABA has the toys to make creative play the best play you’re kids have ever participated in. Check them out!