*I work with Disney on DVD reviews. All my opinions are my own and not swayed by outside sources. *

Sheriff Callie is a new television to me but apparently not new to my kids. When they heard we were getting this DVD, they jumped for joy because they love Sheriff Callie! The all new Sheriff Callie’s Wild West: Howdy Partner is now available on DVD! 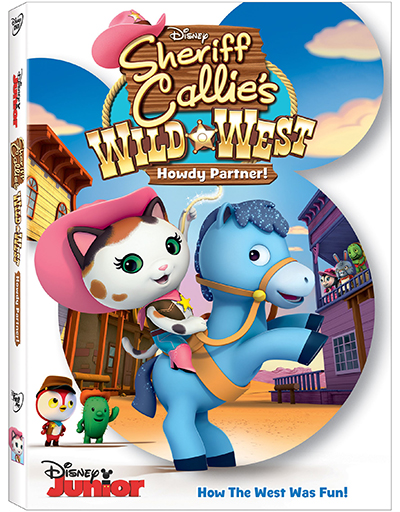 Synopsis: Welcome to “Nice and Friendly Corners,” where lovable Calico cat Sheriff Callie (voiced by Mandy Moore), along with her deputy woodpecker Peck and their fun-loving cactus sidekick Toby, watch over their pleasant little frontier town, ensuring that everyone follows the “Cowpoke Code” of fairness, honesty, hospitality, cooperation and hard work. Utilizing the folklore of the Old West to impart lessons about good morals, manners and social ethics for kids age 2-7, “Sheriff Callie’s Wild West” is the perfect mix of good ol’ friendship and laughter for your little one.

This is a really cute DVD and one you need to add to your kids DVD collection. Be sure to pick it up TODAY!