*This is a sponsored post with Spooksville. All my opinions are my own and not swayed by outside sources.* 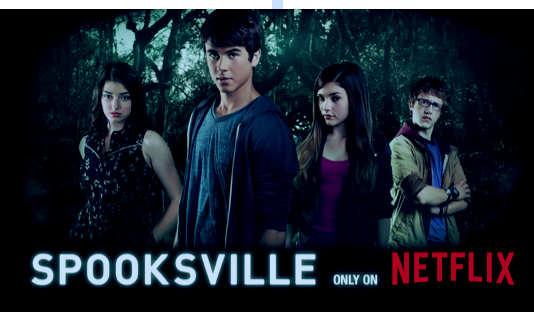 Fans of “Spooksville,” look to start an uproar by sending physical keys and letters to the Netflix office in Beverly Hills in order to unlock the “Spooksville” spell and have Netflix renew the television series for a second season.

The key to unlocking the “Spooksville” spell and having Netflix renew the series for a second season includes strong fan and parental support. Fans and parents must send a key and letter to the Netflix office with a statement explaining why they believe there should be a second season of “Spooksville.”

In addition to sending a physical key and letter to the Netflix office, fans are encouraged to watch Season One on Netflix today as well as share, post, repost, tweet, and re-tweet messages revolving around unlocking the “Spooksville” spell and renewing the second season, which will end on Halloween 10/31/2015.

My name is Morgan Taylor Campbell and I play Ann Templeton in “Spooksville.” I must start by saying how grateful I am that our show is on a network I hold in high regard and I feel Spooks, which in my own mind I think of as “The Little Show That Should,” will stand a chance to be as great as its stories deserve with the incredible support of Netflix backing it. I am so proud that our series shares a home with what I feel are North America’s best television shows. “House of Cards,” “Bloodline,” and “Orange Is The New Black.”

Then I watch a show as visually captivating as Hemlock Grove and think, “My God! This is what they could do with Spooksville!” (Only geared toward a younger audience of course).

In preparation for my role as Ann, I read the “Spooksville” novels by Christopher Pike and admired the empathy and honesty he had when writing the lives of a group of youngsters. As I read, it was the first time in my life I had the desire to pass something down to the children I may one day have and read them to my kids as my parents read to me. However, in the meantime, my copies reside in the hands of my two youngest siblings! My hope is that our show can expand Mr. Pike’s stories to a much wider audience while maintaining the truth and morals held within his individual characters to ultimately serve as powerful role models for the young people watching and perhaps remind the adult viewers of the magic of youth which never has to be forgotten. It was through reading Pike’s novels that I rediscovered my love of children’s stories and the sense of curiosity and individuality, that his specifically inspire, which I had so strongly tried to run from in my teen years.

I was thrilled to be given the opportunity to work on a show that I would have loved to watch while I was growing into my own. As well, one that I could support my younger siblings and cousins watching that is geared to a younger audience yet holds dearly the fact that children are intelligent and can be rather privy to the human condition. For me a good script elicits a strong physiological response and the original drafts of the episodes would take me from cackling in hilarity to the hair on my arms standing on edge as I could not take my eyes off the page in fear of what could happen next. Following the adrenaline filled ride I would be taken on, there are the heart warming moments where my feet feel the ground again, I am reminded of my humanity and that bit of lost, rambunctious space in my heart, that I notice many people hold, eases.

Now, I must be bold as I continue, but I feel it very necessary in order to truthfully answer, “Well, why Netflix?” From the shows I watch on Netflix compared to many other networks, especially ones geared toward kids, I believe our writers will be able to maintain the freedom and unique beauty of their original drafts that in Season One were not always able to make it past the editing room into the colored pages causing some of our magic to be lost. One these magical components that didn’t always make it were moments that make you jump or do a double take when you look in the corner of your bedroom at night. Our show is supposed to be spooky. It is exciting and thrilling and part of the magic of entertainment. I remember lots of kid’s shows that did that for me back in the 90s but where have they gone? And where have all the relatable children’s characters gone? That is a big part of why I love the characters in Spooks. They each hold so much fun, personal quirks and ‘isms’ in their behaviors but also expose very human moments of pain. For instance, of the four primary characters only one of them, Sally, has parents who are still together, which is a direct reflection of most families in our current society. Or there is Watch, who is on the Autism Spectrum and deals with a lack of understanding of social norms. This is a truth I personally have experience with in regards to my own family and it deserves to be talked about on television, especially to kids. On top of this, there are huge themes of friendship and loyalty within our three protagonists, which I feel is a major importance of our show. The stories do not focus around drama and judgments within the group, instead it is a solid troop of friends who protect each other when uncontrollable worldly circumstances are set on their path. Despite the cards dealt to these adolescents in their childhoods, Adam, Watch, Sally and Ann have all overcome personal demons and are on a pursuit to create their own adventures and mishaps and lessons that all people deserve to discover while finding individuality and honesty in themselves.

As I come to a close, I ask that you please accept this key as a token of my support to unlock Spooksville with all the beauty and magic it holds.

Based on the book series by acclaimed author Christopher Pike, “Spooksville” follows the new kid in town who discovers that he holds the key to a battle between good and evil that has been taking place for centuries in a bizarre small town that plays host to a wide array of supernatural and unexplained occurrences.

“Spooksville” is a Daytime Emmy Award-winning series and recipient of the Parents’ Choice Approved Seal. “Spooksville” is produced by Springville Productions, Front Street Pictures (“R.L. Stine’s The Haunting Hour”) and Jane Startz Productions (“The School for Good and Evil”).