The Providence Performing Arts Center is having another fabulous Broadway touring show coming Feb 25- March 2, 2014- Peter and The Starcatcher! 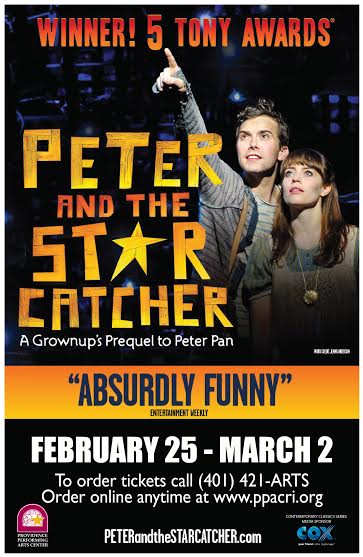 The producers of PETER AND THE STARCATCHER, the five-time Tony Award®–winning musical play written by Tony Award® nominee Rick Elice and directed by Tony® Award winner Roger Rees and Tony® Award nominee Alex Timbers, are pleased to announce casting for the National Tour, which will be at the Providence Performing Arts Center (PPAC) February 25 – March 2, 2014.

The Wednesday, February 26, 2014 performance of PETER AND THE STARCATCHER at  7PM is Family Night on Broadway. With the purchase of a regularly-priced ticket, receive a FREE ticket for a child eighteen-years-old or younger (please note: Golden Circle is excluded).
PETER AND THE STARCATCHER is part of the Contemporary Classics Series. Cox is the media sponsor of PPAC’s 2013/2014 Contemporary Classics Series. 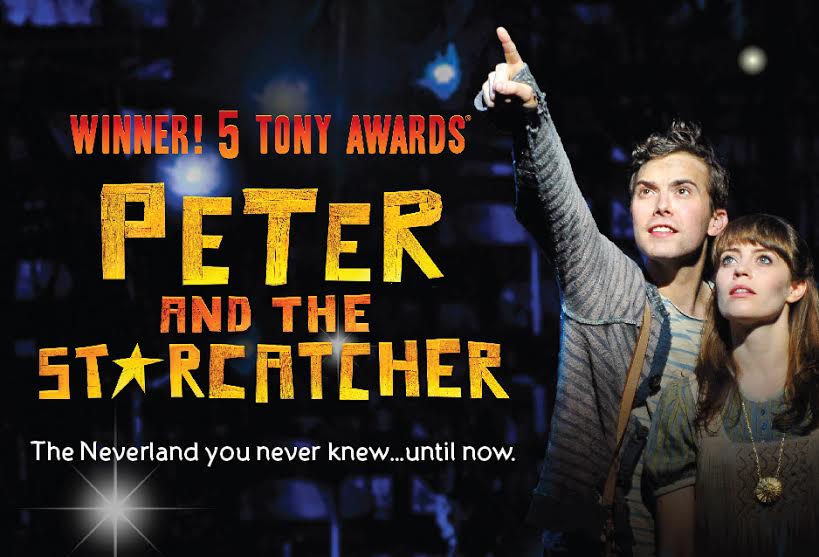 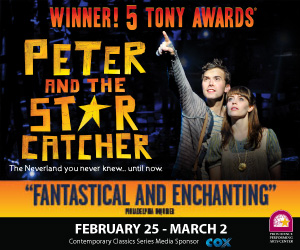 In the spirit of the PETER AND THE STARCATCHER Tony Award®–winning sustainable set design, the producers invited the venues on the tour route to contribute reusable items to help build the tour proscenium. Denver sent in Coors bottle caps, Seattle collected wine corks from the bars at their theater and Dallas arranged a special collection drive at Klyde Warren Park to collect items.

PETER AND THE STARCATCHER, a grown up’s prequel to Peter Pan, is the innovative and imaginative musical play based on the best‐selling novel by Dave Barry and Ridley Pearson. A company of a dozen actors play more than a hundred unforgettable characters, all on a journey to answer the century‐old question: How did Peter Pan become The Boy Who Never Grew Up? This epic origin story of popular culture’s most enduring and beloved character proves that your imagination is the most captivating place in the world.

PETER AND THE STARCATCHER won five 2012 Tony Awards® (the most of any play of the 2011-2012 season) and was named one of The New York Times, New York Magazine and The New Yorker’s Top 10 Shows of the Year.

The New York Times hails PETER AND THE STARCATCHER as “the most exhilarating storytelling on Broadway in decades,” New York Post exclaims it is “the gold standard of Peter Pan shows,” and Entertainment Weekly calls the show “an absurdly funny fantastical journey.”

PETER AND THE STARCATCHER is suitable for younger audiences but most enjoyable for those 10 and up.

Additional show information can be found at  www.peterandthestarcatcher.com

Tickets for PETER AND THE STARCATCHER are $69 – $32; all ticket prices include a $3 per ticket restoration charge and are subject to change without notice. Tickets are available at  the PPACRI.org.

Win it: One winner will receive a 4 pack for the Thursday Feb 27 show at 7:30 PM. For this giveaway, tell me why you want to see this show and who you want to bring in the comment section proceeding the post. For an additional +2 entries, tweet about this giveaway mentioning @dentistmel and @PPACRI. Winner chosen on Feb 21 at 9 AM by random.org. Good luck!

*I received tickets in exchange for this post. All my opinions are my own and not swayed by outside sources.*

The Big Surprise Gender Reveal (funny) and It’s a ……
Natural Area Rugs for our Mudroom!