I am beyond excited for next week because the Tennis Hall of Fame Championship will be held in Newport, RI from July 8-July 14! I am a huge tennis fan and I like not to only play tennis, but watch live tennis! There is nothing quite as enjoyable as watching a good tennis match!

All eyes in the tennis world are on the grass courts of Wimbledon at the moment, but when that tournament concludes this weekend, some of the top players on the ATP World Tour will pack up their tennis bags and head to Newport, Rhode Island for Hall of Fame Tennis Championships, the only pro tournament played on grass courts in North America, which will be hosted July 8 – 14, 2013 at the International Tennis Hall of Fame. 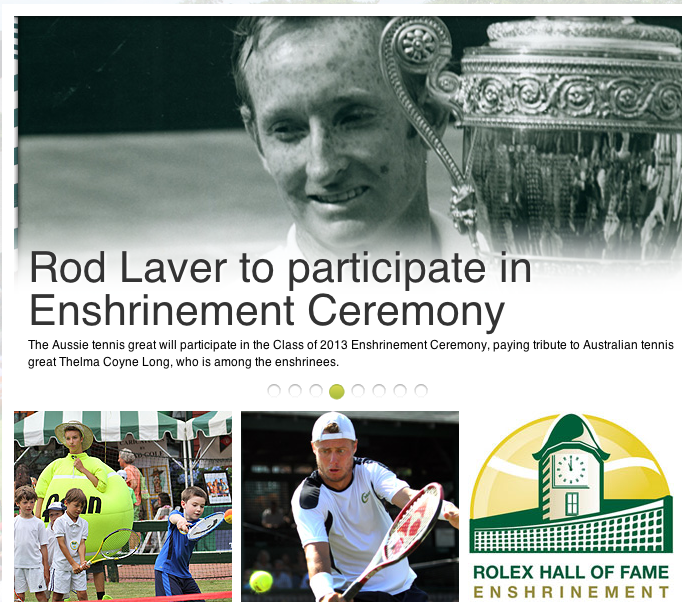 Off the courts, great special events including tennis clinics for kids and adults, a military appreciation day, and an exclusive appearance by Billie Jean King to commemorate the 40th anniversary of the Battle of the Sexes complement the action and make if fun for the whole family! 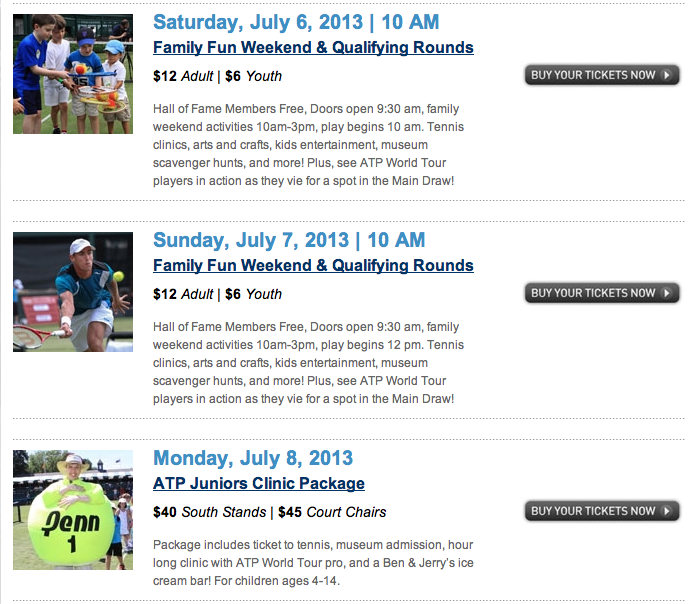 Topping it all off will be the annual Hall of Fame Enshrinement Ceremony on July 13, in which the highest honor in tennis – induction to the International Tennis Hall of Fame, will be presented to former world No. 1 Martina Hingis, tennis industry leaders Cliff Drysdale, Charlie Pasarell, and Ion Tiriac, and Australian tennis great Thelma Coyne Long, who won’t be able to attend, but will have the legendary Rod Laver in Newport, accepting on her behalf.  The weekend will also offer a rare chance to see tennis legends Martina Hingis, Mary Pierce, Stan Smith, and Todd Martin, back in action in the Hall of Fame Exhibition Match on Sunday, July 14 Tickets for the tournament and all special events range from $25 – $85, depending on the day and seat location, and are available now on HallofFameTennisChampionships.com or by calling 401-849-6053.

Here is the full schedule of events: 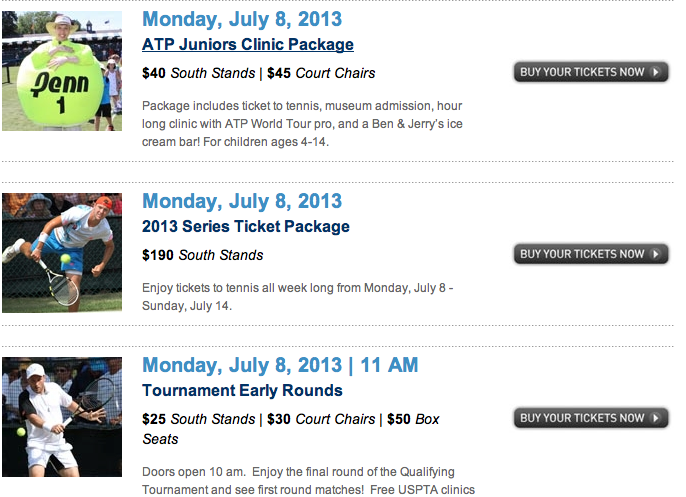 Festivities begin on July 6 – 7 with Family Weekend and Qualifying Rounds a kick-off event for the Hall of Fame Tennis Championships that features activities for all ages in the International Tennis Hall of Fame & Museum and on the historic grass tennis courts from 10 a.m. – 3 p.m., as well as the opportunity to see pro tennis action up close as players compete for the remaining spots in the main draw. A highlight of the event will be a special appearance by Angelo and Ettore Rossetti, the dynamic duo who set the Guinness World Record for the longest tennis rally ever – 24,944 strokes over 14 and a half hours! The Rossetti’s will host a special presentation for kids at 11 a.m. each day, focused on the importance of goal-setting and believing in one’s dreams, followed by a tennis clinic at 12 p.m. each day. Also on the grass courts, kids are invited to try a hand at 10 & Under Tennis a USTA developed program that uses special equipment to introduce the game to kids ages 4 – 10, and Junior Tennis Clinics designed for ages 8 – 16, to be led by Hall of Fame Tennis Club professionals. Reservations are requested for tennis clinics and may be made by calling 401-849-6053. Juniors participating in tennis clinics should wear regular sneakers, shorts, and a comfortable shirt. Inside the International Tennis Hall of Fame & Museum, activities will include Museum tours, scavenger hunts, face-painting, Wii tennis, tennis-themed crafts, and dress up with photos in old-fashion tennis costumes. 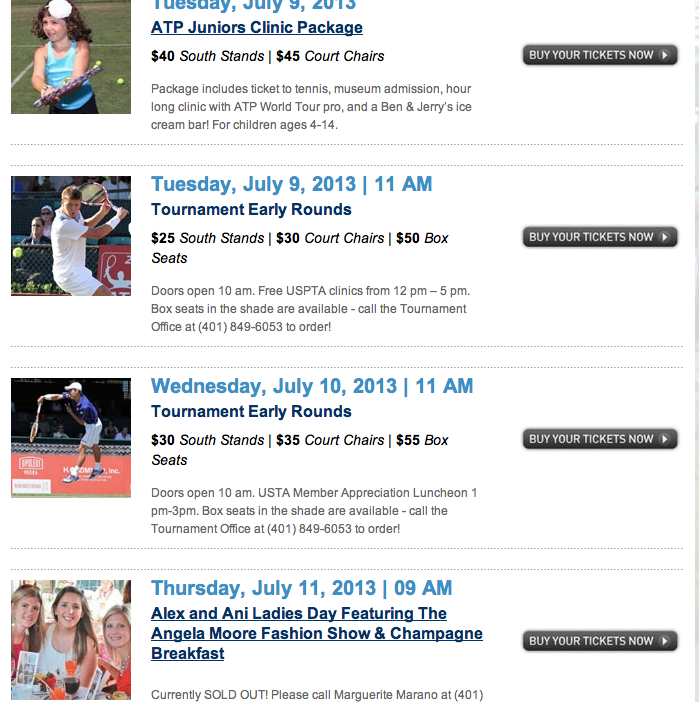 Simultaneously to the Family Weekend activities, pro tennis players from around the world will take to the legendary grass courts for the Qualifying Tournament, when they vie for a playing spot in the Hall of Fame Tennis Championships. The two-day tournament offers a great chance to see world-class pro tennis action up close! Play begins at 10 a.m. on Saturday, July 6 and 12 p.m. on Sunday, July 7. Admission to Family Weekend and the Qualifying Tournament is $6 for children and $12 for adults, and free for Hall of Fame Members. Tickets may be purchased at the door, or in advance by calling 401-849-6053 or on HallofFameTennisChampionships.com. This will be a great family activity to do over the weekend, so be sure not to miss this! 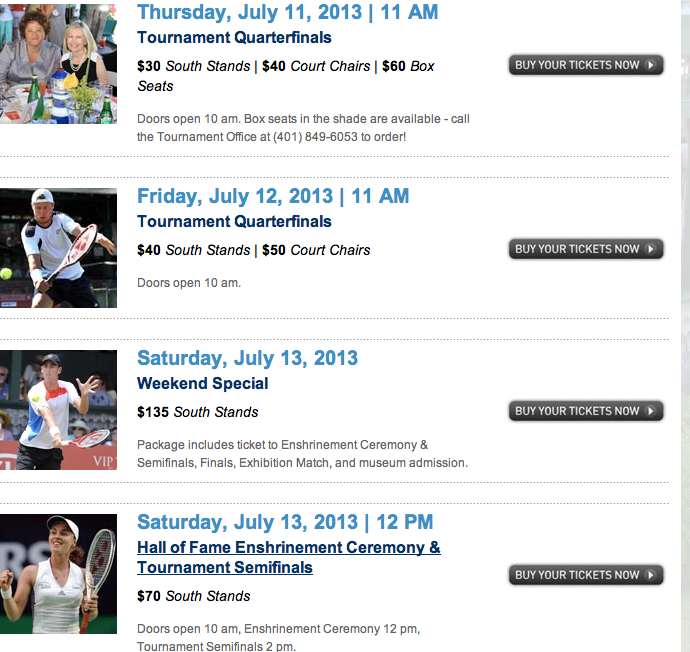 There’s more great tennis opportunities for aspiring junior tennis players on Monday, July 8 and Tuesday, July 9, when the tournament will host Kids Tennis Clinics led by ATP World Tour Pros! An exclusive chance to learn from the best of the best- what a treat for a young tennis player! Kids clinics include one-hour clinic with an ATP World Tour pro, admission to the museum with a fun scavenger hunt, a ticket to watch tennis all day, and an ice cream treat. Tickets are $40-$45, and availability is limited to allow for a great playing experience for all. Open to juniors ages 12 and under. Tickets may be purchased by calling 401-849-6053 or on HallofFameTennisChampionships.com. 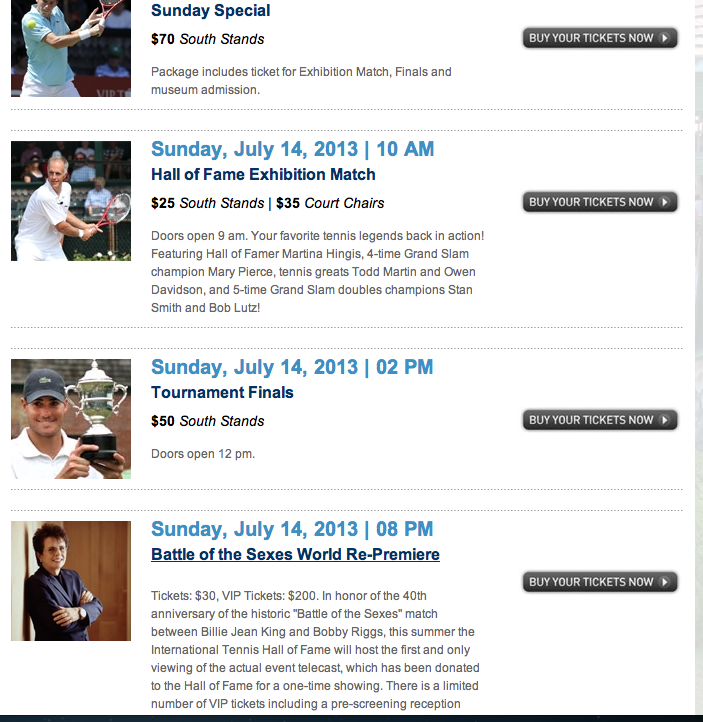 The opportunity to play on the grass courts isn’t limited only to the kids though! Also on Monday, July 8 and Tuesday, July 9, teaching professionals from the United States Professional Tennis Association will offer free tennis lessons for ticketed tournament guests on the Hall of Fame grass courts. Lessons will be on a first-come, first-served basis. A new lesson will begin every 30 minutes and groups will be coordinated by age. Tennis shoes are required.

Monday, July 8 is also Kia Motors Day at the Hall of Fame Tennis Championships, featuring center court promotions and prizes, including the “Fan of the Day” contest. Kia drivers can stop by the Kia booth at the tournament and show their Kia key for a special gift.

If all the action on court has fans craving a little tennis of their own, the Fidelity and Tennis.com Evaluate Your Serve Court will be just the place to visit. From Wednesday, July 10 – Sunday, July 14, the Fidelity and Tennis.com Serve Analysis Court offers tennis players a chance to test out their serve speed and skill, with video analysis and a free online video lesson, compliments of Fidelity.

Friday, July 12 will be Military Appreciation Day at the tournament. Tickets for all active duty military, veterans, and their families will be half-price – just $20, rather than $40. Tickets include access to all four quarterfinal matches scheduled to be played that day. In addition, between the four matches, the tournament will host a Center Court Salute to the Armed Services, paying tribute to all branches of the service.

On the weekend, tennis legends will gather in Newport to celebrate the Rolex Hall of Fame Enshrinement Weekend, honoring the Class of 2013. In recognition of their great accomplishments and contributions to the sport, the honor of Hall of Fame enshrinement will be presented to former world No. 1 Martina Hingis, Australian tennis legend Thelma Coyne Long, and three influential tennis industry leaders Cliff Drysdale, Charlie Pasarell, and Ion Tiriac. The Hall of Fame Enshrinement Ceremony will be held on Saturday, July 13 at 12 p.m. Tickets to be part of this exciting moment in tennis history are $70 – $85, and include both the ceremony and the tournament’s semifinal matches. Tickets may be purchased on HallofFameTennisChampionships.com or by calling 401-849-6053.

The Hall of Fame Weekend festivities will continue on Sunday, July 14 with an exhibition match featuring tennis legends back in action and a rare opportunity to dine and chat with tennis legends at the Brooks Brothers Lunch with Legends.

On Sunday, July 14 at 10 a.m. fans will have the chance to see new Hall of Famer and 15-time champion Martina Hingis back in action once again when she takes to the Hall of Fame grass courts for the Hall of Fame Classic Exhibition Match. Also set to compete will be 4-time Grand Slam champion and former WTA star Mary Pierce, as well as former world top-10 great Todd Martin and the legendary Stan Smith. Tickets are $25 – $35 and are available now on HallofFameTennisChampionships.com or by calling 401-849-6053.

After the exhibition, fans are invited to enjoy a luncheon and tennis talk with legendary Hall of Famers in the Brooks Brothers Lunch with Legends. Hall of Famers from a variety of backgrounds including athletes, journalists and administrators will join fans for a luncheon and to share some of their favorite tennis stories, discuss current news of the game, and take questions from the audience. The luncheon begins at 12 pm. Tickets are $85 and are available now on HallofFameTennisChampionships.com or by calling 401-849-6053.

Several options for special Weekend Ticket Packages including tickets for the Enshrinement Ceremony, Exhibition Match, Brooks Brothers Lunch with Legends, and the Hall of Fame Tennis Championships Finals are available for $70 – $185.

Topping off the whole weekend, Hall of Famer Billie Jean King will be in Newport on Sunday, July 14 for a one-time only re-premiere of the original match footage of the Battle of the Sexes, the historic match between King and Bobby Riggs, which took place 40 years ago this year. Riggs, of course was convinced there was no way a female player, even one of the world’s best, could defeat a man on the tennis court. The packed stadium held more than 30,000 eager fans and millions more tuned in from home to see the dramatic Battle of the Sexes unfold live on ABC Sports. King handily defeated Riggs in straight sets (6-4, 6-3, 6-3), successfully earning respect and awareness for gender equality in the United States, and forging professional tennis into the worldwide spotlight.

This screening will be hosted in the Casino Theatre at the International Tennis Hall of Fame at 8 pm on Sunday, July 14. Tickets are $30, or $200 for a pre-show cocktail party with Billie Jean King, and are available now on HallofFameTennisChampionships.com or by calling 401-849-6053.

In addition to the opportunity to experience the great moments of the iconic match on the big screen, guests will enjoy the unique experience of listening to commentary from Billie Jean King in person as she re-lives the history-making event. King will introduce the broadcast footage, and then discuss her memories of key moments in the match, what the match meant to her personally, and reflect on its lasting impact on gender equality in the world as a whole, and in the sports community. Hall of Famer Rosie Casals, who was an on-air commentator for the event, will be on-hand as well to discuss her memories of the match, how it changed the landscape for opinions about women in sports, but more importantly, was a step in the right direction for gender equality overall.

For additional information about the Hall of Fame Tennis Championships and the many special events throughout the week, please call the Tournament Office at 401-849-6053 or visit www.HallofFameTennisChampionships.com.

I know there is just about something for every fan of tennis going on next week! Believe me, when I tell you that you do not want to miss this! It will be the event of the season. Aside from watching great tennis, you will be getting the beautiful scenery of Newport, right before your eyes! Check out HallofTennisChampionShips.com to purchase your tickets today!

Win it: One winner will receive a 4 pack to watch any of the tennis matches at The Tennis Hall of Fame next weekend from July 8-12. This giveaway is run via rafflecopter so be sure to fill it out. The only mandatory entry is to tell me who is your favorite professional tennis player in the comment section proceeding the post. While the the other entries are optional, I highly suggest filling it out to increase your chances of winning. Winner selected on Sunday July 7!

Tweet
Share
Pin
0 Shares
Happy 4th of July from my family to all of you!
KidGlove case is great if you have kids-iPhone 4/4S! #KidGlove