We recently were sent the movie This is 40 for review. We have seen it in the theatres so we know just how down-right hilarious this movie really is! I am talking tears down your face from laughing so much! 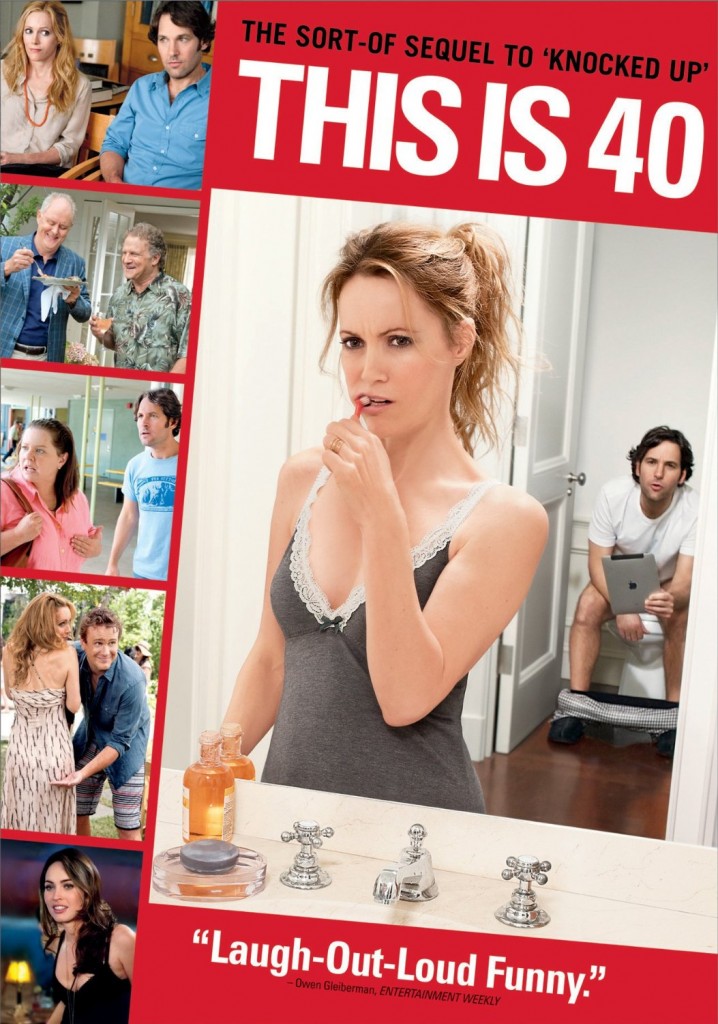 Five years after writer/director Judd Apatow introduced us to Pete and Debbie in Knocked Up, Paul Rudd and Leslie Mann reprise their roles as a husband and wife both approaching a milestone meltdown in This Is 40, an unfiltered, comedic look inside the life of an American family.

After years of marriage, Pete lives in a house of all females: wife Debbie and their two daughters, eight-year-old Charlotte (Iris Apatow) and 13-year-old Sadie (Maude Apatow).  As he struggles to keep his record label afloat, he and Debbie must figure out how to forgive, forget and enjoy the rest of their lives…before they kill each other.

In his fourth directorial outing, Apatow’s new comedy captures what it takes for one family to flourish in the middle of a lifetime together.

What emerges is a deeply honest portrait of the challenges and rewards of marriage and parenthood in the modern age.  Through the filmmaker’s unblinking lens, we follow one couple’s three-week navigation of sex and romance, career triumphs and financial hardships, aging parents and maturing children.

The all-star cast portraying the family and friends, colleagues and neighbors represents an ensemble of actors from many of Apatow’s previous projects, as well as new comedy players who have been welcomed into the fold.  They include John Lithgow, Megan Fox, Chris O’Dowd, Jason Segel, Melissa McCarthy, Graham Parker, Lena Dunham, Annie Mumolo, Robert Smigel, Charlyne Yi, Lisa Darr and Albert Brooks.

My thoughts: We were big fans of Knocked Up, so I was not sure how they would be able to make a movie as good as Knocked Up! We’ll, I was wrong because This is 40 is downright hilarious! My husband and I watched it again this past week, and we were passing around the tissues from tears streaming down our faces. Paul Judd and Melissa McCarthy knocked it out of the water! I was also excited to see my favorite Jason Segel and John Lithgow appear in the movie! It was a wonderful cast all the way around.

This is 40 is a great movie for adults! It does have some unrated and rated R language, so this is not a movie for kids to sit down with you to see. That being said, as parents, we always need a funny movie to escape from reality. This movie did exactly that for us!

Be sure to pick up This is 40 today at your local stores as well as on Amazon! You will be glad you did!

*I received a copy for review. As always, all my opinions are my own and not swayed by outside sources.