One of my favorite things to do with my children is go see the Ringling Brothers and Barnum Bailey Circus. I have been going since I was a little kid, and am excited that I now have the chance to bring my own kids to visit the magic of the circus. 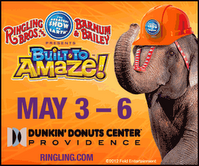 The foundation is set and the rising anticipation of high-energy, high-jinx and hilarity is ready to be transported by colorful circus machinery and unleashed from shipping crates right before the audience’s eyes!  Ringling Bros. and Barnum & Bailey® Presents Built To Amaze!, is an extraordinarily engineered circus experience where Children Of All Ages® find out what it takes to build The Greatest Show On Earth®. 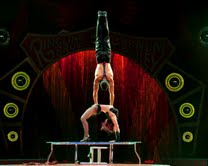 Andre McClain, Ringmaster and America’s favorite cowboy takes the Ringling Bros. reins and accompanied by his horse Comanche, leads his Built To Amaze! funny and mischievous sidekicks, to construct The Greatest Show On Earth.  It also features a fantastic design with more than 110 of the world’s best performers representing 17 countries along with 95 exotic and domestic animals will be assembled, creating never-before-seen heart pounding performances.

Ringling Bros. is thrilled to introduce nine-time international award winning comedic animal presenting duo Alex and Irina Emelin of Russia. Also new to Ringling Bros. is the Tower Tumblers, a troupe of competitive aerial athletes from the Ukraine who launch themselves from trampolines to scale, repel and pass through a three-story high translucent tower.  Ringling Bros. brings a spirited and fiery competition of basketball with the next generation of whirling unicyclists, the legendary King Charles Troupe hailing from New York City!

Be sure to get your tickets now at the Dunkin Donut Center or on Ticketmaster.com!

Here is the schedule for the upcoming Ringling Bros and Barnum Bailey circus at the Dunk:

Win it: One person will win a family four pack to see this upcoming show. Vouchers will be sent and you have to change it in at the Dunkin Donut Center Box Office for whatever date you like to go. To enter, simply leave me a comment and let me know who you want to bring. PLEASE remember to leave a a valid email address. Winner chosen 4/29. Good luck!