Long before I had kids, I always envisioned to run a 5K. You might ask why and the answer is easy- I hate to run, or at least I thought I hated to run! It has been on my bucket list to do a 5K for the past 10 years but every time I went to the sign up page for the race, I wimped out. I kept making excuses not to sign up. I remember one time I was just about to sign up and then I found out a week later, I was pregnant.

Anyway, about two months back, my girlfriend and I were at dinner and she mentioned that I should run a 5K with her in March. After laughing in her ears and telling her there was no way I could do it, I went home that night and signed up. I figured, why not sign up- it is $25 and it goes to a good charity. In my mind, I was not sure if I could ever really run it but the thought of actually paying the money, and signing up, was invigorating.

I decided that I was going to try to run and began my journey to train. We’ll that was all well and good, until we experienced the worst weather in the month of February. Because of the horrible running conditions outside and the lack of a treadmill at home, I knew I was going to be winging it the day of the race. I do know that I am in relatively good shape, as I am a single and doubles tennis player, but running is a whole new sport to me.

This past Saturday was race day. I could not sleep the whole night before as I was nervous! I tossed and turned. I told myself that I really don’t care what my time was, as long as I finished the race. I was beginning to get slightly excited too!

I got to the field where I had to pick up my racing number at 10 Am and the race started at 11Am. I could not believe the excitement in the air and how many people there were getting ready to race- everyone from a 7 year old boy to a 80 year old woman. 11 AM came and I took my place on the start line. I had a bad stomach ache because of nerves but I had it in my mind, that I was going to accomplish it!

Off I went and it seriously was one of the most exciting things I have ever done. People were cheering us from the sidelines and that pushed me to keep running. I had a grin the whole time. It was so exciting! And guess what- I finished the race and finished it in a time of 35 minutes. I am not sure if that is good or bad, but I FINISHED!

It was such an AMAZING day! I got home and signed up for my next 5K! I guess you can say that running grew on me!

Here is the picture I posted on FB after I finished the race: 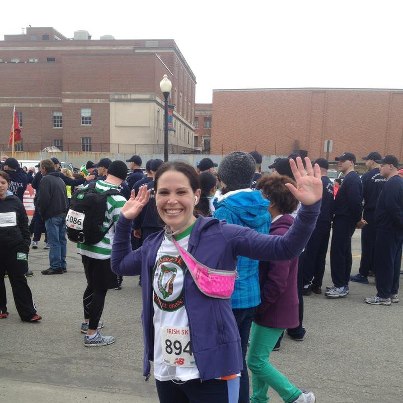