Come celebrate the 60th Anniversary of Disney’s Classic Adventure as it soars to new heights for the first time on Disney Blu-Ray today, February 5, 2013! 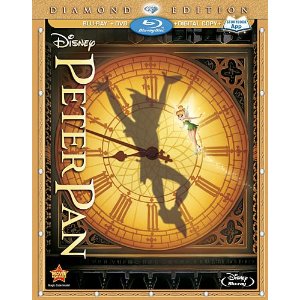 The Walt Disney Studios celebrates the 60th Anniversary release of Walt Disney’s classic, Peter Pan, as it soars to all-new heights with a new digital restoration and high definition picture and sound for the first time ever on Blu-ray. The classic tale that taught us all to believe and first introduced us to the Darling children- Wendy, John, and Michael as they flew with Peter Pan and Tinker Bell past the second star to the right and straight on till morning to the enchanted world of Never Land. Rediscover the magical adventure and relive childhood memories of this great bedtime story!

Peter Pan is a timeless classic from Disney’s Golden Age of animation. The film is one of three to boast all nine of Walt’s famous “Nine Old Men” as Directing Animators, and is a revered audience favorite.  Peter Pan Diamond Edition 3-Disc Blu-ray Combo Pack will be available for the suggested retail price of $44.99 (US) and $51.99(Canada) from Walt Disney Studio.

We received Peter Pan yesterday and we absolutely LOVED it so much, that I had to tell my readers about it today. I remember as a little girl watching Peter Pan with my own mom. Hayley already was a huge fan just by hearing about Peter Pan and Tinkerbell in books. While I knew she would like it, what I did not expect was for her to tell me at least 5 times during the movie that it was her favorite movie ever! She kept turning to me and telling me, “Mom, this movie is so good… Mom, look it is Neverland.. look Mom it is Captain Hook… Look Mom, see Tinkerbell.”  Her excitement was through the roof. Peter Pan is truly a must see for kids of all ages! The Storybook app that is included with the DVD is amazing too! Be sure to buy Peter Pan Diamond Edition today before it gets returned to the vault.

To get you excited for today’s release, I have included some fun party kit activities for your children to do: 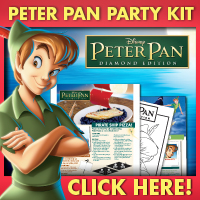