Although I have not personally seen this film yet, I heard it is simply amazing. I have a friend who went to a screening and she loved it from the time it started to the time it ended. It opens tomorrow- 12/21!! 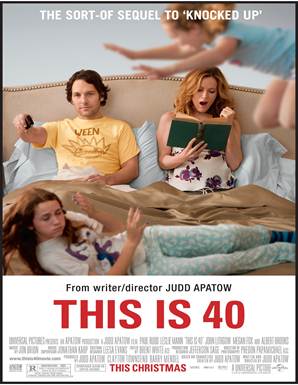 Five years after writer/director Judd Apatow introduced us to Pete and Debbie in Knocked Up, Paul Rudd and Leslie Mann reprise their roles as a husband and wife both approaching a milestone meltdown in This Is 40, an unfiltered, comedic look inside the life of an American family.

After years of marriage, Pete lives in a house of all females: wife Debbie and their two daughters, eight-year-old Charlotte (Iris Apatow) and 13-year-old Sadie (Maude Apatow). As he struggles to keep his record label afloat, he and Debbie must figure out how to forgive, forget and enjoy the rest of their lives…before they kill each other.

In his fourth directorial outing, Apatow’s new comedy captures what it takes for one family to flourish in the middle of a lifetime together.

What emerges is a deeply honest portrait of the challenges and rewards of marriage and parenthood in the modern age. Through the filmmaker’s unblinking lens, we follow one couple’s three-week navigation of sex and romance, career triumphs and financial hardships, aging parents and maturing children.

The all-star cast portraying the family and friends, colleagues and neighbors represents an ensemble of actors from many of Apatow’s previous projects, as well as new comedy players who have been welcomed into the fold. They include John Lithgow, Megan Fox, Chris O’Dowd, Jason Segel, Melissa McCarthy, Graham Parker, Lena Dunham, Annie Mumolo, Robert Smigel, Charlyne Yi, Lisa Darr and Albert Brooks.

WhitePages Mailer Review and a $25 Shutterfly Giveaway!
I am a Pull-Ups “First Flush” Ambassador!