I hope you all go see Wreck-It-Ralph this weekend! It looks adorable!

Here are some fun activity sheets to do with your kids! Enjoy. 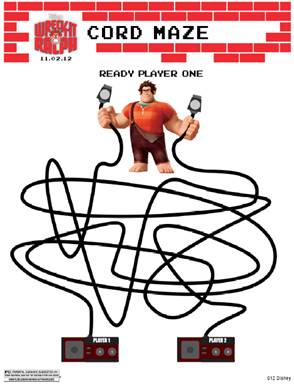 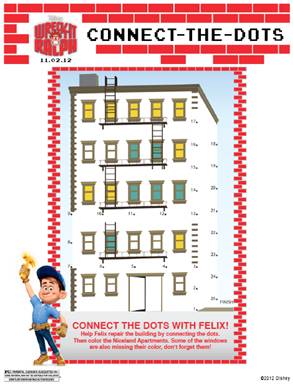 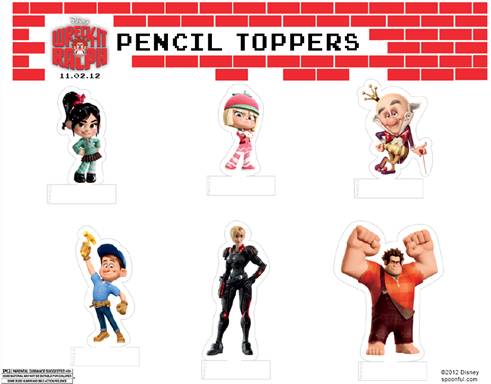 From Walt Disney Animation Studios and Emmy®-winning director Rich Moore comes “Wreck-It Ralph,” a hilarious, arcade-game-hopping adventure. For decades, Ralph (voice of John C. Reilly) has been overshadowed by Fix-It Felix, Jr. (voice of Jack McBrayer), the good-guy star of their game who always gets to save the day. Tired of playing the role of a bad guy, Ralph takes matters into his own massive hands and sets off on a journey across the arcade through multiple generations of video games to prove he’s got what it takes to be a hero.

On his quest, Ralph meets tough-as-nails Sergeant Calhoun (voice of Jane Lynch) from the first-person action game Hero’s Duty, and feisty misfit Vanellope von Schweetz (voice of Sarah Silverman) from the candy-coated cart-racing game Sugar Rush, who may just be his first real friend. But everything changes when a deadly enemy is unleashed, threatening the entire arcade and Vanellope herself. Ralph finally gets his chance to save the day—but can he do it in time? “Wreck-It Ralph” crashes onto the big screen on November 2, 2012, in Disney Digital 3D™ in select theaters.

NOTES:
· John C. Reilly received an Academy Award® nomination for Best Supporting Actor for his role in the musical “Chicago.” He has starred in more than 50 films including “Carnage,” “Talladega Nights: The Ballad of Ricky Bobby,” “The Aviator” and “Step Brothers,” as well as “Walk Hard: The Dewey Cox Story” in which he performed his GRAMMY® Award-nominated song “Walk Hard.”
· For her now iconic role of Sue Sylvester in the television series “Glee,” Jane Lynch won Emmy® and Golden Globe® Awards. She has appeared in numerous films by writer/director Christopher Guest, including “Best in Show” and “A Mighty Wind.”
· Sarah Silverman is an Emmy®-winning actress and comedian who starred in her own Comedy Central show, “The Sarah Silverman Program.” She can be seen in the drama feature “Take This Waltz” and is the author of the New York Times best-seller, “The Bedwetter: Stories of Courage, Redemption and Pee.”
· Jack McBrayer is an Emmy® nominee for portraying Kenneth Parcell on “30 Rock.” His other animated film voice credits include “Despicable Me.” He appeared in “Forgetting Sarah Marshall” and “Talladega Nights: The Ballad of Ricky Bobby,” among other films. He can be seen in “The Campaign” for Warner Bros. and “The To-Do List” for CBS Films.
· “Wreck-It Ralph” features cameos from both classic and modern real-life games. Lending their voices, among others, are Roger Craig Smith (Ezio from franchise “Assassin’s Creed”) as Sonic the Hedgehog, and from “Street Fighter”—Reuben Langdon (“Street Fighter”) as Ken, Kyle Hebert (“Street Fighter”) as Ryu, and Gerald Rivers (“Street Fighter”) as M. Bison.
· Director Rich Moore has won critical acclaim for directing episodes of such cutting edge animated television series as “The Simpsons,” “Futurama” and “Drawn Together.” He won the directing Emmy® Award in the category of Outstanding Animated Program for “Roswell That Ends Well.” He also received an Annie Award for that same episode of “Futurama.” He is an alumnus of CalArts.
· Clark Spencer previously produced the Disney animated hits “Winnie the Pooh,” “Bolt” and “Lilo & Stitch.”

“Wreck-It Ralph” takes moviegoers on a hilarious, arcade-game-hopping journey in which Ralph (voice of John C. Reilly)—tired of being overshadowed by Fix-It Felix, Jr. (voice of Jack McBrayer), the “good guy” star of their game—sets off on a quest to prove he’s got what it takes to be a hero. Also featuring the voices of Jane Lynch and Sarah Silverman, “Wreck-It Ralph” is in theaters Nov. 2, 2012, in Disney Digital 3D™ in select theaters.