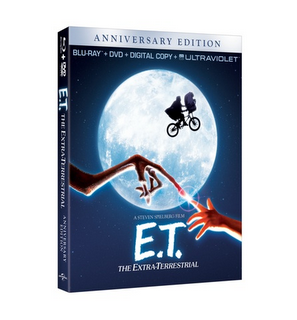 Phone home E.T… Phone home E.T… When I first heard that they were releasing one of the most beloved films of all times to Blu-Ray, I stopped in my tracks. E.T. is a movie I grew up with and loved so much! I was so excited to hear they were digitally remastering it for the 30th Anniversary Edition.  This is one of my favorite movie of all times and a true classic all families should own!

E.T. The Extra-Terrestrial, Academy Award winning director Steven Spielberg’s magical adventure, celebrates its 30th Anniversary with its first-ever release on Blu-Ray October 9, 2012. Featuring an all-new, digitally remastered picture that delivers six times the resolution of DVD, as well as all-new 7.1 surround sound, E.T. The Extra-Terrestrial Anniversary Edition Bl-Ray Combo Pack includes 1982 theatrical movie, all new interview with director Steven Spielberg, and ‘The E.T. Journals” featuring never-before-seen footage from the set of the film. The Blu-Ray Combo Pack also includes UltraViolet, a DVD and a Digital Copy of the film, offering fans a chance to relieve the mystery, laughter, and wonder of the iconic movie anytime, anywhere!

“When E.T. The Extra-Terrestrial premiered in 1982, it captured the imaginations of people young, old, and everyone in between in a way that was unparalleled in modern movie history”, said Craig Kornblau, President of Universal Studios Home Entertainment. “A global cultural phenomenon- and the biggest box-office blockbuster of its day-E.T. brought out the child in all of us.

I love the new E.T.The Exterrestrial DVD look. It has so many exciting extras including deleted scenes from the 2002 version, a look back at the making of E.T., a music discussion with one of my favorite composers, John Williams, extra scenes, the original theatrical trailer and so much more!

Be sure to pick up this wonderful family movie on October 9,2012. It is available for preorder on Amazon now.

If you are anxiously waiting for the release, feel free to check out the below family activites revolving around E.T.