Lady Knight Dora is joined by the legendary Don Quixote in the brand-new DVD, Dora the Explorer: Dora’s Royal Rescue. The DVD includes a double length, never before aired episode, “Dora’s Royal Rescue,” which features the voices of Andy Garcia as Don Quixote and Placido Domingo as Malambruno. Also included, is the all new to DVD episode, “Dora’s Knighthood Adventure,” which features the voice of Garcia as Don Quixote. In addition, for a limited time only, kids can enjoy a free Dora coloring and activity book. Created by Nickelodeon Home Entertainment and distributed by Paramount Home Media Distribution, Dora the Explorer: Dora’s Royal Rescue recently became released for the suggested retail price of $14.99. 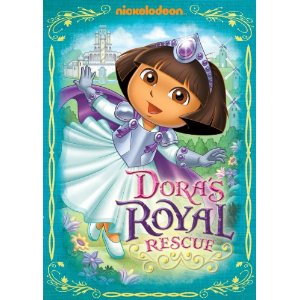 Dora’s Royal Rescue (Double Length Episode)- Join Lady Knight Dora in a double-length adventure, as she and her faithful squire Boots embark on a noble quest to help Rociante the Horst save his knight, Don Quixote (voiced by Andy Garcia), who has been locked in Story Castle by the mean Malambruno (voiced by Placido Domingo)! They must dance past a giant spider and overcome windmills to rescue Don Quixote.

Dora, Boots, Rociante the horse, and Dapple the donkey go on a heroic adventure to rescue a princess so they can become knights just like Don Quixote (voiced by Andy Garcia)

Hayley and Zane both LOVE watching the Dora the Explorer: Dora’s Royal Rescue DVD! Hayley is so into castles and adventures, so she was mesmorized! I highly recommend this DVD.

*I received an advanced copy for review from Nickelodeon. As always, all my opinions are my own and not swayed by outside sources.