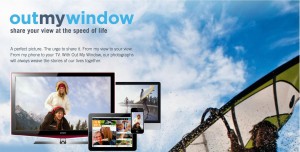 Last week I talked about OutmywindowTM and the new application available by Warner Brothers. It is a photo sharing system that allows one to set up who they want to share their photos with. You can curate a list of who is allowed to see the photos you select to share, as well as, set up different groups of what photos you want to share.

As a mom of two, I am always worried about posting pictures of my children on the web. Conversely I am nervous that my children in the future with share photos that will end up by seeing by people who should not be getting hold of them. I don’t want my personal photos getting in the wrong hands of people who should be restricted from seeing the pictures in the first place.

With OutmywindowTM, it allows secure photo sharing capabilities to help parents teach their children about web privacy. WIth Facebook, Twitter, and Instagram being big photo sharing sites, sometimes, pictures get leaked that could cause harm to ones reputation. By using OutmywindowTM, I know I am helping Hayley learn that the web is not all fun and games.

Just recently, Hayley wanted to share pictures of herself playing in the backyard. In some of the pictures, she had her dress on and some of her underwear was showing. She is 3 so it happens that her dress comes up when she is playing.  They were adorable pictures but there is no way I want a picture of even a snapshot of my daughters underwear showing on the web. We were unable to share this picture, because you never know what type of crazies are out there. However, with OutmywindowTM, I could easily share the adorable pictures with my mom knowing they would never end up on any social media sites. This is a truly fantastic application available on iTunes now!

*”I have been hired by Warner Bros WBWord division to raise awareness for ‘outmywindow™.'”

Getting ready for Football Season with some SNICKERS® Brand NFL Minis #SnickersMinis #Cbias
Do your kids wear school uniforms?