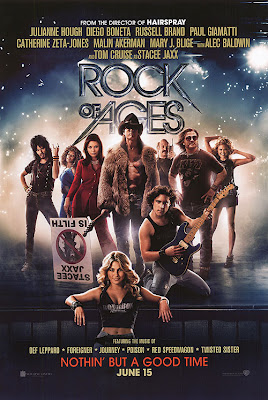 “Rock of Ages” tells the story of small town girl Sherrie and city boy Drew, who meet on the Sunset Strip while pursuing their Hollywood dreams.  Their rock ‘n’ roll romance is told through the heart-pounding hits of Def Leppard, Foreigner, Journey, Poison, REO Speedwagon, Twisted Sister and more.

****I saw an advanced screening of the film this past Tuesday night. I will fully admit that I am a Rock of Ages groupie! I saw it on Broadway twice and also recently saw the touring show in my hometown. When I first heard they were going to make the movie and who they were going to cast, I was slightly confused. Tom Cruise…for real- Can that guy even sing?

Well, the movie was so much more than I ever imagined. I give it a A++++++. I laughed along for a little over two hours and rocked to all the amazing songs of the 80’s. Let me tell you that their rendition of Journey’s “Never stop believing” was the greatest rendition second to Journey singing it. It was AMAZING!!! Rock of Ages, the movie, takes you back to all the incredible hits from some of the best bands of the 80’s- Def. Leopard, Poison, REO, and so much more! From the opening number to the last, I was rocking out in my seat!

Now onto the cast: TOM CRUISE was above incredible- there are really no words to describe his performance. He played the main lead of Stacee Jax who is the main idol of all the 80’s groupies at the time. From seeing it on Broadway, I knew the one who played this role needed to have a fantastic voice and all I kept thinking is how is Tom Cruise going to excel in this role.  However, Tom Cruise blew it out of the water with his singing and his acting. Julianne Hough was good but I think her voice stood to use some improvement. I laughed out loud when Alec Baldwin and Russell Brand did their singing numbers on stage- the two had great chemistry and it showed throughout the movie. I loved that one of my favorite singers, Mary J. Blige, had a role in this film- with that incredible voice, she was a great added lead.

I highly suggest you run to your theatre and check out Rock of Ages. I will fully admit that I am going to see it again this week! LOVED IT!!!!! Be prepared to rock…Be prepared to laugh…Be prepare to sing!

Here is a sneak peak of the trailer:

* I saw an advanced screening of Rock of Ages this past week. All my opinions are my own and not swayed by outside sources.