Over the last year, creative play and games like Dungeons & Dragons (D&D) have made a resurgence, helping players escape a real-life monster – the COVID-19 pandemic.  Not only has Jonathan Hill been using the role-playing game his entire life as an escape from the challenges of his chronic health condition, severe hemophilia A, but he has also channeled his creative energy into writing a new graphic novel.  “Blood of the Paladin” details his journey of accepting, managing and embracing his bleeding disorder. In the graphic novel, he draws support from his father, close friends, and the iconic fantasy role-playing game.  Jonathan is sharing his story through this graphic novel in the hopes of shedding light on the challenges that people living with hemophilia face. 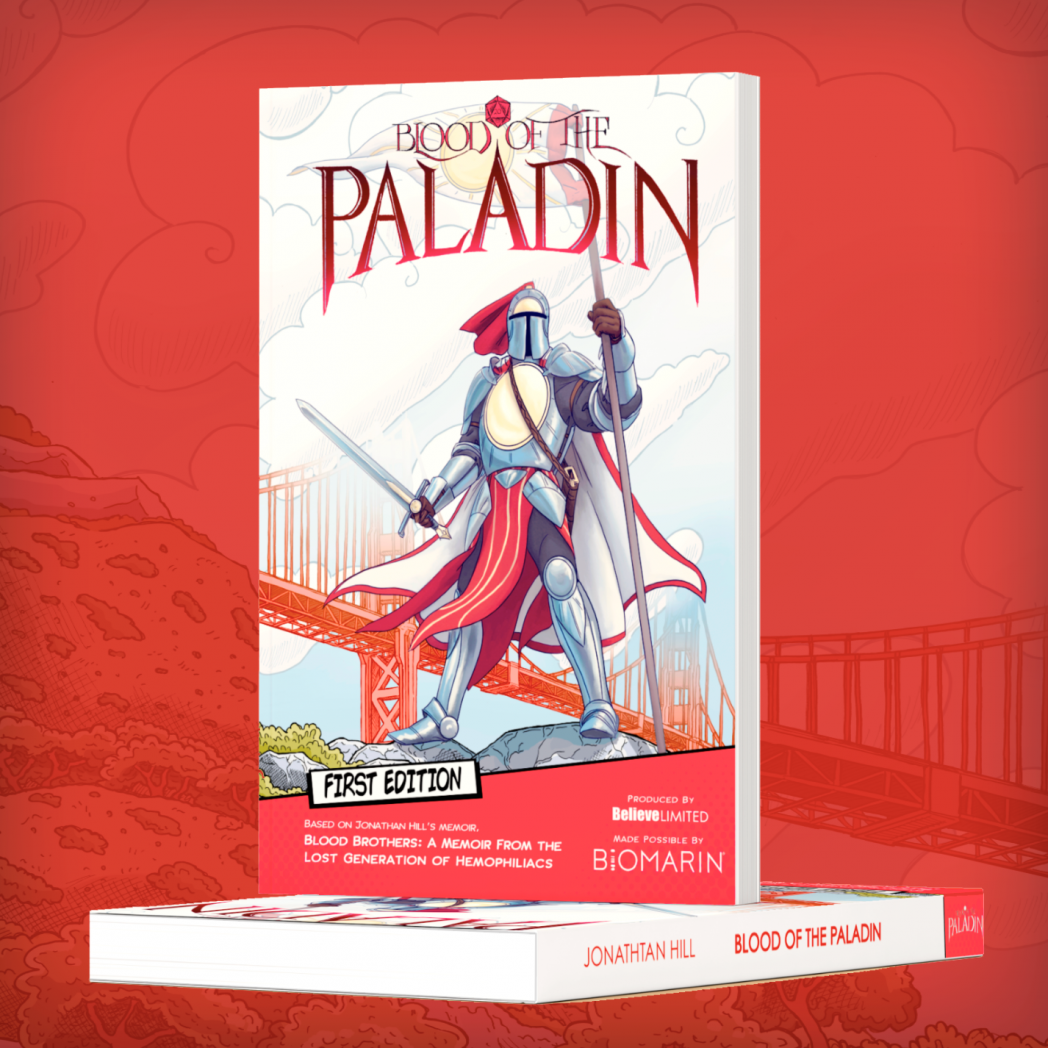 I had the chance to interview Jonathan about his personal experience, the therapeutic process of writing and his work to help others facing similar trials. He was joined by his dear friend and former President of the National Hemophilia Foundation Val Bias, who can discussed with me the challenges that people living with the condition face.

Jonathan Hill was born with severe hemophilia A in 1971. In the 1980s, Jonathan learned that he had been infected with hepatitis C and HIV from contaminated blood products. Later, he developed severe liver disease, undergoing a liver transplant in 2017. For several years before his transplant, Jonathan sought a creative outlet, writing about his experiences on Facebook. The response was huge. Family and friends shared how his posts helped them better identify with the struggles of people with rare diseases. Over time, he compiled his writing into a memoir, “Blood Brothers: A Memoir from the Lost Generation of Hemophiliacs.”  After a meeting at the National Hemophilia Foundation (NHF) 2019 Bleeding Disorders Conference, Jonathan partnered with BioMarin and Believe Limited to create a graphic novel illustrating his journey.

More About Val Bias:
From 2008 through 2019, Val Bias, who also lives with hemophilia, led the National Hemophilia Foundation to the forefront of the healthcare reform debate on such issues as the elimination of lifetime caps and pre-existing conditions with insurers. In addition, he greatly expanded the NHF’s research agenda and created the Women’s Health and Bleeding Disorders Institute to address the growing needs for awareness and treatment for women with bleeding disorders. Before becoming CEO, Bias maintained a long history with the National Hemophilia Foundation from his service as NHF’s Board Chair in 1992 to his tenure as volunteer, consultant, and lobbyist/advocate for NHF – culminating with the passage of the Ricky Ray Hemophilia Relief Act of 1998. He has interfaced with key decision makers in executive and legislative branches of federal government and has long-standing working relationships with such federal agencies as the CDC, NIH and FDA.

Q+A with Jon and Val:

He said he wrote it to capture the history and strength of the bleeding disorder community and the challenges they face on a daily basis, despite all the medical advances.

They met at hemophilia camp. This was a tradition within the hemophilia community and sometimes this was the first time getting acquainted with other kids. They both stayed in touch with a lot of the community that they met there.

The treatments have been getting so much better and they are on the verge of gene therapy. Everyone needs this treatment network that specializes in hemophilia diseases. They are very great with access to care and products. As treatment get better, those centers can diminish which he worries about it.

Val said to develop a toolkit to talk about the experiences that people go through. Do a lot of creative expression. It is important to build a support team and network. Learning how to become your own advocate is also very important.

*I worked with Jonathan and Val on this project. All opinions are my own and not swayed by outside sources.*