I’m a bear in the mornings if I don’t get enough sleep the night before. I learned early on in life that I’m certainly not one of those people who can get a handful of hours of sleep and be fine the next day. In fact, if I don’t get at least 7 hours I’m a useless, cranky mess. There are, however, nights when it just can’t be avoided..nights when I’m all but dead by the time my head hits the pillow after a long day but no matter how hard I try, I just can’t get myself to relax enough to get those precious hours of sleep I require. If this sounds familiar to any of my readers, then I’m sorry to say that you might be suffering from a touch of insomnia.  Don’t worry- Relaxium Sleep is there to help! Helping to get and help staying asleep is so very important. 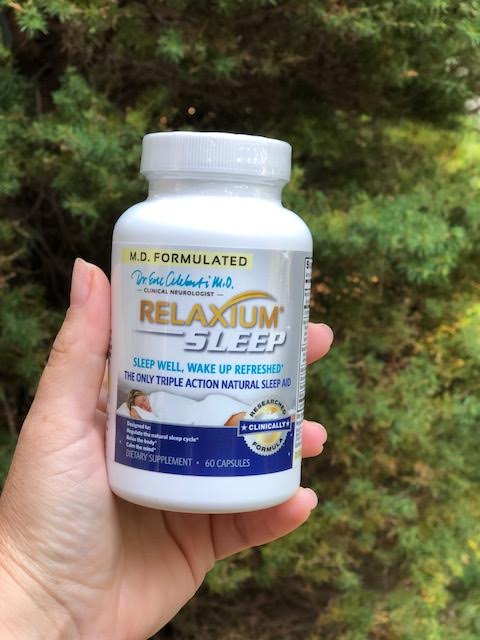 WHY CAN’T I SLEEP-OH MY

It might even be safe to say that you’ve tried a couple of over the counter medications in the past to help catch those zzz’s. If you’re like me,  the money you spent on said medications was probably an epic waste, too! I’ve tried a few different options that either didn’t work at all, that made my groggy in the morning or that I just plain had to quit due to dependency. It was frustrating to say the least! It seemed like I couldn’t win no matter I did..and suffered many sleepless nights because of it all.

At least until I got the chance to test out Relaxium Sleep. After so long of having medications that failed me, I was skeptical about trying something new. I had an inkling that I was in for more disappointment but yet, I figured it wouldn’t hurt to try. With more sleepless nights lately than restful ones, it couldn’t hurt to try one more..or at least that’s what I told myself the first night I gave it a trial run. To say I was surprised was an understatement. In all honesty, I was nothing short of amazed; this stuff did for me what few others had accomplished: it didn’t made me overwhelmingly drowsy, I wasn’t groggy in the morning and I felt like I’d gotten the rest I’d been craving.

HOW TO STAY ASLEEP

Relaxium Sleep is the #1 Doctor recommended sleep aid available on the market today. With so many labels claiming the exact same thing, let me tell you a little bit about WHY Relaxium is the real deal. With a special blend of ingredients such as Melatonin, L-chamomile, Valerian Root, and Ashwagandha, this handy little sleep aid has all of the natural components it needs to promote healthy sleep patterns in its users. Non-habit forming, Relaxium was used in a double blind clinical trial that found 86% of users reported waking up feeling refreshed and having gained a good night sleep.

Benefits of the Relaxium sleep aid include:

I’m not saying take my word for it but if you’re feeling the strain from lack of sleep, I would definitely recommend in investing in a bottle for yourself. It will certainly prove itself if given the chance! To grab your own supply or simply to find out more, you can visit the Relaxium website and take a look around.
Amusement Park Fun at Lake Compounce!
Aysa-Amazing App to help you figure out Skin Conditions!!