**I received an all expense paid trip thanks to Disney. All my opinions are my own and not swayed by outside sources. Photos provided my Louise at MomStart.com.

Have you all seen Moana yet? If not read my review and then head to the theatre! This is a wonderful family film which such unbelievable messages! I honestly can’t wait to see it again (and I have seen in three times so far!) In Moana, Sina (Moana’s mom) is voiced by the fabulous Nicole Scherzinger. You may know her from the Pussy Cat Dolls but what you may not know is how versatile a singer/actress she is! 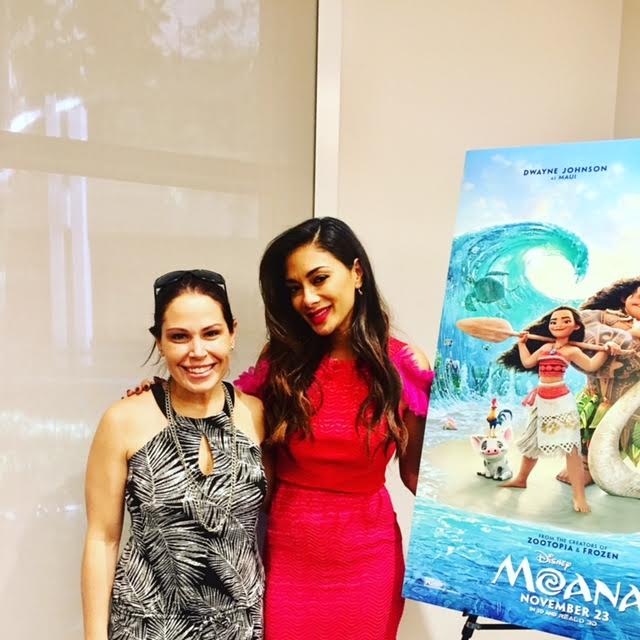 Usually during an interview I get inspired, but truly I never been inspired like I have, during the Nicole Scherzinger interview. She gave new meaning to girl power and the feeling of making sure you do everything in your life, that you are meant to do. She gave me the courage to continue to follow my dreams and to never look back. I really enjoyed talking to her and learning all about her. I hope you enjoy the interview as much as I did that day!

Question 1: Tell us why you wanted to be a part of this project and how it came to be?

“It’s a story of our people. Where we come from. And I’m just so proud that Disney did right by us, by the Polynesian people. And stayed true to our culture, where we come from, our mono, our power, our people, our lifeline and just told a beautiful story about a young girl.”

“It wasn’t a love story, it was a heroine story about a young girl’s journey, which we can all relate to about discovering who we really are and what we’re meant for. What our purpose and our destiny is. And that’s a beautiful story, and then I have the honor of playing Moana’s mother, Sina. And they’re trying to give me some of her lines. It’s very simple but it’s very telling in the lines. And they’re trying to give me the back story. I was like, please, I lived this. I lived with my mother and my tutu, which means grandmother. In our culture, the men are the head of the household, but the women are the backbone. They are everything. They are the strength. They keep it together. And in my family, my tutu had twenty-one births. Of twenty-two births, she ended up raising eighteen children. My mother had ten kids. So my tutu already has like seventy-five grandchildren and great grandchildren combined. So we have a really, really big family at home. So I just felt like I had to be a part of this.”

She then told us she is so excited for this movie because it is so great for girls and boys to look up to someone like Moana, with her being as strong-willed as she is. She told us she loves it.

Question 2:   You have such a huge family. Is everybody still in Hawaii?

“My mom, when she was pregnant with me, she was seventeen, had me when she was eighteen. And she raised me on her own. And then my tutu and papa – that’s from grandmother and grandfather, they helped raise me as well. And then my mother met my father, which is why I got the last name Scherzinger, my adopted last name. She had to move to the states for my tutu and papa – my papa was in the Marines – to help raise me. And then as soon as I grew up and was able to afford it, I would move my mom back home. As soon as I was making some money, I moved my mom back home and so my mom and dad are in Hawaii again next to my tutu and papa because they have to have their kids around them.”

Question 3:    You’ve done a lot of live performances between music and the theater. How is this in comparison?

She told us she wanted to be Whitney Houston-LOL!

“And so from a little girl I always performed live, and I was fortunate enough to go to a performing arts school. And did a lot of theater, and a lot of musical theater. The stage is my favorite place to be, really musical theater is. I just finished doing Cats a year ago in the west and I was supposed to be doing it on Broadway. And I want to go back to the theater when the time is right. But I do love being in the recording studio as well I love touring. Doing this movie was such a new experience for me because I’ve never been an animated character.”

“When you’re acting, you’re acting to not the other actor or the character, you’re acting with another just person giving you the lines. And so you have to just imagine everything, to be so creative in your head. They show you these sketched out drawings of your character in the scene. And everything looks like penciled in. And you just have to kinda of close your eyes and put yourself there and kind of be extra animated. I thought it was hilarious because they had cameras all throughout the whole recording studio because it makes sense.” 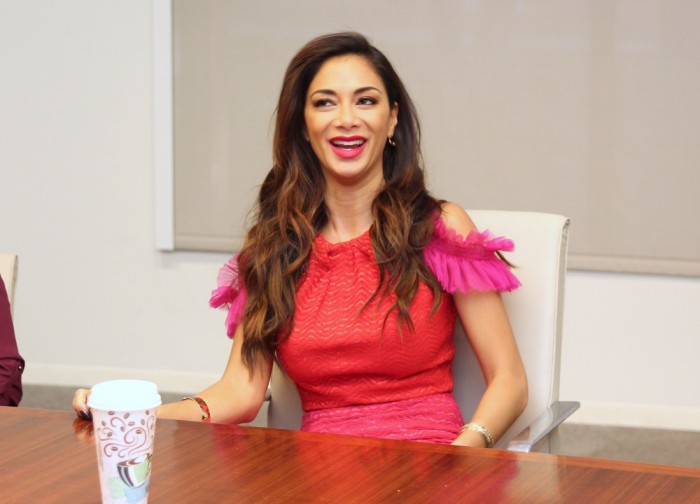 She told us she uses all these different expressions of your face and they try to incorporate it into the character to bring it to life as you. She told us she probably looked crazy when she was doing it. 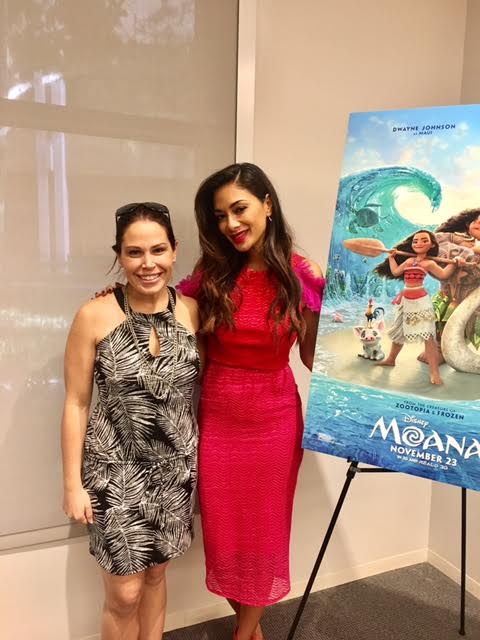 Question 4:    In terms of your character, Sina, was there a certain thing that you brought more into the character from your person self?

“It was interesting because in the script they had a couple different readings, like different ways they wanted to get the story across. Especially the part where she’s trying to explain to her daughter, that you can’t go be on the reef. Trying to explain because your father’s been there and he’s had a great loss and he’s just trying to protect you. And I think I brought some of that to it. First of all, I wish I had the script in front of me but I definitely did draw from personal connection.”

Question 5:    So you mentioned Whitney Houston, and it reminded of your audition tape, way back fifteen years ago. Did you think that starting out back then, do you feel like you are where you should be? Did you ever think that you would be where you are now when you first started out?

“The honest answer to that is no. When I was a little girl I came from nothing, but for some reason I felt like I was meant to be Whitney Houston. Like I wanted to be, not meant to be because no one can replicate her ever, or touch her. I knew I was meant to sing. And it’s interesting, my life has taken different paths. And I don’t regret anything, and I’m very grateful for everything. But last year, it was this exact time last year that I finished my year and I was reflecting and I was like, how do I feel about this year? It’s the first year I ever really put music out. What am I doing? Am I going to make a new album? How can I compete with all these twenty year olds? And everybody’s got the Max Martin singles. What am I doing? And I really thought about it. And I was, I’m really tired of people telling me, you can sing everything. And that’s very confusing. And you do everything. That’s really confusing for people. And I’m like, why can’t I do my own thing? So I decided last year that I was going to create my own show, and do my own album that comes out of it. I don’t wanna talk about it too much, because I’d rather do it.”

“And it’s going to take a lot of time. But to answer your question, I believe we’re all made for a purpose. A great purpose. And I haven’t got there yet. I came up with this because in interviews people are usually like, wow, you’ve done so much. You know, what is there left to do? And I’m like, that’s funny, because I feel like I’m just scratching at the surface and I’m just using, a fraction of my potential.”

“So I’ve got everything left to do. It’s taking that time. It’s carving that time out now for myself to create what I feel like I was made to create. I can’t live, I can’t die with this in me. So I have something that I want to create, a project, and I want to share. That will be my legacy that I want to leave behind. So I’m working on it. And I’m getting there.”

“You grow more confident. You really start to discover who you are. You know, even though Moana is sixteen in the film and is discovering, I’m sure you guys feel like if we really look deep within, we’re still discovering who we are.”

“But we’re still like, who am I? What do I really want? I’m worth this. You know, I’ve got to keep my integrity, my dignity, and this is my self-worth. And I think it’s a constant struggle. That’s what I want to build this project around. It’s my story. And I feel like all women, and all people, can relate. That inner journey, that struggle and that battle of learning and knowing your own self-worth, as a woman.” 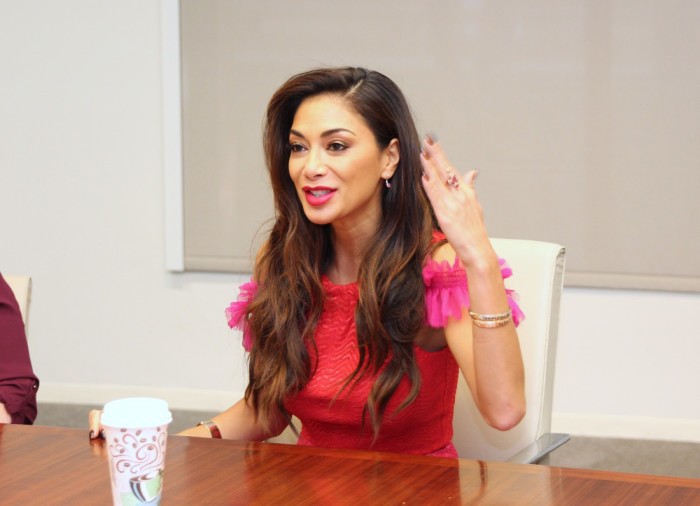 “ Every way, it’s so easy to say, you can’t really be happy with someone until you’re happy with yourself. But how hard is that? You have to look at it and be like this is what led me to be here, let me run and grow from this. But this is where I really see myself and this is where G-d made me. So let me get myself on track and focus and get it together. Because no one else is going to do it for me.”

It was such a moving interview. I felt so good going leaving that interview, knowing I can also make a difference in this world. We all can! What a fantastic interview.