**I received an all expense paid trip thanks to Disney. All my opinions are my own and not swayed by outside sources. Photo credit given by Disney and Louise from MomStart* 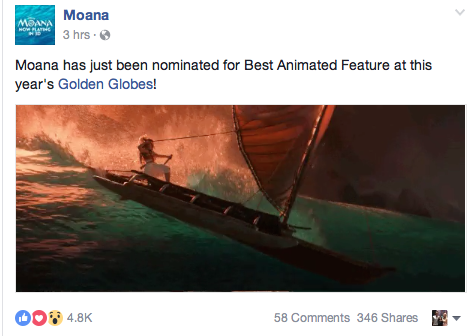 When you participate in Disney press junkets you have the chance to interview so many wonderful talent including all the fabulous actors and musicians. But time after time, the interviews that stick out the most to me are usually the directors. This was most certainly the case when we had the chance to interview the directors of Golden Globe nominated Moana, Ron Clements and John Musker. 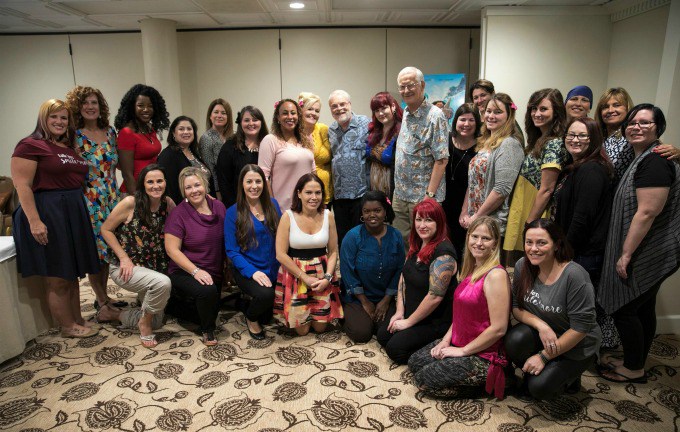 This amazing duo has been working with Disney for the past 40 years or so. They have directed some of the most well known Disney classics. Aladdin, The Princess and The Frog, The Little Mermaid, and now Moana are some of their projects under their belt.

It was so great to sit down with them and learn about animation and how it changed through the years. I walked away from the interview thinking just how passionate this duo is about their work, and how that always translates to the awesomeness of their movies.

MY INTERVIEW WITH RON CLEMENTS AND JOHN MUSKER 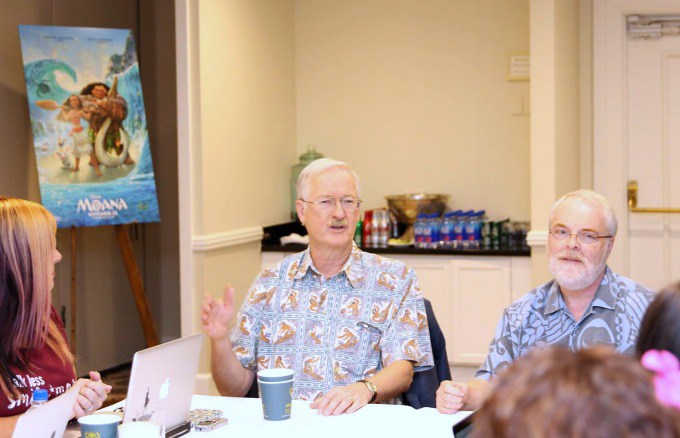 Question 1: This was your first primarily computer animated film, how was that different? Were there new challenges or new opportunities you had for that?

John Musker and Ron Clements told us there was new challenges with this.

“Some things are the same in terms of the script and the storyboarding and the voice actors. That really isn’t different. But the actual production process is quite a bit different. We had to actually have tutorials before even the movie started.”-RC

“Yeah, Steve Goldberg worked on Pros and gave us a tutorial and said these jobs don’t exist in CG. These do exist and it’s a whole different thing and one of the big things is in hand-drawn you can get going a lot quicker. You have a piece of paper, you got a pencil, you can start exploring the characters. In CG they’ve got to build the characters, literally sort of create them in three-dimensional space. They’ve got to rig them which means they’ll put all the armature in there so they can move around. They got to create the world they work in. So, it’s a longer set of time.”- JM

John also told us when they were watching these review sessions, when the movie was done in CG, they looked at it and started putting placeholders because it didn’t look like what they wanted. They perfected it to make sure it is all where they wanted everything to be. Ron told us it is very complicated with a lot of different stages.

“And the lighting. There’s a lot of cool things you can do. But a lot of things had to be figured out in the movie. Even the idea of a living ocean that has a personality of a monster, a lava monster, some of those things particularly where character animation and effects animation merge, isn’t done usually. There were a lot of things just to figure out how to do it and a lot of really smart people that sort of said we actually don’t know how to do this but we are confident that we will figure it out.”- RC

Question 2:    So, you guys have directed three out of the now five movies of princesses of color for the Disney film franchise. What steps did you take to like respect the culture but yet share it?

Ron told us they did a ton of research for this movie. They spent three years in the Islands meeting culture ambassadors, linquists, and anthropologists to perfect this movie. They really tried to get it perfect and I truly think they did! Respecting their culture and traditions was one of the most important things for making this movie.

“The importance of respect for nature, respect for the environment and also the interconnectedness and extended families and the idea of your heritage and your legacy. We heard this expression in Tahiti, know your mountain. And your mountain is essentially everything that led up to you, all the people that led up to you, everything that happened, all of the things that if they didn’t exist, you wouldn’t exist. And they said if you don’t know your mountain you really don’t know who you are.”-RC

John told us they would skype with the people of the Pacific Islands. At one point Maui was bald but then the people told him they needed to change it and so they did.

“We’ll do it more like Dwayne but then when some people saw it from Tahiti particularly they said no, long hair is part of his his power. So, he’s got to have long hair. So we said he’s going to have long hair. And so we gave him that kind of hair and now I can’t imagine him without that.”- JM 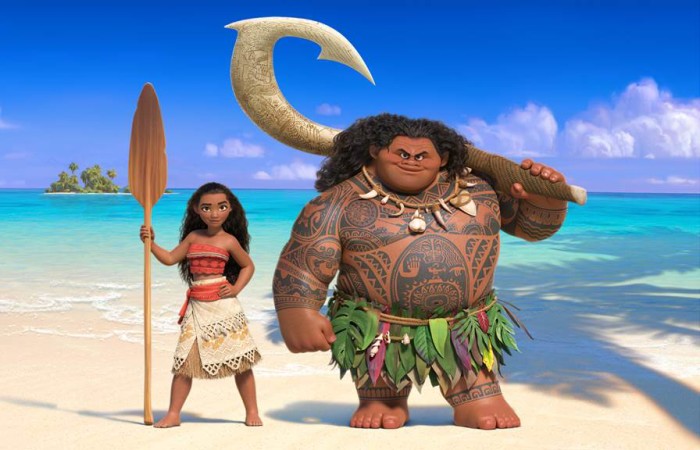 Question 3:    I read somewhere that the movie started about Maui and then changed? Can you tell us more about that?

“I was intrigued with the area of the Pacific islands. And then that led me to read Polynesian mythology and then I read about this guy Maui who was unbelievable. He was a shape shifter. He had a magical fishhook. He could pull up islands. He had tattoos, kind of a superhero. And I was like why has this never been done in a movie before? And so I showed it to Ron. We pitched a simple idea to John Lassiter and that is how it evolved.”- JM

“And it was even kind of called the Mighty Maui. This was sort of the original title. Then John’s like you got to do research. You got to go to the islands.

And when we went there and we heard about navigation and all this and it was really Ron’s idea, what if we have a character called Moana, which means ocean and we built it around her, someone who wants to be a navigator like her ancestors. She’s the focus of the story and so it was a challenge when we were making the movie always to keep her at the center. Sometimes Maui, because he’s kind of like a magic character, he could start to rise up and we said no this has got to be in the service of her story. So we were very strong in terms of keeping the focus on Moana when Maui threatened to take over sometimes.”-JM

“It was really a hero’s journey. We thought of a hero’s journey for Moana. She has to be on a quest to save her people. She faces numerous obstacles. She’s resilient. She’s also empathetic, which is an important part of who she is and fearless and that she really finally proves herself and becomes the person that she’s meant to be.”- RC

Question 4: How does it feel to have worked on The Little Mermaid and now on Moana? Did the transition of 2-D to 3-D change the way your vision developed for the end result?

“ Well, it was interesting even just in a superficial way. A lot of the animation we work on, the CG animators, a lot of them are in their 20s and 30s. They saw Little Mermaid when they were eight years old and there like this is what got me in animation. I’m working with you old guys, you know. So, that was kind of fun. “- JM

“I was 20 when I started at Disney, been there 43 years. I think John’s close to that. I worked with Frank Thomas who’s a legendary animator, who was my mentor and he was 62 and I was 20 and now I’m 63 and we’re working with a lot of very young people and people that are really excited and eager.”- RC

“It was fun on this movie though because in terms of the CG and the hand-drawn we got to use both. And Eric Goldberg who did The Genie and Aladdin did mini-Maui and the tattoos. So, we were able to incorporate hand-drawn elements. We’re thrilled to get a chance to work with Eric where they would do the CG Maui and he would do the hand-drawn part and they could kind of learn from Eric and see his techniques in terms of the acting and his timing and his comic sensibilities. They were thrilled to get a chance to learn from this kind of living legend of animation. So, it’s been fun for us to learn new things and work with new artists. So, that’s been the really fun part of all this.”- JM 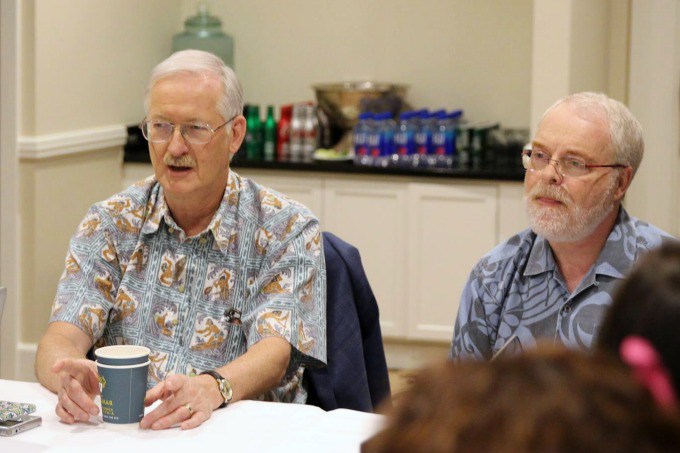 Question 5: Are you doing more movies after this one?

John told us he does not know what they are doing after this one. It has been five years in the making and promotion now, so they are going to take some time off. But they will be back and can’t wait to get started on the next one.

Question 6:    I have noticed some Easter eggs when we saw this movie, Squirt in the very beginning, which was adorable and of course Sebastian in the end credits. We then wanted to know if there are any more?

“There are many others and we will not tell you what they are. We will give you some clues. They’re really interesting and some are very difficult. Some are a little easier, some are not. But Olaf is in the movie. And you might think how can a snowman be in there, but he’s in there a couple of times.”- RC

“In a tricky way. Flounder from Little Mermaid is in there briefly.    You may have seen Flounder. And actually, Flash, the sloth from Zootopia. Baymax was in there”- JM

I have seen this movie three times so far and I think I only identified 6 of them. How many did you get??

It was so incredible interviewing the directors of Golden Globe nominated Moana! Moana is now in theaters and should be seen by all! It is truly a spectacular movie. If you are interested in seeing more about Moana, check out my review of this movie.