Have you guys all seen Doctor Strange? If not, what are you waiting for? RUN RUN RUN to the theater near you and see this magical movie. It is that good!

While in LA during the #DoctorStrangeEvent, I had the honor to interview many celebrities from this wonderful movie including Benedict Wong. If are unfamiliar with Benedict Wong, you will not be after seeing this movie. Some of his credits include Marco Polo, The Martian, and the upcoming Avengers: Infinity War.

While I LOVED all the interviews that took place, the Benedict Wong interview was one of my favorites. In Doctor Strange, he is the lead comic and his personality matches that exactly. He is SO FUNNY! I cracked up so many times during this interview. Don’t forget to read the interview and then go listen to some Beyonce( you will get the joke after seeing the movie)!

MY INTERVIEW WITH BENEDICT WONG: 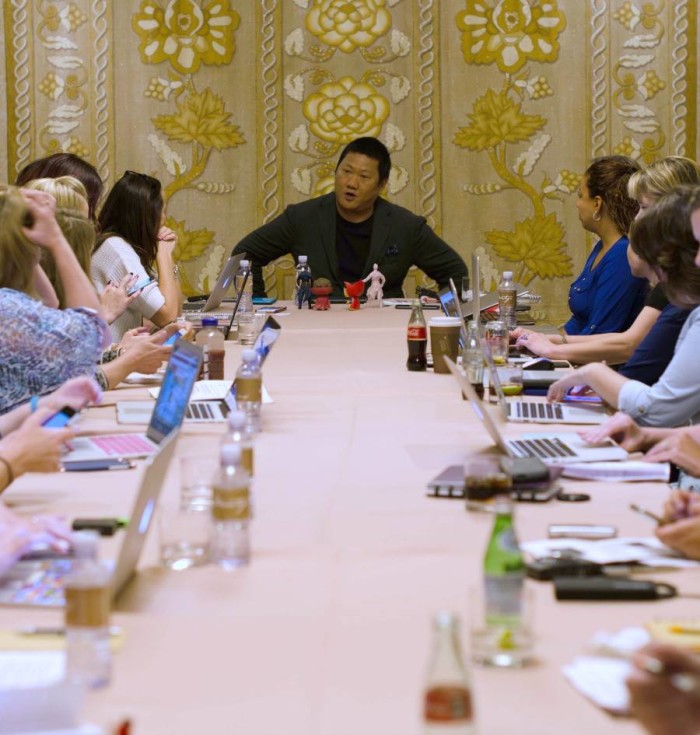 Question 1: What was your favorite moment behind the scenes?

“I think when we came back in LA, we did a bit of additional photography. I was just looking over incredible costumes as we were walk into Santorum again. I just thought, oh this is just great. Sometimes, they’re just beautiful moments and you just get that warm, fuzzy feeling. I think it was just a warm fuzzy Actor Production feeling. I just thought Aw Wow. It’s culminated into something really wonderful. Sort of a mixture, sort of childhood dreams, to sort of being in kind of the Marvel Universe. Yeah, I was thrilled.

Question 2: How long did it take for you to correctly film the whole Movie? 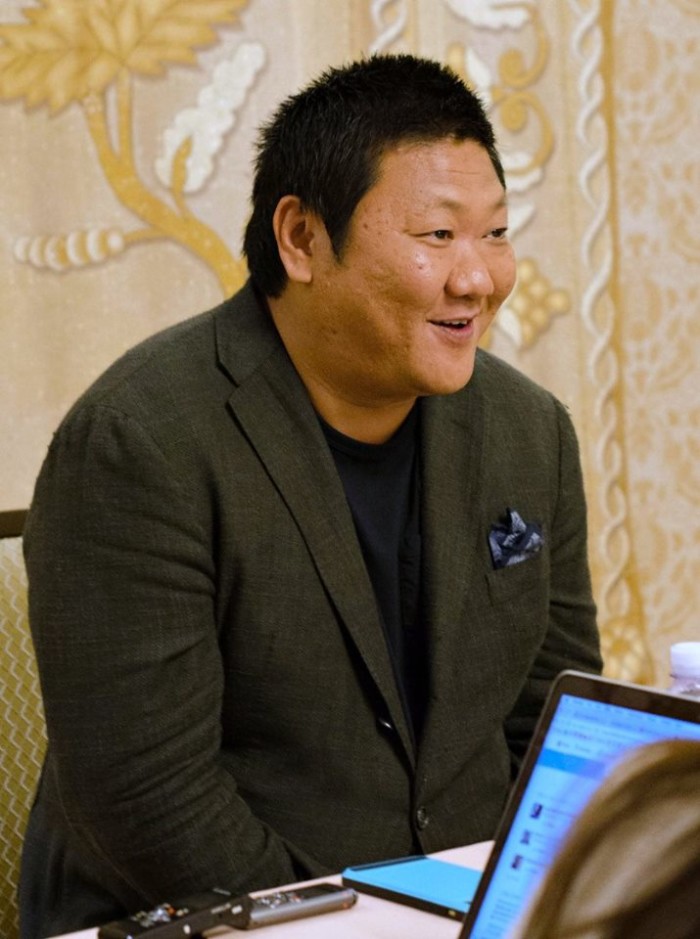 He told us he was filming for Marco Polo for several months so he was traveling around the world. He was auditioning in Budapest and sending tapes in from Slovakia. Then when he found out he was in Malaysia. He then flew back to London, dumped his bags, and went straight to set.

Question 3: Did you feel a lot of pressure from such an iconic role?

He told us he used to collect a lot of Marvel comics. He was a big Spider Man fan. He never knew much about Doctor Strange. Then when he saw Chiwetel for lunch he asked what he was up to. He told him he needed to do this Doctor Strange and of course in it was a Wong character (I LOVE THIS)!

“And then there was a Wong Character. I was like what? I was always so crestfallen that there were no Asian Superheroes, like where are the Super Asians. It’s like why I have to simply get this by birthright, you know like Ancestors will not let me live this down. Bit by bit, the kind of stars aligned and they kindly moved the dates and it kind of went straight into filming.”

“There is an element of certain roles that they played in the ’60s which I think, we would really be doing with updating this for a modern Audience and then with that, I’m thrilled about the fact that he is this really kind of Drill Sergeant, that is really standing alongside with Strange. You know, they kind of fight in this Multiverse as we sort of introduce this into the Audience.” 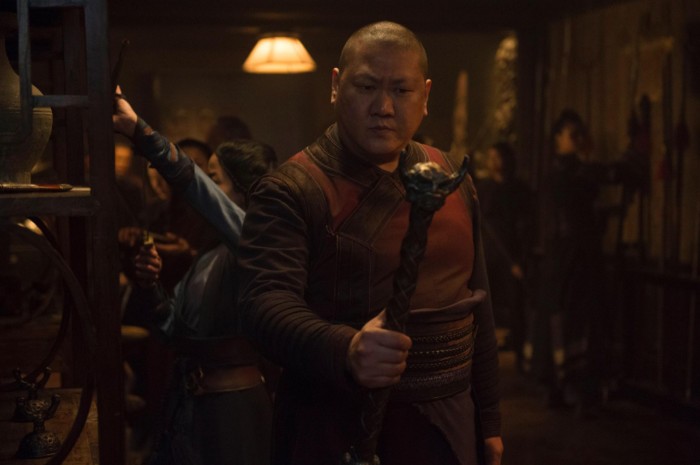 Question 4: Is there a line from your script that became more ear work for you from repeating it over and over and it just, I don’t want to say haunted you, but has stuck with you? 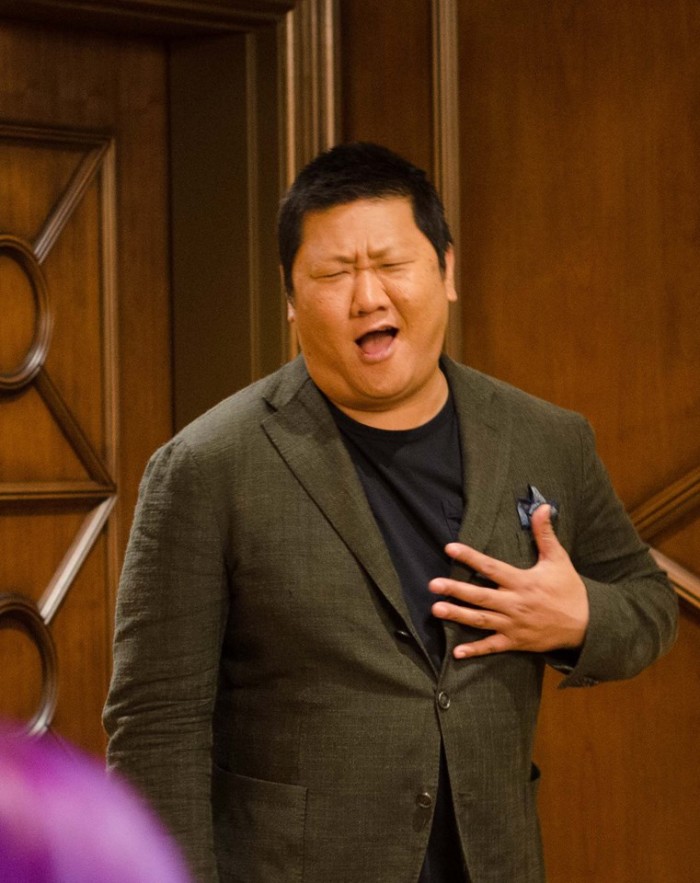 Yes. Benedict’s doing this elaborate spell which probably takes about a minute and then Chiwetel and I are kind of waiting in the wings to come down and obviously chastise him for breaking, space/time continuums.

“I couldn’t really get the words out. It was so he is doing this Minute spell and then we come down and Chiwetel’s like what’s up with the space time continuum. And I was like pup, pup, pup. And I was like let’s go get it. So I think like the jet lag was taking effect as we were was doing this Minute elaborate spell. I was creating my own black hole and then we were literally going into double figures.”

“And it was like I had to be sent home. So by the next day, we were all back on track but I think that was the kind of a bit of a wobbler.”

Question 5: Do you have a favorite line,that actually made the cut of yours or another Character? 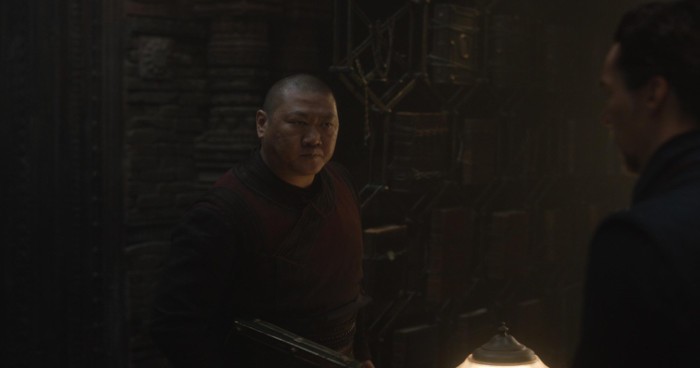 “I don’t really have favorite lines to be honest. I love all my lines. I love part of the scenes. As long as we’re telling, you know, I’m this cog. I just feel like I’m a cog in a part of these amazing machines. And everyone’s in it as well and special effects and the writing teams and everyone and the crew. Everyone’s just putting so much energy into this. I can’t wait to see it and just see what we’ve come up with.”

Question 6: Which side do you relate to more in real life? 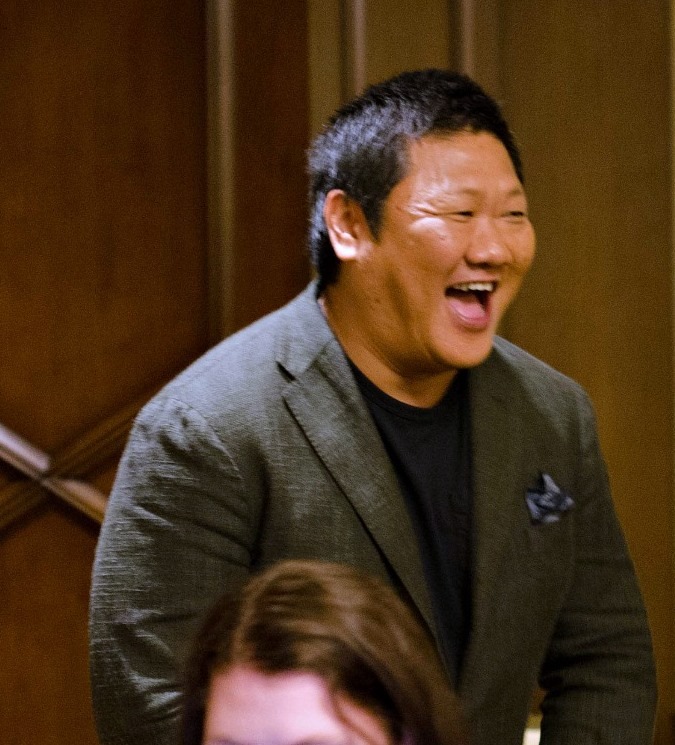 “I’m a little bit of a goofball really, like a serious goofball. I think they’ve kind of got a very interesting relationship. They’re a little bit chalk and cheese. He’s got these incredible mystical powers. I think he’s also there to put in check and help him guide him through this crazy multiverse that we’re about to encounter I think.”

Question 7: So you said that this role was meant for you. What was your reaction when you got the role, that moment?

He told us he got the call from Sara Finn. He couldn’t tell everyone in the beginning. He was so excited to be in a Marvel film.

“When someone gives you this secret and you go, don’t tell anyone. Just like there is ball, but it’s kind of, I don’t know, all these sort of things where you just become and think wow all of this investment of all my pocket has really paid off in my adult life. And it’s like really good, reverb back to you. It’s wonderful.”

Question 8: Do you have anything quirky you like to do on set, maybe just like always follow the camera guy or look at your cards, or anything funny that’s specific to you?

“What am I always doing? I don’t know. I never actually went to Drama School and I’m always kind of sort of always doing little funny voice warm up exercises, even if you’re bending over and you’re letting your tongue hang out.”

“I’m practicing my enunciation and then the Director walked past and tapped me on the back going yes, do it like that. And I go what? I was going no because it was a vocal warm up and then you’ll see me doing it in a scene with Tim Robbins like Daffy Duck or something like that or Porky the Pig.”

Question 9: If you could have any Super powers in the world, what would it be in real life?

He told us it was the power of understanding and unifying that everyone is one.

Question 10: In developing the Character of Wong for yourself, what sort of research did you do? Did you read a lot of the older Dr. Strange, some of the newer stuff, outside influences?

“I first picked up the oath so I just kind of had a little look at that. And then, as I said, it was like certain aspects of that, Man Servent to a Tea, kind of sidekick, were just sort of, took it back into the 60s and leave it there and for me, as an Actor as well, I’m always looking for a flow, what we can we do to promote a positive role model. And the fact that I feel this kind of stoic strength of Wong that is serious but he’s very serious about the severity of what is about to happen really and these forces that we do not know.”

“And obviously with the story of this arrogant Neurosurgeon becoming a broken man coming to find himself being humbled that he has a place that is bigger than himself. I’m thrilled to sort of play this role and I think Marvel, Kevin, and the gang are doing a great job really to kind of promote that.”

See Benedict Wong as Wong in Doctor Strange this Friday!!