I am going to take you back to March of 2014. I vividly remember my best friend asking me to come out to Florida to run the Princess Half Marathon. I remember looking at her and thinking she was insane! Running..Me..No way! However, in the back of mind, I knew I really wanted to do it so I could check something off my bucket list. So, low and behold on July 9, 2014, I signed up for the Princess Half Marathon at Disney World. I remember that day all so well because it was exactly 2 days after I gave birth to Taylor via C-section. 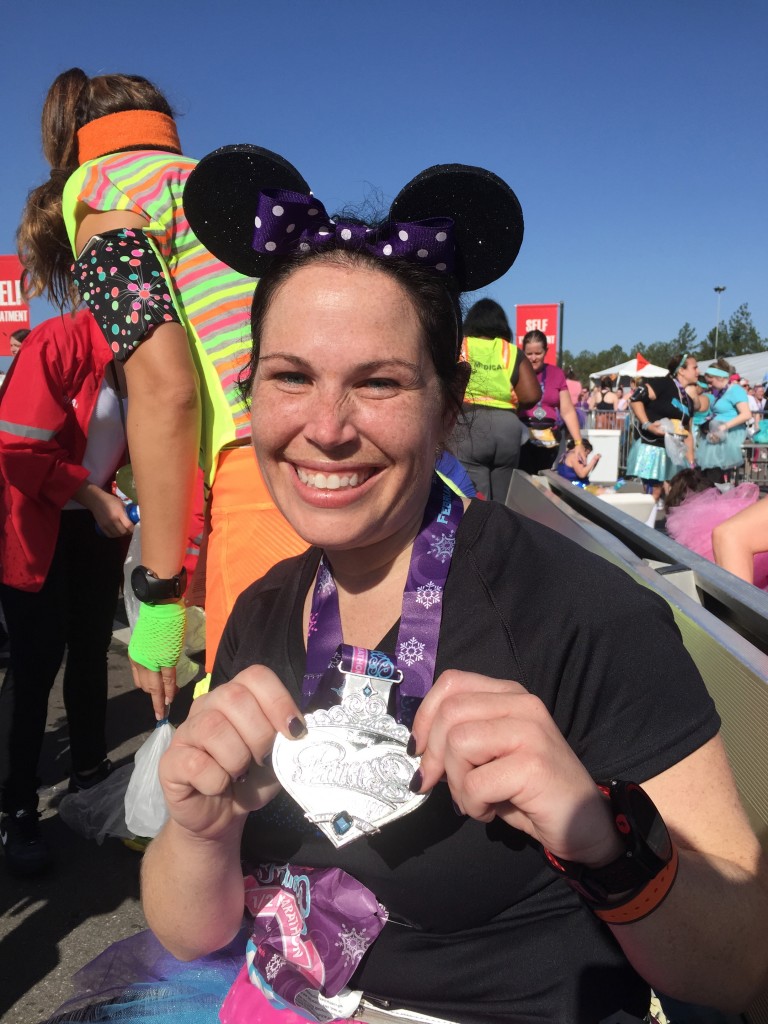 Training for me officially began early October but I did run one 5K towards the end of September which was horrific! So, I was not sure I was really going to be able to conquer the half marathon. However, I was determined so off I went one cold day to start my training using a modified version of  the Hal Higdon version. 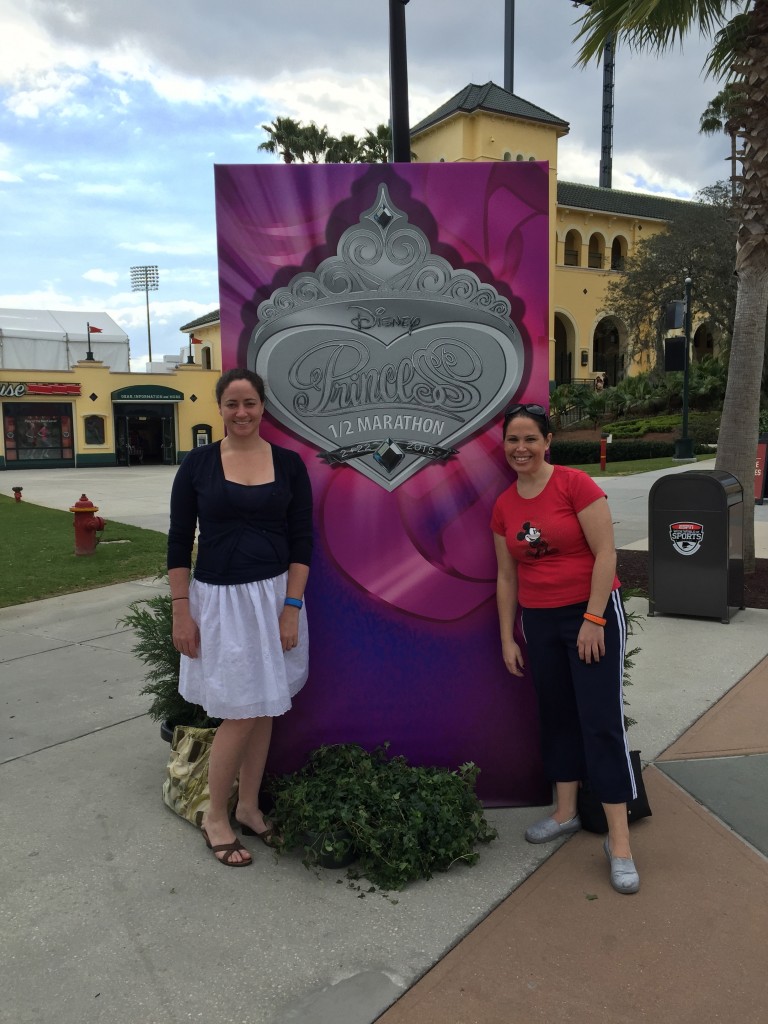 Training was going great (that is when I had time with 3 small kids under the age of 5 at the time) but I was determined. In my training, I reached about 8 miles until I got hurt and got hurt bad. After some time, they finally figured out I had a partial tear of my tibialis which certainly put a stop in my training. I rested for a bit and it was off to see the orthopedist to see if I could run in the Princess Half. 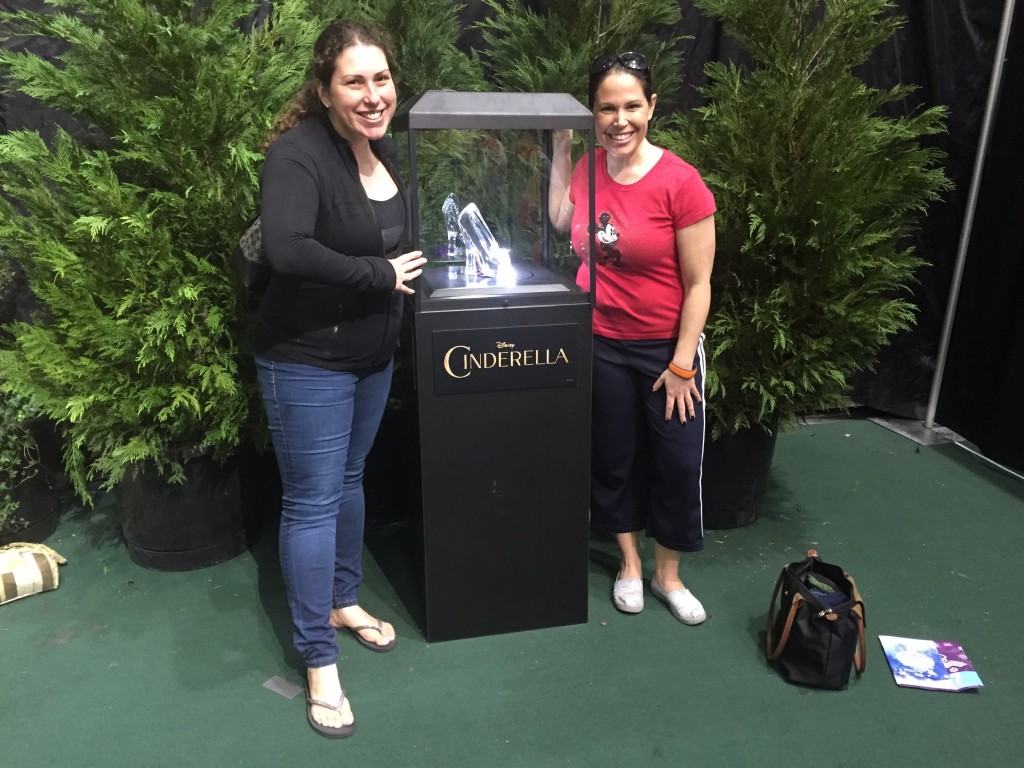 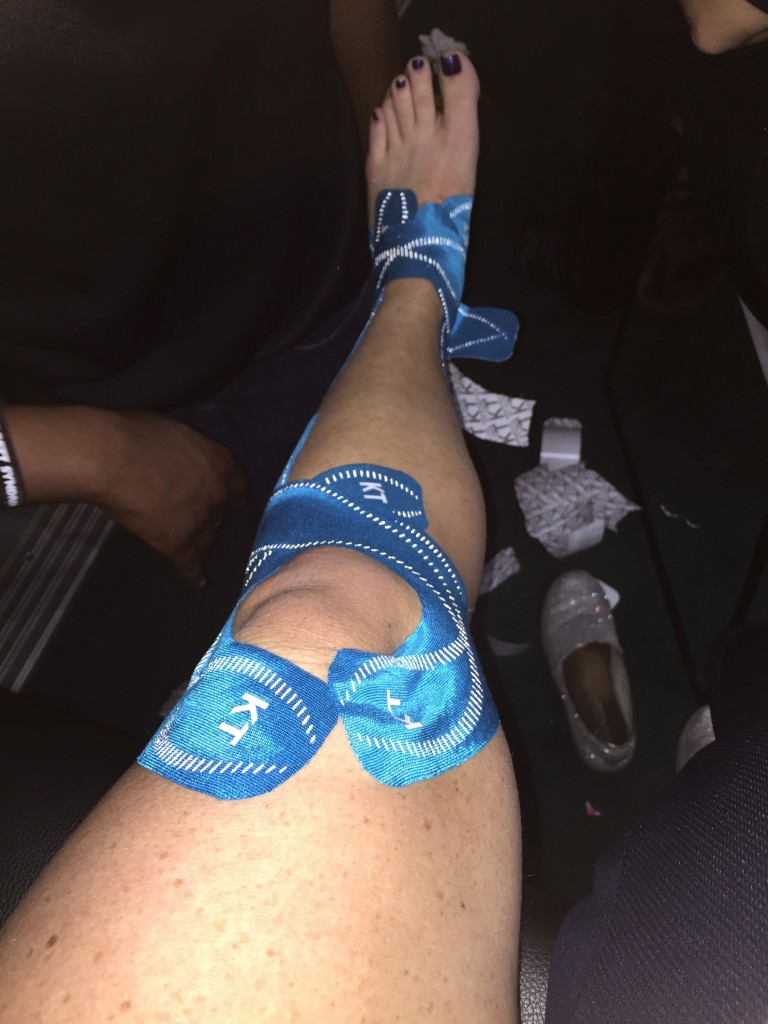 While he did not give me the 100 percent green light to run, he did tell me that I could run as long as I was not in pain. After pain hit, I should switch to walking. I was to use pain as a gauge and stop if it was too much. I was determined to go and get the shiny medal that comes after you finish the Princess. So I packed my gear, my KT tape, my brace, and my beans, and headed to sunny Orlando. 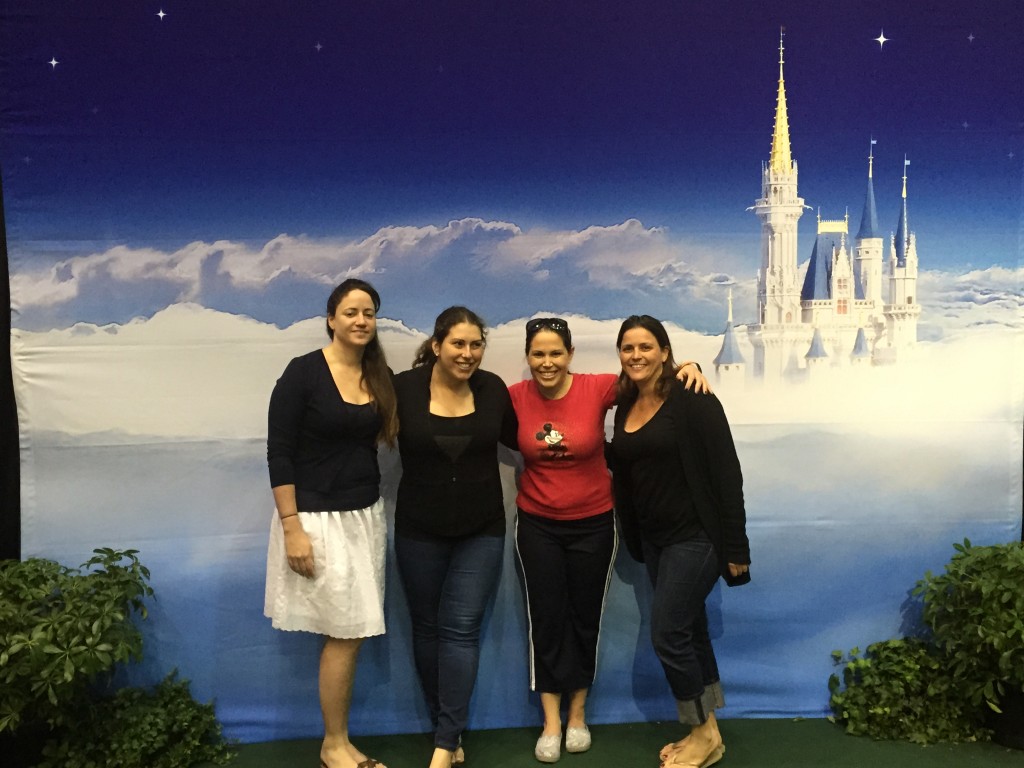 I was notified that I would be put in coral O which is the second to last coral. This was very bad news because with Disney races, if you do not maintain a 16 min/mil the entire race, you are “swept” from the balloon ladies, who start timing the speed the minute the last runner crosses the start race. While this made me nervous, I was not going to let it stop me from trying. 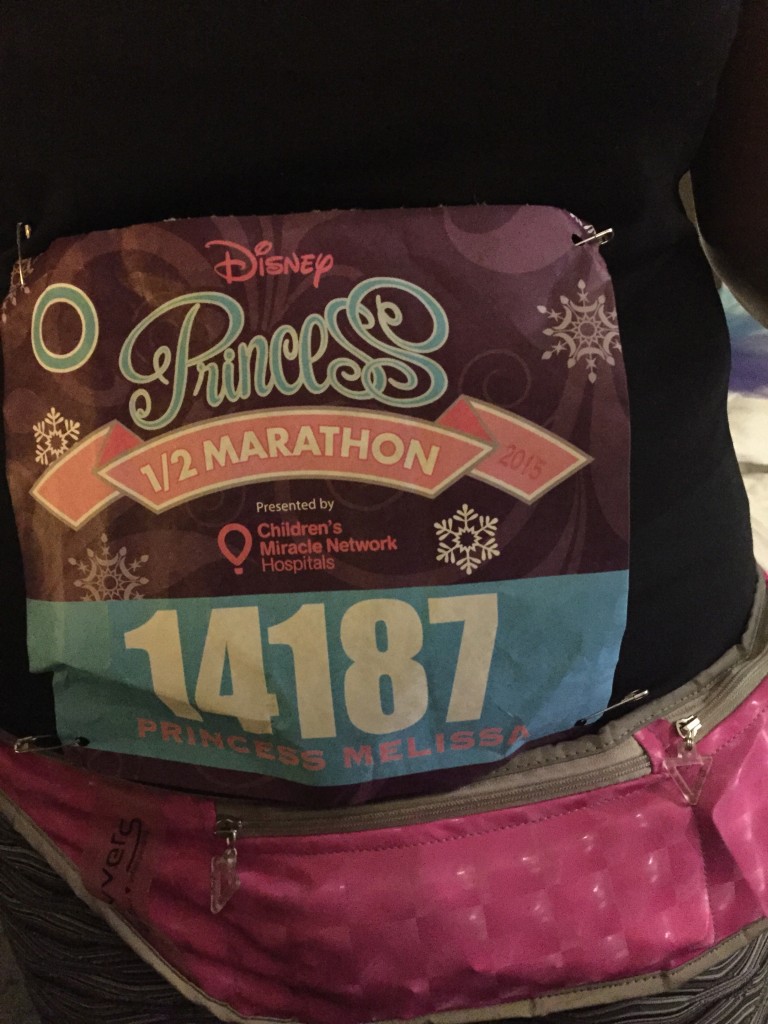 We arrived at the start which is near the Epcot parking lot and waited. Then we waited some more. The elite runners were sent off at 5:30 AM but since we were in the second to last coral, this meant our start time was to be around 6:45 AM. However, I will tell you that this hour will go by VERY FAST! You meet your fellow runner and the sheer adrenaline gets you through the waiting period. 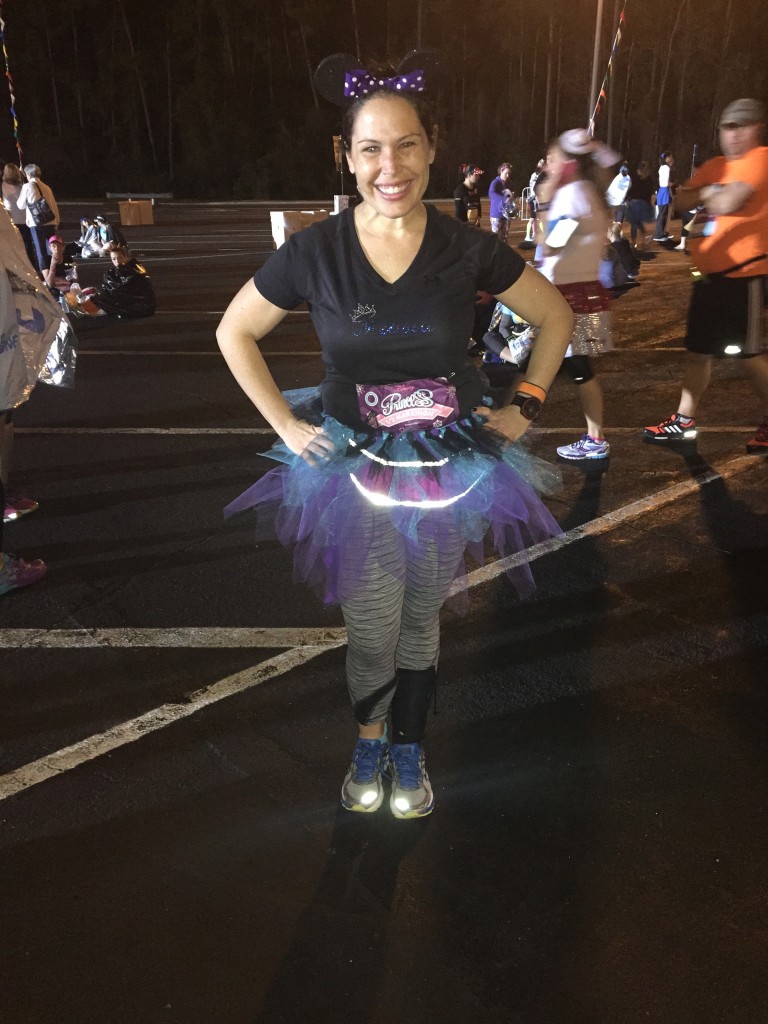 Then 6:45 AM came about and coral O was sent off to the sounds of Frozen’s, Let it Go! This was all so exciting as we proceeded to start our race. At about mile 2, we began to see our first characters which were the pirates. A lot of people stopped but I needed to finish the race, so I wanted to gauge where I was before stopping for pictures around mile 5.

I have to say the excitement of running this race is amazing. There are bands lining the streets at the wee hours of the morning encouraging you to run and to finish the race. I am not sure I would have been able to finish if this was not a Disney race.

Mile 0-5 were run mostly on highways but honestly, you never for a second got bored. It was so magical in every sense of the word. I started out mile 1-3 going very strong and finished the first 5K in about 33 minutes. As mile 3 came, I slowed it down to about a 12 minute mile and decided to at that point to mix it up with running and walking. I ran a lot but I also walked a lot. I needed to do what I needed to do to get my ankle through that finish line.

Mile 5 we entered the Magic Kingdom. Since my time was going well, I decided to let the professional photographer take some pictures of me at the castle. Simply said, that was one of the most amazing experiences throughout the whole race. Oh, and seeing Anna and Elsa from the bridge high above. My girlfriend and I took a lot of selfies throughout the race so we wouldn’t have to wait on all the lines too! 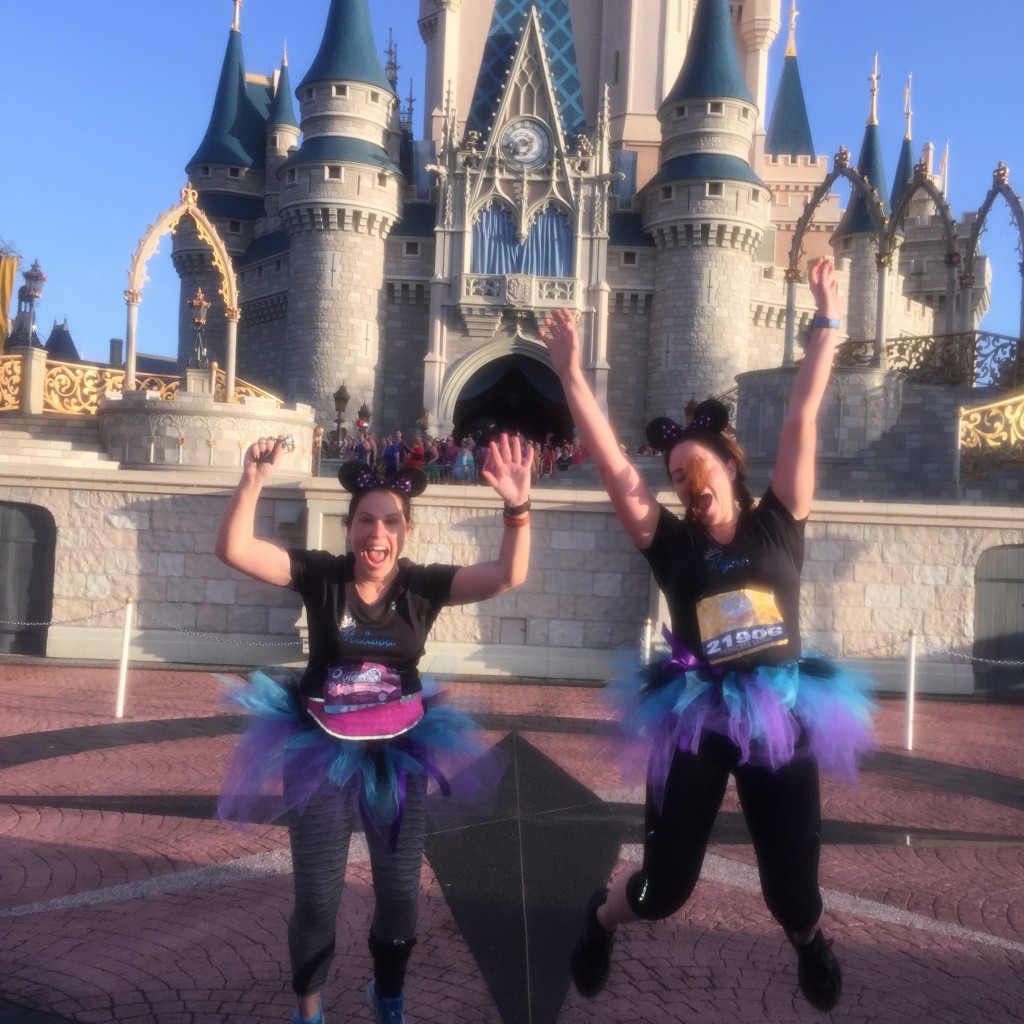 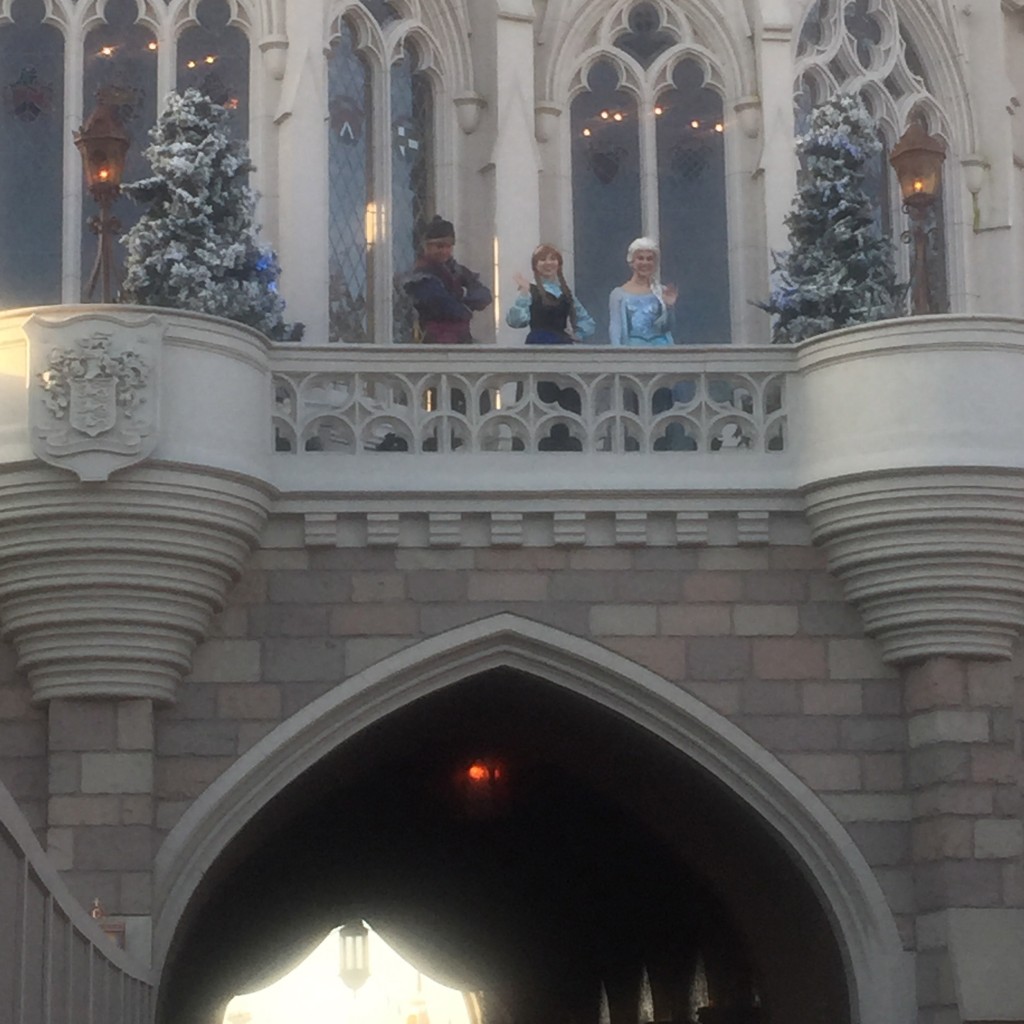 Then it was out of the Magic Kingdom and onto our final destination, Epcot! I proceeded to run a good deal and then pain struck. And struck hard. I stopped for about a minute or two to take my a drink of powerade( they have that and water available at the race) along with tylenol. After a few minutes, I was determined to finish this course even if it meant running/walking. 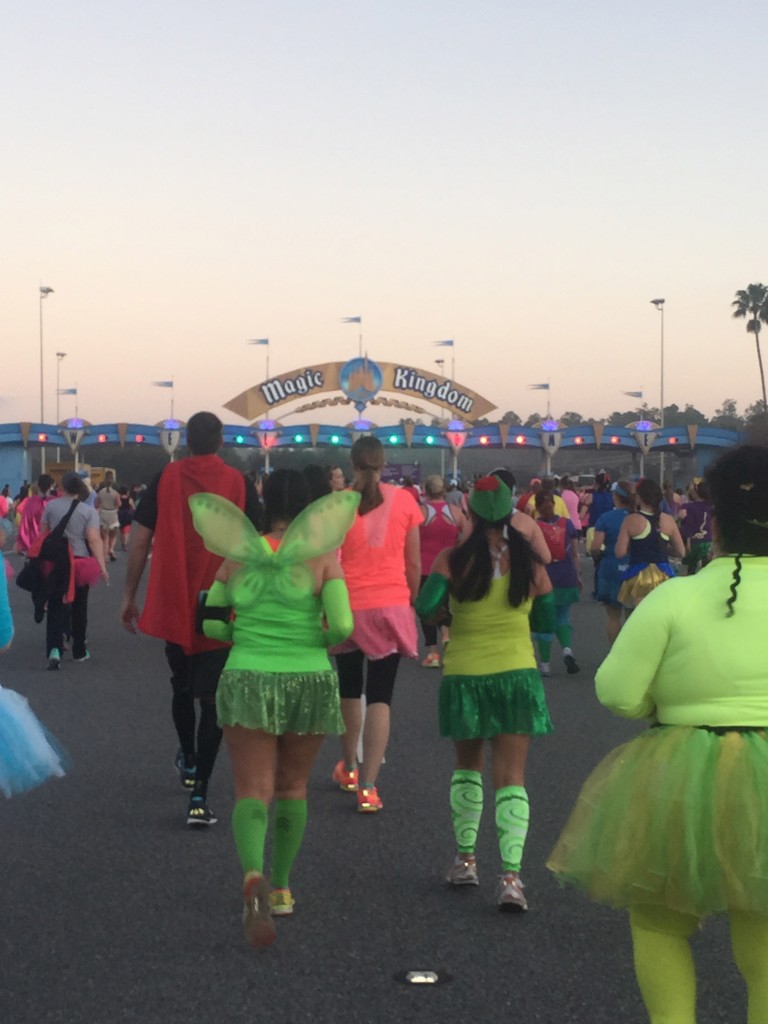 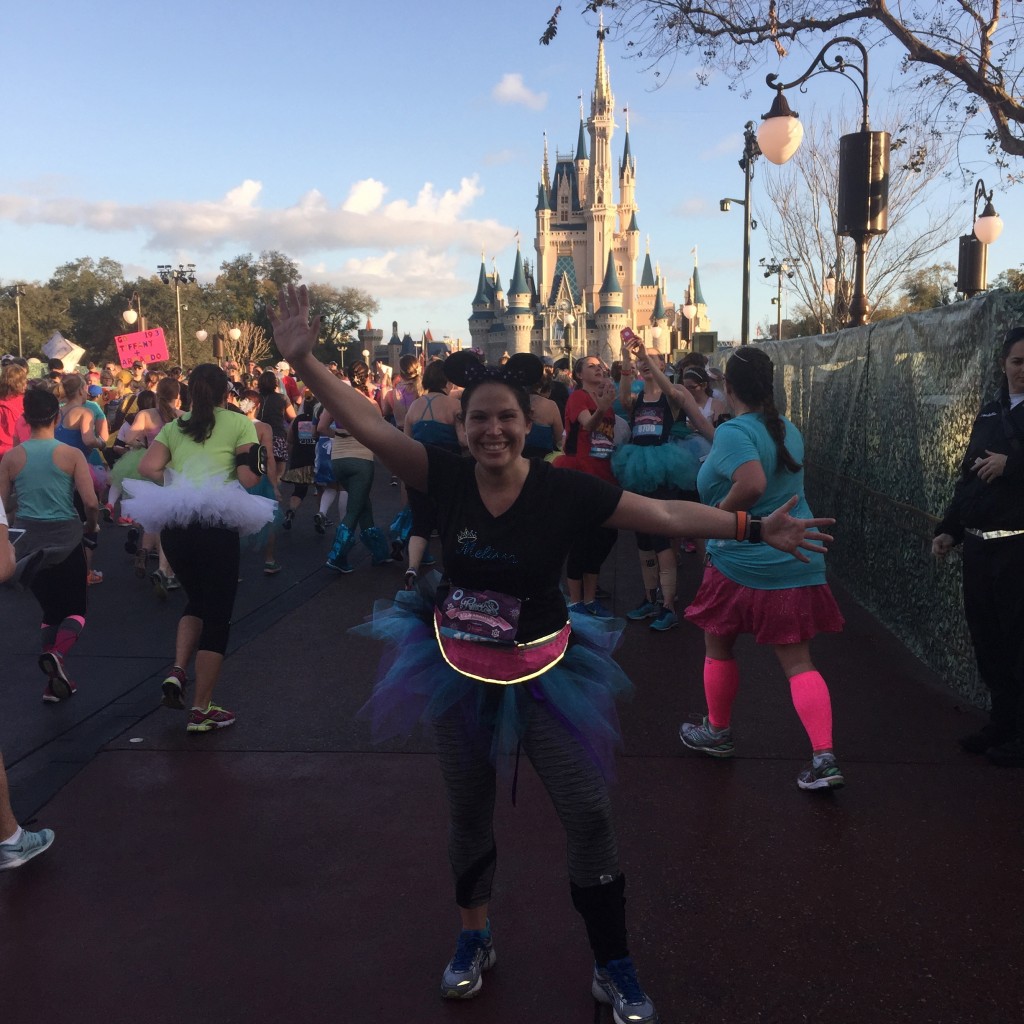 While I did not stop with any more characters, there was plenty on them on the remainder of the race course to stop if you wanted.  I just stuck with my selfies. At mile 11, I knew with confidence I was going to finish the race and made it my mission to try my hardest. We entered Epcot around mile 12 and I finished mile 13.1 at 3 hours, 4 minutes! Not too bad for a girl who was injured! 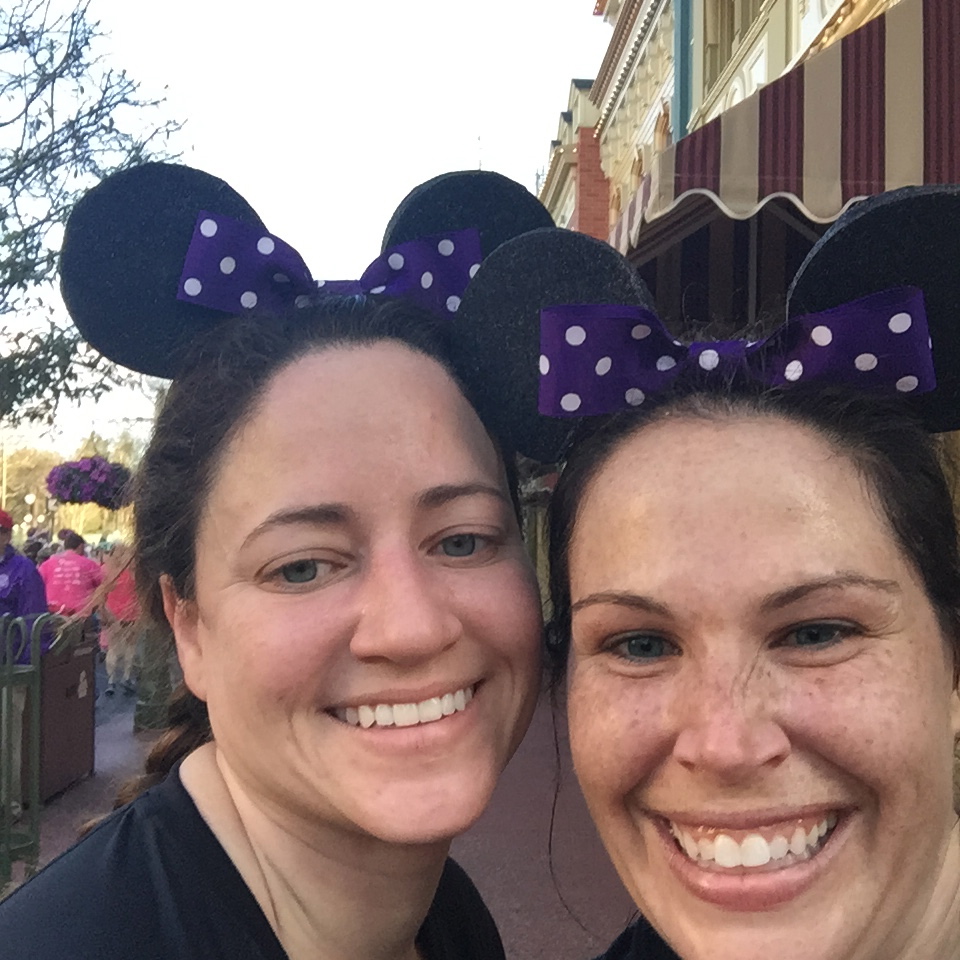 While I am still injured, I am given the green light to train again with a mixture of walking and running since I took some time off after the race. I now really love running and especially Run Disney. There is nothing more magical than a Disney Race. I will be back because you will see me at the Disney Wine and Dine this November. Come and say Hi! 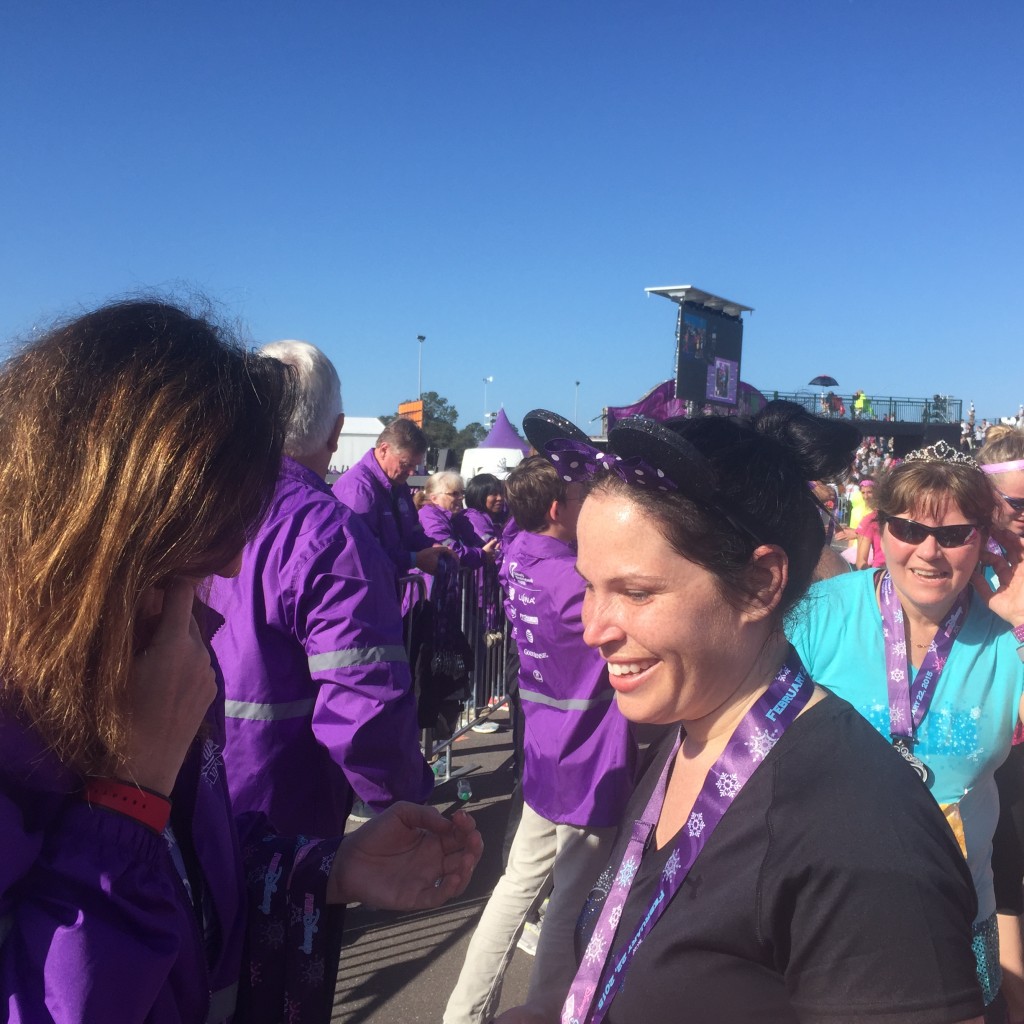 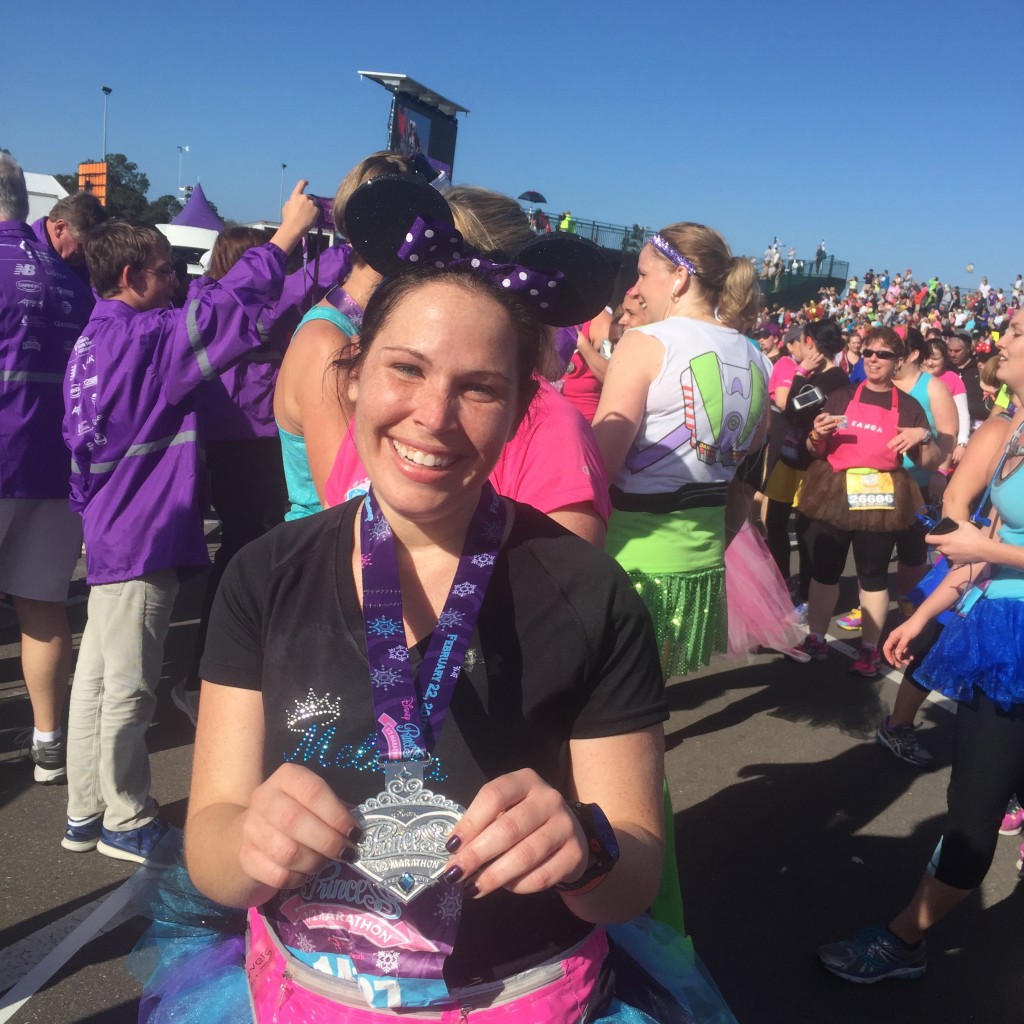 Stylin’ in their Stride Rite Shoes!!
INSIDE OUT – Family Activity Sheets Now Available!!