Are you all excited?! The wait is finally over and STRANGE MAGIC (which is from the mind of George Lucas) is now playing in theaters everywhere!

Synopsis: “Strange Magic,” a new animated film from Lucasfilm Ltd., is a madcap fairy tale musical inspired by “A Midsummer Night’s Dream.” Popular songs from the past six decades help tell the tale of a colorful cast of goblins, elves, fairies and imps, and their hilarious misadventures sparked by the battle over a powerful potion. Lucasfilm Animation Singapore and Industrial Light & Magic bring to life the fanciful forest turned upside down with world-class animation and visual effects. Directed by Gary Rydstrom (“Toy Story Toons: Hawaiian Vacation,” “Lifted”) from a story by George Lucas, “Strange Magic” will be released by Touchstone Pictures on Jan. 23, 2015.

To get you excited here are some FUN FACTS! 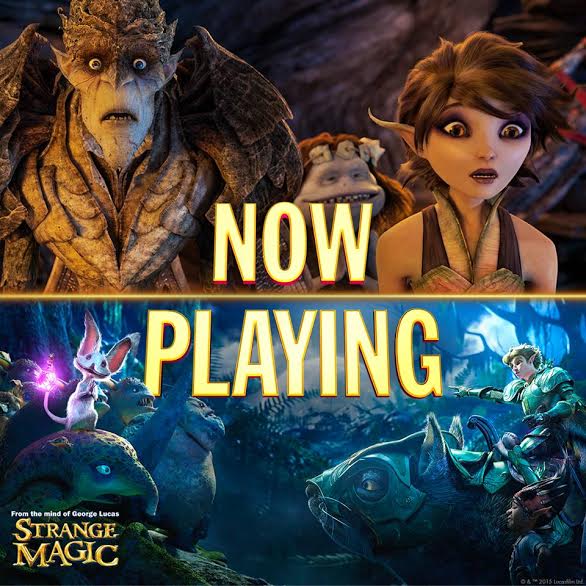 NAME THAT TUNE – “Strange Magic” weaves together new versions of favorite songs from the last six decades—including songs made famous by artists ranging from Mickey & Sylvia and Elvis Presley to Kelly Clarkson, Beyoncé and Lady Gaga.

HE LOVES ME, HE LOVES ME NOT – Filmmakers needed to concoct a magical love potion for the film, so when they discovered that primroses grow where shadow meets the light (part light/part shade)—they knew they had their chief ingredient for Sugar Plum Fairy’s love potion. In the movie, primroses aptly grow on the border of the Fairy Kingdom and the Dark Forest. In an effort to do away with love forever, the ruler of the Dark Forest, Bog King, orders every primrose destroyed.

FLY AWAY – Artists referenced monarch and blue morpho butterflies to create the look of fairies like Marianne, Dawn and Roland. Animation was customized for each fairy and designed to reflect individual personalities and where they were in their character arc. Marianne, for example, goes from clumsy to athletic during the course of the film.

BUGGY BOG – Artists looked at dragonfly wings and grasshoppers when creating Bog’s look. As far as Bog’s performance, animators took him from hunched over and angry to elegant.

GOOD GOBLIN – Artists and animators referenced frogs, lizards and other amphibians and reptiles to perfect the look of goblins like Stuff and Thang.

ANOTHER FINE MESS – Stuff and Fang, Bog’s loyal goblin assistants, were created in the spirit of famous comedy teams like Laurel and Hardy and Abbott and Costello.

THE TRAMP – Charlie Chaplin and his best-known character, The Tramp, served as inspiration for Imp. Both characters cause trouble for no good reason, so animators added Chaplin-esque flourish to Imp’s movement.

REAL ROCK – Lucasfilm artists tasked with creating the royal palace for Fairy King and his daughters found reference in Big Rock Ranch, a property George Lucas owns. A smaller rock was discovered on the property that looked like the signature rock. It was scanned and used as a 3D model for Fairy Rock in the movie—which hosts the great ball.

FRIGHTENING FERNS – Filmmakers found fun foliage to help illustrate the spookiness of the Dark Forest. Fiddlehead ferns, which feature furled fronds, were very effective tools in the film: one unfurls as Marianne makes her way through the forest.

JUST DREAMY – “Strange Magic” is inspired by Shakespeare’s comedy play “A Midsummer Night’s Dream,” and includes a controversial love potion, the theme of love and the spirit of feminism, as well as an infusion of comedy. But the characters in “Strange Magic” are wholly unique—with striking looks and compelling personalities.

SISTER, SISTER – Just like her character Marianne, actress Evan Rachel Wood has a little sister and says she can relate to Marianne’s desire to look out for Dawn. Likewise, Meredith Anne Bull, who provides the voice of Dawn, has an older sister.

THAT’S NUTS – Roland, a knight in shining armor (at least in his head) makes his way through the forest atop his loyal steed Chipper. But Chipper’s not a horse—he’s a squirrel. 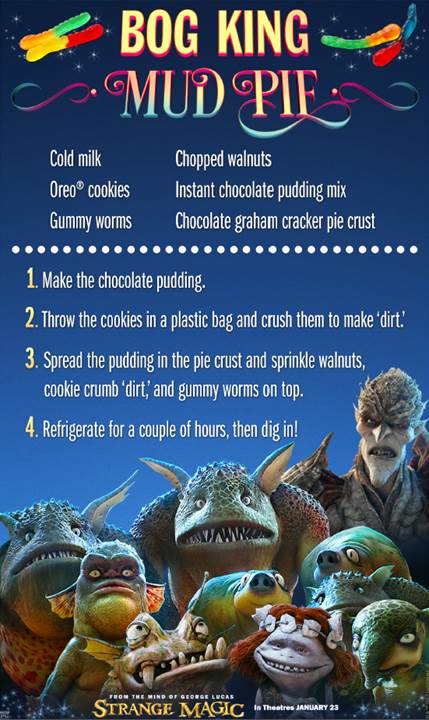 Tweet
Share
Pin
0 Shares
Banquet and Chef Boyardee on Rollback at Walmart!
Hayley and Zane are Stylin’ in P.S. Aeropostale