Nickelodeon’s CGI- animated hit series is back with their second season DVD, Teenage Mutant Ninja Turtles: Enter Shredder. Get lean, mean and green this summer with the Turtles team! Leo, Donnie, Raph, and Mikey take to the streets of NYC and every turn yields a new enemy. Get ready for non-stop battles against Kraang- droids, mechanical Mousers, a mutant alligator and even the evil Shredder himself. Plus, as an added bonus get a free collectible TMNT poster inside for a limited time only. Created by Nickelodeon Home Entertainment, and distributed by Paramount Home Media Distribution, Teenage Mutant Ninja Turtles: Enter Shredder is available now on DVD for $14.99. 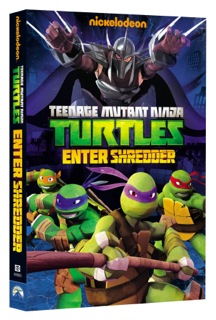 The TMNT are back and better than before in this DVD which is now available on Amazon! I might even dare to say that I like this remake better than the original. Let me know what you think!

-We received the DVD for review purposes. All my opinions are my own and not swayed by outside sources.